Navy warships will sail close to a second disputed Chinese island in the South China Sea soon in a further challenge to Beijing’s military buildup and maritime control, according to defense officials.

The next Navy operation in the sea will take place in several weeks near Mischief Reef in the Spratly island chain that is claimed by China, Philippines and other regional states, said officials familiar with the upcoming operation.

The maneuver also is expected to include two Navy warships that will conduct military operations within 12 miles of the reef, the officials said, as a way of stepping up the U.S. military presence in the disputed waterway.

The reef is 150 miles from the Philippines, which has claimed it as its territory, despite the Chinese island dredging in the Spratlys and other parts of the sea. 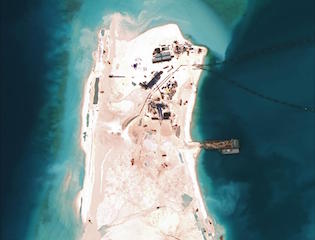 Mischief Reef is one of three islands in the Spratlys where China is said to be building runways that are expected to be used by the Chinese military that is seeking "de facto control" over the sea, according to the U.S. Pacific Command’s Adm. Harry Harris.

Satellite images disclosed in September revealed stepped up construction on the reef and indications of an airstrip. 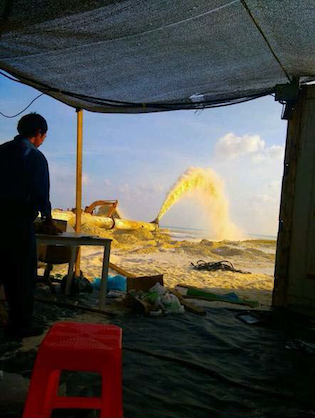 The Pentagon has said such passages are permitted under international law. China, however, since 2009 has imposed a vaguely defined territorial line around most of the sea where an estimated $5 trillion worth of trade passes annually. Beijing is demanding that U.S. warships stay out of the region.

During the Oct. 26 naval operation, the first in the area since 2012, the guided-missile destroyer USS Lassen passed close to Subi Reef, also part of the Spratlys, where China is building military facilities.

The Lassen’s Subi Reef sail-by angered China’s communist government and military whose spokesmen called the transit an illegal incursion of Chinese territory and a provocation.

Tensions remain heightened between Washington and Beijing over the Chinese encroachment in the region.

President Obama said on Wednesday after meeting President Benigno Aquino of the Philippines that China should halt the militarization on some of its 3,000 acres of newly built South China Sea islands.

"We discussed the impact of China's land reclamation and construction activities on regional stability," Obama said. "We agree on the need for bold steps to lower tensions, including pledging to halt further reclamation, new construction, and militarization of disputed areas in the South China Sea."

The head of China’s navy bluntly demanded on Thursday that the United States stop what he called military provocations in the sea.

"The U.S. conduct does not contribute to peace and stability in the South China Sea whatsoever," said Adm. Wu Shengli, who defended the island-building as legitimate.

"The U.S. cannot impose its own claims on other nations. It cannot sabotage other nations’ sovereignty and security," Wu said.

Wu made the comments during a meeting in Beijing with Adm. Scott Swift, commander of the Navy’s Pacific Fleet.

The same day Wu made the remarks, China’s official Xinhua news agency declared in a commentary that U.S. freedom of navigation operations are "hegemonism" in disguise.

"Washington's promotion of maritime militarization and threats of other countries’ sovereignty and national security in the disguise of navigation freedom are against international laws," it stated. 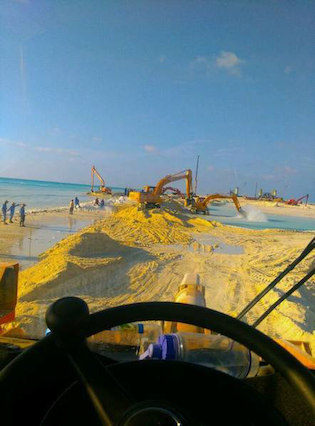 Earlier, Defense Secretary Ash Carter visited the aircraft carrier USS Roosevelt as it sailed in international waters in the sea. Carter stated during the ship visit that U.S. forces would not be deterred from sailing ships or flying aircraft through international waters or airspace in the region.

In addition to protesting the Lassens naval passage near Subi Reef, where a very large runway is under construction, China denounced the recent passage through the sea by the Roosevelt, claiming it was a violation of Chinese maritime sovereignty because the United States did not request permission for the transit.

Mischief Reef was seized by China from the Philippines in 1995 and is claimed by both countries. Taiwan and Vietnam have also made similar claims.

Recently, photographs of Chinese island construction on Mischief Reef were posted online in China. They reveal close-up images of the land reclamation work, including the construction of barriers, dredging and workers.

The photos were removed by Chinese government censors two days after they were published on the Sina website. One shows a marker with Chinese characters that read: "Monument to aquacultural workers who died on China’s Nansha [Spratly] Islands, Meiji Jiao [Mischief Reef]."

Another shows a sign on a beach reading, "Let’s establish a firm foundation in the sea and win glory for the nation." 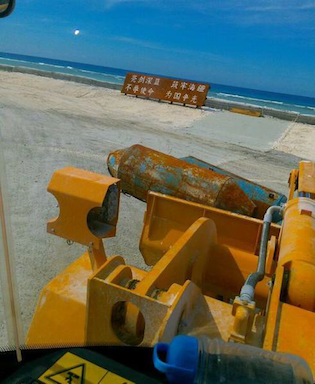 Harris, the Pacific Command leader, testified in September that the three airfields being built in the region are at least 10,000 feet in length. The most advanced is on Fiery Cross Reef.

"China is building three runways of 10,000-foot length which is only a thousand feet shorter than it would be required for them to land a space shuttle," Harris said. "So I think that gives me great concern militarily."

"And if you look at all the facilities then you can imagine a network of missile sites, runways for their fifth-generation fighters and surveillance sites and all of that," he said. "It creates a mechanism by which China would have de facto control over the South China Sea in any scenario short of war." 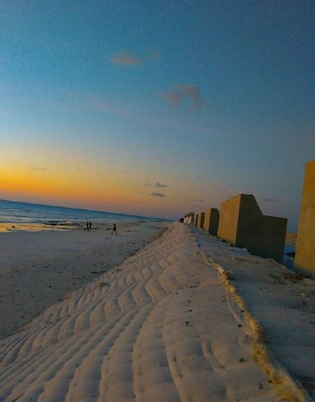 During war, the facilities would be "easy targets," Harris said. "But short of that, militarization of these features pose a threat … It poses a threat, rather, against all other countries in the region."

David Shear, assistant defense secretary for Asian and Pacific affairs, told the same Senate hearing that China has not yet deployed advanced weaponry on the islands. "And we are going to do everything we can to ensure that they don't," he said. "This is going to be a long-term effort. There are no silver bullets in this effort. But we're certainly complicating Chinese calculations already."

"Preventing the Chinese from further militarizing those features is going to take a range of options, including freedom of navigation operations, and we're in the process of considering those operations now."