President of the Council on Foreign Relations Richard Haass sharply criticized Obama's decision. "[President Obama] just had a first round of an election in Afghanistan, you're going to have a new Afghan government, why we would do this unilaterally and not work this out in a dialogue in consultation with a new popularly elected Afghan government is beyond me," Haass said. More importantly, the CFR president warned conducting foreign policy by calendar and setting arbitrary deadlines could have disastrous results. "I simply don't understand why we're approaching Afghanistan through a calendar rather than through local realities."

Former CIA and NSA Director Gen. Michael Hayden also lambasted President Obama for weakening America's leverage with the new Afghan government by announcing U.S. forces are leaving. Hayden also expressed dismay that Obama is failing to properly consider the Iraq withdrawal as a case study for what could happen in Afghanistan if the United States completely left. "Let me parse out what the president just said, before I leave office, I'm going to make Afghanistan look like Iraq. You know, going to zero in Iraq did not lead to a happy outcome. Now he's committed to doing the same thing in Afghanistan. I think it's fairly dangerous," he said.

Host Joe Scarborough asked Hayden if he thought a small residual force would have had any effect in Iraq given the scale of violence that has consumed the nation. Hayden said yes, for two reasons. Firstly, an American presence would have a "dampening" effect among the rivaling factions, signaling to each side the worst case scenario would not occur. Without that guarantee, each side has a greater predisposition to act violently, Hayden said. Moreover, the former NSA Director added a simple combat brigade and a few fighter squadrons could have served to disrupt supply lines from Iran into Syria.

Panlist Willie Geist questioned Haass on what an acceptable timeline is for leaving forces in Afghanistan. "How long then, if you had your dream scenario, would you leave troops there?"

"The answer is, as long as it made sense," Haass replied. "We've kept troops in Korea now for what, 60 years since the end of the war there and Americans are comfortable with that. We've kept troops in Europe for a long time and Japan. You make a decision and you basically say, how much will it cost me to keep these troops there, what are they accomplishing for it."

"If it turns out that 10,000 troops in Afghanistan, as Mike said, I agree, in Iraq would help dampen the internecine fighting, train up the local forces, carry out counterterrorism missions. Essentially make a place that still matters to us, more stable at an acceptable cost, why wouldn't we keep 10,000 troops there in an open-ended way? That to me is a smart way of making national security. What makes me so uncomfortable with this is we're setting these deadlines and signals all sorts of people, and we're saying what, ‘no matter what, we're now committed to this'? What happens if the president wakes up in two years and it turns out his military advisers all say ‘this is a good investment. Why would we pull the rug out from under it now?' I don't understand why he would create this pressure on himself," Haass concluded. 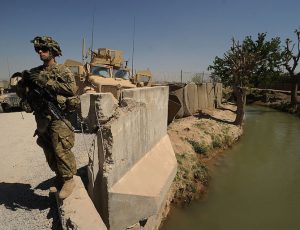