BEIJING—Defense Secretary Jim Mattis pressed Chinese President Xi Jinping on China's buildup of military bases on disputed islands in the South China Sea as Xi defiantly stated Beijing would not give up the newly reclaimed islands.

Randall Shriver, assistant defense secretary for Asian and Pacific Security Affairs and who took part in in the meeting between Mattis and Xi, said the Chinese leader asserted Beijing's control over the islands and also opposed growing U.S. support for Taiwan.

On the South China Sea, Mattis voiced American concerns about China's buildup of missiles—both anti-ship and air defense missiles—on disputed islands in the sea, which is international waters contrary to Chinese claims to sovereignty over most of the strategic waterway in Southeast Asia.

"We have a disagreement and I think the secretary was effective in saying these are long standing principles. These are widely shared. It's not for one country to unilaterally diminish what are international rights for freedom of navigation and how to define rights on international waters," Schriver told reporters after the meeting.

Xi, for his part, issued a statement through the official Xinhua news agency saying China will not give up an inch of territory in the sea.

"While seeing the existing common interests of China and the United States, we also do not shun the differences that exist between the two sides," Xi said.

"Regarding the issue of China's sovereignty and territorial integrity, our attitude is firm and clear. From the territory left by our ancestors, (we will not) give up even one inch."

At the start of the meeting Xi told Mattis good relations between the two countries will benefit peace and stability and called the U.S.-China relationship one of the most important bilateral relationships in the world. 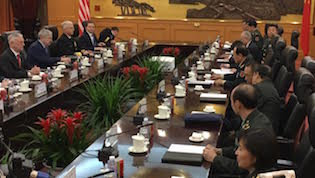 The theme of all the talks was that both nations are strong powers and that exchanges reduce the potential for conflict.

Mattis also raised the issue of Xi promising in 2015 not to militarize the South China Sea during his discussions with Wei, the defense minister.

"The secretary raised directly President Xi's previous comment to Obama about not militarizing, and again that was in the context of ‘You're behaving in ways that cause concerns not only to us but to regional partners. And that it seems to us you're taking actions that are contrary to the interests of the Chinese people. There's this reaction among the region,'" said a senior defense official who was in the talks.

However, both sides sought to avoid getting bogged down in "irritants" to relations and to keep the dialogue "at a more strategic level," the official said.

The Chinese leaders also voiced opposition to the Trump administration's new National Security Strategy and Mattis's National Defense Strategy, which identify China as a strategic competitor of the United States.

The Chinese claimed the documents unfairly characterized China, which insists its large-scale military buildup is purely defensive and that other behavior, such as the island militarization in the South China Sea, are within Beijing's rights.

Mattis defended the strategy, telling the Chinese that he knew the wording of the document on China posing a strategic challenge would be read carefully in both the United States and China.

"He chose the words carefully and wanted to give an accurate objective description of where the relationship stands, that it's characterized by strategic competition," the official said. "He views that as a way to demonstrate honesty, transparency, and be the starting point for a candid conversation."

The Chinese voiced opposition to the description but "from the secretary's point of view this is where we start the conversation—we start it on reality basis, not on wishful thinking."

Pentagon Press Secretary Dana White, who also took part in the talks, said overall the discussions were candid and positive. "Areas of disagreement were identified but not necessarily dwelled on," she said.

The topic of U.S.-China trade disputes were also raised by the Chinese. However, Mattis sought to keep the discussion on security and defense issues. 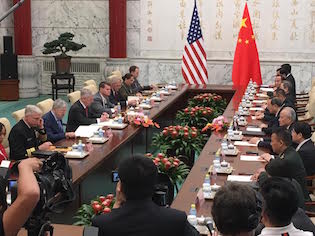 "Our goal is to have the military relationship as a stabilizing force despite what might be happening in other areas of the relationship," the official said, noting that both Wei and Yang raised the trade dispute while Xi alluded to the matter.

The official said Mattis "made very clear" the U.S. position that freedom of navigation in the South China Sea is something the United States will promote.

In response to Xi's blunt comments about not giving up territory, Mattis "was equally clear on how we see our interests and where we believe it's to the benefit of all maritime nations to have a rules based order under international law," the official said.

"I wouldn't describe it as a tit for tat but I would say both sides had an opportunity to articulate their interests," the official said.

Philippines is claiming the Spratly Islands where China recently has deployed missiles on military facilities in three of the islands.

Mattis told Chinese leaders that several nations in the region had voiced their concerns about Chinese hegemony over the sea.

Mattis "noted we hear a lot from regional parties about their concerns for Chinese behavior and how it's for the Chinese to decide what's in their own interest, but we see the potential for their behavior being counterproductive to the interest of the Chinese people themselves," the official said.

The visit by Mattis was the first by a U.S. secretary of defense since 2014 and comes as China has changed the power balance in the region through the militarization of the islands.

Chinese officials also voiced disappointment that the Pentagon disinvited the Chinese navy from taking part in the large-scale U.S.-led naval exercises known as Rim of the Paific, or RIMPAC. The exercises began this week. 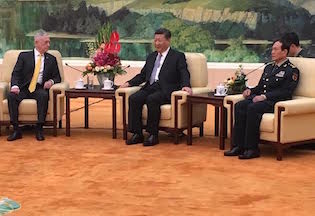 "They were particularly disappointed that we linked it to their behavior in the South China Sea," the official said. "And the secretary explained in very clear terms what the exercise is about and the belief that the Chinese behavior [in the South China Sea] is not consistent with those values and principles and we made the decision we made."

On Taiwan, the official said the Chinese, as expected, raised U.S. support for the island state that Beijing regards as a breakaway province, several times.

Mattis told them in response that the U.S. policy toward Taiwan is consistent with the decades-long American One-China policy.

The defense secretary will meet Thursday with Gen. Xu Qiliang, vice chairman of the Central Military Commission who is considered the second most powerful official in China after Xi.

Mattis then departs for South Korea and talks with South Korean defense leaders before traveling to Tokyo for defense talks there.