The Marine Corps could undergo an overhaul at all levels over the next decade to prepare for future conflicts in which information warfare will play a critical role, according to documents obtained by the Washington Free Beacon.

The documents outline two courses of action—one dubbed "evolutionary" and the other "revolutionary"—for the Marine Corps’ "Force 2025" strategy, both versions of which involve boosting what the authors call "information warfare capabilities" in the Corps’ ground, aviation, logistics, and command elements.

A roughly 300-person operational planning team developed the plans in response to a order from Gen. Robert Neller, the Marine commandant, in January.

"Maintaining the status quo is unacceptable. Failure to change the shape and form of the service will condemn it to irrelevance," the brief reads.

Senior Marine leaders are to be briefed on the proposed courses of action. Neller is expected to attend the brief, which will take place on Tuesday, April 12.

Maj. Anton Semelroth, the director of the Marine Corps public affairs office, confirmed that the service’s Force 2025 strategy will be discussed at a meeting this week during which senior leaders will give input on a number of possible courses of action. He emphasized that all options are "pre-decisional" and will undergo continued examination and updates before being presented to Neller for a decision later this year.

In the "evolutionary" course of action, infantry battalions stand to lose many heavy weapons and anti-tank assets, and light armored reconnaissance and tank battalions would see their assets reorganized.

In the "revolutionary" plan, the three Marine expeditionary forces would each gain a substantial information warfare group and an "engagement battalion."

The documents candidly admit that the service struggles to understand how to plan for "information warfare," and even how to define the term, noting that the definition included in the brief "needs refinement." They also cite a "lack of institutional understanding of information warfare" as a prime challenge.

"We approach IW [information warfare] as executing the warfighting functions in and through the information environment," one brief reads. "IW is not a ‘thing,’ it is a ‘thing of things.’"

Information warfare capabilities would be integrated across the service in the "revolutionary" course of action. The plan would create individual information warfare battalions and squadrons in the Corps’ ground, logistics, and aviation elements with the goal of enabling faster, better decisions "at lower levels on a distributed population-filled battlespace."

The briefs do not provide specific details on what tasks the Marines in these "information warfare organizations" would perform. Thomas Donnelly, a defense and national security expert at the American Enterprise Institute, told the Free Beacon that establishing particular units within the Marine Corps to focus on information warfare would run into the problem that "information warfare" is such a vast and nebulous category.

"It does not make a lot of sense to me," Donnelly said. One aspect of information warfare involves the "safety of the civilian or military internet," the power grid, and electronic communications, Donnelly explained. A second aspect is electronic warfare, or "confrontation through the electromagnetic spectrum."

Information warfare can also involve the use of propaganda to advance state interests, such as Russia’s use of Kremlin-run media outlets to rewrite the history of its intervention in Ukraine.

Both courses of action also propose changes aside from the addition of information warfare capabilities, including those that would give Marines increased autonomy in the use of weapons and technology.

The service would enhance the capabilities of small ground units by giving infantrymen at lower levels access to precision fires to quicken the "kill-chain" and "maximize lethality and survivability." Neller tasked Marine leaders with devolving precision fires capability to lower echelons, according to the brief.

Additionally, the "revolutionary" path would involve rethinking the organization of Marine reconnaissance units. Under the plan, these reconnaissance units would be filled by Marines qualified as special operations forces through their training with the Marine Corps Special Operations Command.

This would be a major shift away from today’s practice. Currently, special operations or "MARSOC" Marines and reconnaissance Marines are two distinct groups of personnel, with different training establishments and missions. Marines who enter the special operations community typically conduct operations under the armed forces’ Special Operations Command, or SOCOM, and do not remain under the Marine Corps’ operational control.

The reorganization would be modeled after the Air Force Special Operations Command Pararescuemen, according to the documents.

In January, Neller ordered the service to develop a "clear-eyed vision" of what it will look like in future decades to prepare to fight the next major conflict while maintaining global commitments.

"As we have remained engaged in the current fight and operationally committed, our enemies and potential adversaries have not stood idle," the Marine commandant wrote in the order. "During these years, they have developed new capabilities which now equal or exceed our own. Threats to our nation’s interests have evolved, and instability around the globe has steadily increased."

Neller specifically called for the service to modernize and take advantage of new technologies.

"[The future fight] will encompass not just the domains of land, air and sea, but also space and the cyber domain," Neller wrote. "It will include information operations and operations across the electromagnetic spectrum. It will involve rapidly changing and evolving technologies and concepts, which will force us to be more agile, flexible and adaptable."

Semelroth, the Marine Corps spokesman, confirmed that "structural change" is under consideration by the 240-year-old institution.

"Growing information operations, cyber, and electronic warfare capability at the Marine Force and Marine Expeditionary Force levels is one of the specific areas of interest that is under consideration," Semelroth said. "As we work through the Force 2025 construct, we are examining the various operational, organizational, and structural changes necessary to support a more robust information warfare capability."

Donnelly, the defense expert, noted that the Marine Corps has historically been "pretty good at modernization" because the service has retained its identity while incorporating new aircraft, weapons, and technology.

"They just decided to be more of what they were instead of reacting to external events," Donnelly said. "They haven’t changed to adapt to the world, they’ve just become slightly better … but, functionally, the same Marine Corps."

The United States has faced increasing threats in the cyber realm particularly from Russia and China, both of which have launched successful data attacks on U.S. government systems.

Gen. Philip Breedlove, commander of the U.S. European Command, said in 2014 that Russia was waging "the most amazing information warfare blitzkrieg we have ever seen in the history of information warfare" in its intervention in Ukraine.

"What we see in Russia now, in this hybrid approach to war, is to use all the tools they have … to stir up problems they can then begin to exploit through their military tool," Breedlove said during a NATO summit in Wales.

Donnelly named Russia, China, and Iran when asked about emerging threats to American interests and cited worries about a "system collapse" confronting the American-led global order.

"I think the threats to the American international order has risen to a very dangerous level," Donnelly said. "If the system fails in one place, then as a whole it will fail as a system." 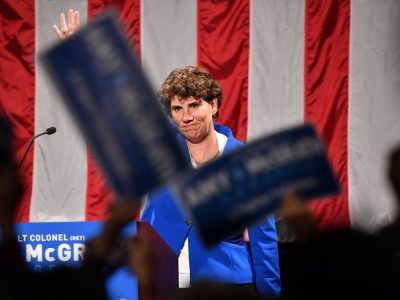