TOKYO—Japan is building up its military forces and strengthening alliances to counter threats from China as the country emerges from decades of isolationism following its defeat in World War II.

"It is extremely dangerous," Harada said in an interview of China’s attempts to enforce an air defense zone covering the islands located west of Okinawa.

Dubbing the Japan military buildup "integrated mobile defense," Harada said, "we have to respond to the situation seamlessly and very readily."

Chinese ships and aircraft have stepped up intrusions into airspace and waters around the islands since the air defense zone was set up in 2013 covering the islands. Japanese F-15 warplanes have made frequent intercepts of Chinese aircraft.

In addition to military brinksmanship with Japan over the islands, Harada said China is engaging in "information war," including the frequent use of state-run media to falsely portray Japan as reverting to World War II militarism.

The term "three warfares" was coined in a Pentagon study made public last year. The study identified China’s use of what it termed legal warfare, psychological warfare, and media warfare as surrogates for kinetic conflict against enemies, including in maritime disputes.

"We recognize that they are taking that type of policy," he said.

Harada rejected Chinese charges of a militarist revival in Japan as groundless. "That is just the part of the information war that they are conducting," he said.

"Since the end of World War II, Japan has been making efforts to be a peaceful country, and in accord with the Japanese constitution we have been taking an exclusively defensive posture, and never became a country that poses a threat to other countries," he said.

Japan also is continuing to remain a non-nuclear power and not develop a nuclear deterrent in the face of growing nuclear missile threats from North Korea and China, Harada said. 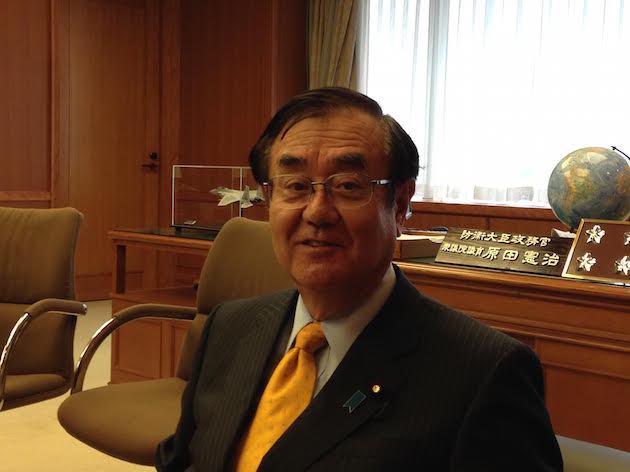 The Japanese military buildup is a centerpiece of the policies of Prime Minister Shinzo Abe, a conservative who was reelected to a second term in December based on growing fears here of Chinese military threats.

"Japan is a global power with a rich culture and tradition that upholds universal values as freedom, democracy, respect for fundamental human rights and rule of law," Abe stated in a forward to Japan’s national strategy. "Japan, as a maritime state … can only ensure its own peace and security by actively engaging in efforts to make the entire world a more peaceful and secure place."

Abe, who will meet President Obama in late April, is in the process of seeking to codify in law a new interpretation of the pacifist constitution announced in July that will mark a major shift in Japan’s post-war defense postures. The reinterpretation includes a concept of "collective self-defense" that allows Japan to join international military operations as part of joint regional defenses. In the past, the military was limited to responding solely to attacks on Japan.

Japan’s parliament last week debated the country’s defense budget, which will increase from $39.5 billion last year to $41 billion this year.

By contrast, China’s publicly announced budget this year for the military will be $142 billion and is believed to be much higher.

Japan’s military, known as the Japan Self-Defense Forces, is making modest force improvements. They include purchases of 46 U.S. F-35 jet fighters, the addition of two Aegis-equipped destroyers, the modernization and growth of the underwater force from 16 to 22 submarines, and the upgrade of missile defenses. The Japanese military also will field the long-range Global Hawk spy drones in the next two years.

Japan’s government also created a high-level policy unit called the National Security Secretariat made up of senior officials and a staff to better coordinate defense and security policies.

The government also is considering establishing a foreign intelligence service modeled after the CIA or Britain’s MI-6.

A recent change to civilian space rules for the first time will permit Japan to increase the number and use of satellites and space assets for defense.

Behind the scenes, Japan is working on new surface-to-surface and cruise missiles and shifting forces from northern bases to southern zones to be ready to respond to any Chinese provocations or attacks.

"I strongly believe that the enhancement of the U.S.-Japan alliance is the utmost critical point here," Harada said. "Even though the Defense Ministry does its utmost effort to protect our people, unless we have the cooperation and support from the United States we cannot maintain strong security."

Narushige Michishita, a national security expert at the National Graduate Institute for Policy Studies, a think tank, said the latest U.S.-Japan guidelines follow earlier revisions in 1978 that focused on the Soviet Union, and in 1997 that were directed against the North Korean threat. The 2015 guidelines are aimed at China, he said.

"The new guidelines won’t be explicit in using the ‘C-word’ but that that is what they are about," Michishita said.

"After the guidelines are formulated and the necessary bills are passed, the U.S. and Japan will embark on operational planning for dealing with China in the future," he said, adding that building up Japanese military capabilities is urgently needed to meet the challenge.

Japan is working with the United States to develop weapons and other capabilities that can counter China’s so-called "anti-access and area denial" arms—submarines, missiles, and aircraft aimed at controlling strategic waterways near China.

To deal with those weapons, "we have increased integrated operations capabilities, and also enhanced the far abroad operations," Harada said.

Chinese activities in the East China Sea and in the skies above it have included intrusions by state-owned boats and aerial incursions.

Chinese jets also have flown dangerously close to Japanese interceptor jets near the islands and "may cause some dangerous accident or unexpected situation," he said.

Harada also confirmed that the Chinese are building up military facilities on Nanji Island along the Chinese coast around 186 miles from the Senkakus.

Japanese forces are conducting "continuous surveillance" of the Chinese military activities, he added.

To challenge Chinese ship intrusions, both state-owned Chinese maritime vessels and fishing boats, the Japanese government decided to use coast guard ships instead of naval vessels against the sea intrusions, to avoid escalating the situation.

One Japanese analyst described the strategy of countering Chinese intrusions as "don’t be the first to pull a knife—like we mistakenly did at Pearl Harbor."

Japanese F-15 jets based at the southern air base at Naha have been launched on nearly daily intercept missions against Chinese air incursions.

Japanese and Chinese officials will meet March 19 for talks on setting up a "liaison mechanism" to deal with air and naval disputes in the region.

Harada said because of Chinese actions "it is of utmost importance to implement the maritime and air liaison mechanisms at the earliest stage."

Harada, speaking the day before the four-year anniversary of the 2011 earthquake and tsunami that killed approximately 20,000 people in northern Japan, said the U.S. Navy’s dispatch of the aircraft carrier strike group led by the USS Ronald Reagan during that crisis was a welcome display of U.S. military.

"It shows that the U.S. government is really committed to protecting Japan," he said.