The Islamic State terror group is making significant gains in Libya as hundreds of its members have been detected moving there from Syria and Iraq in recent weeks amid stepped up bombing and tighter border controls.

U.S. intelligence agencies have identified at least 500 ISIS fighters over the past two months moving into the war-torn North African state that became an al Qaeda safe haven following the ouster of Libyan dictator Muammar Gadhafi in 2011, according to American defense officials.

Since then, Libya has become a chaotic, largely ungoverned territory as large numbers of jihadists and militias operate in the country amid competing government factions.

Additionally, ISIS leaders have notified recruiters to urge foreign fighters wishing to join the group to consider traveling to Libya, as border controls in Turkey have tightened, making it more difficult to reach the group’s stronghold in Syria, said officials who spoke on condition of anonymity.

ISIS emerged in Libya in 2015, first in the eastern city of Darnah where it was ousted in July. Currently, its main stronghold is the costal city of Sirte, where its official radio, Al Bayan, began broadcasting in June.

The group also has claimed control of the costal town Bin Jawad, east of Sirte, and the group boasts of having strong presence in nearby Al Nawfaliyah, Al Sidra, and Ras Lanuf, key oil producing areas. 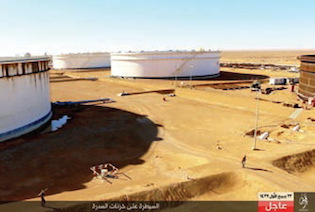 ISIS also has operatives in Benghazi and has set up cells in Tripoli.

The group has divided Libya into three sub regions it calls Barqah, the eastern coastal region also known as Cyrenaica; Tripoli, which refers to the former Italian colony formed from current region of northwestern Libya; and Fezzan, the name for southwestern region of Libya.

The United Nations estimated in a report in December that ISIS has between 2,000 and 3,000 fighters in Libya, with the most in Sirte, and has been recruiting fighters from sub-Saharan states.

A think tank, the Libyan Center for Terrorism Studies, however, estimated recently that the number of Islamic State fighters in Libya is increasing and provides a current estimate of some 10,000 fighters.

Most of the ISIS terrorists come from neighboring Tunisia, along with Mali, Sudan, and Egypt, the report says. The terrorist group also has clashed with other jihadist terror groups, including the al Qaeda-aligned Ansar al Sharia.

In recent weeks, at least two jihadist groups announced they are aligning with ISIS: The Ajdabiya Revolutionaries Shura Council, in Ajdabiya, and a second terror group in Misrata.

A U.S. intelligence official confirmed the group is expanding in Libya, but said it was not necessarily the result of the stepped up counterterrorism operations in Syria and Iraq.

"They first moved into Libya at the height of their so-called ‘caliphate,’" the official said. "ISIL operatives are in Libya because terrorists have access to ungoverned space, weapons, new potential revenue streams, and fighters willing to rally around the ISIL brand." ISIL is an acronym used by the U.S. government for the Islamic State, which is also commonly referred to as ISIS or IS.

Losses by the group in Iraq and Syria don’t "reflect the group’s long-held and continuing expansionist agenda," the official said.

The CIA has stepped up monitoring the flow of terrorists into Libya, according the Libyan news website Akhbar 24. The outlet reported Dec. 4, quoting Tunisian security sources, that the agency is working with Tunisian security to monitor ISIS activities in Libya, including the location of training camps and the influx of ISIS terrorists.

Sebastian Gorka, a counterterrorism expert, agreed that increased ISIS activity in Libya may not be directly linked to increased air strikes and tighter border controls in the Middle East.

"The truth is, IS has a clear strategy to expand its influence and control beyond Iraq and Syria," said Gorka, the Horner chair of military theory at Marine Corps University.

"It already has official affiliates in Asia and even west Africa," he added. "Now that the new caliphate approaches its second anniversary, it is essential for [ISIS leader] Abu Bakr al Baghdadi to demonstrate that his empire can expand into new territories."

Gorka said current ISIS strongholds in Syria and Iraq are a "giant forward operating base" used for launching new attacks in other areas, in North Africa, the Middle East, Europe, or the United States.

"That's like a chess player only focusing on what goes on in one or two squares rather than the whole board," Rubin said. "The simple fact is that we need a strategy to counter the Islamic State not only in Iraq and Syria but also in Libya, the Sinai, Afghanistan, Nigeria, and an ever growing list of countries."

Rubin said "ego and myopia" in the White House are to blame for the failure to counter ISIS. "Simply declaring the Islamic State is neither Islamic nor a state until we're blue in the face is not a strategy," he said.

The Libyan news outlet Al Wasat reported that unidentified aircraft bombed an ISIS convoy near Al Zahir, around 12 miles west of the main ISIS stronghold in Sirte. An ISIS-occupied military base in the region also was bombed in Monday’s airstrikes.

ISIS also sought to take over Libya’s Al Sidra oil fields and port near the city of Ras Lanuf on Jan. 4 in a surprise military offensive. The group has used black market sales of oil as a main source of revenue.

The attack began with a suicide car bomb at the entrance but was later repelled by guards and Libyan national military forces. ISIS fighters were able to set five oil tanks on fire at the facility.

European governments are said to be increasingly concerned about the group’s growth in Libya.

In Italy, the chairman of the Senate’s foreign affairs committee, Ferdinando Casini, called for military intervention to prevent ISIS from taking power in Tripoli.

A new UN-backed Libyan central government has been designated and its prime minister-designate, Fayez Sarraj, was the target of a suspected ISIS car bombing last week near the airport in Misrata. The blast killed 20 people and wounded more than 100.

Casini said the bombing attack against Sirraj and other new government leaders was aimed at preventing the new unity government from taking power.

"The more the birth of a government is delayed, the more threats will multiply. Their number will be reduced only when the government takes office. From now until that point, we are in no man's land. Nerves of steel are required."

Germany’s military is considering a training mission for the Libyan army, according to the German newspaper Der Spiegel.

Up to 200 troops of the Bundeswehr, as the German military is called, could be sent to Tunisia within the next few months to train Libyan soldiers and counter the spread of ISIS fighters.

The German military is currently training Kurdish fighters in Northern Iraq and the Libyan mission would be similar.

Egypt also is concerned about new threats posed by the expansion of the Islamic State in Libya and warned recently that the danger is increasing, according to the Cairo newspaper Al Akhbar.

"ISIL is reinforcing its positions in Libya," the newspaper stated in a Jan. 8 commentary. "Al Qaeda still has its factions there. The danger is growing for the countries of the region, and Europe will not tolerate this situation much longer because the danger is concentrated on the other side of the Mediterranean."

"The situation is becoming more dangerous now," the newspaper warned in a Jan. 8 commentary. "ISIL fighters have reinforced their presence in the port of Sirte, and they are now mounting a serious attack to control the so-called oil crescent, in the ports of Sidra and Ras Lanuf where most of Libya's oil production is based."

Libya’s Al Wasat newspaper reported Dec. 29 that IS terrorists have set up a training camp at a farm in Hirawa, east of Sirte, where around 150 children of mostly from Sudan and Nigeria are being trained in archery, shooting, suicide operations, and booby-traps.