"I openly state that the recent riots & unrest in Iran were schemes designed by the U.S.; the usurping, fake Zionist regime; their mercenaries;  & some treasonous Iranians abroad who helped them," Khamanei wrote on his official Twitter account, which routinely disseminates anti-Semitic conspiracy theories.

Protests have swept across Iran since the regime’s morality police murdered a 22-year-old woman for not properly wearing her head covering, which is required by law under the theocratic regime. Since her death, Iranians across the country have been protesting Khamenei’s government and threatening to topple it.

"The young girl’s death was a tragic incident that saddened us too," the supreme leader wrote. "But the right reaction to it wasn’t for some to create insecurity for [people], burn the Quran, Mosques, banks, and [people’s] cars, & to pull off women’s scarves. These weren’t normal acts. They were planned." 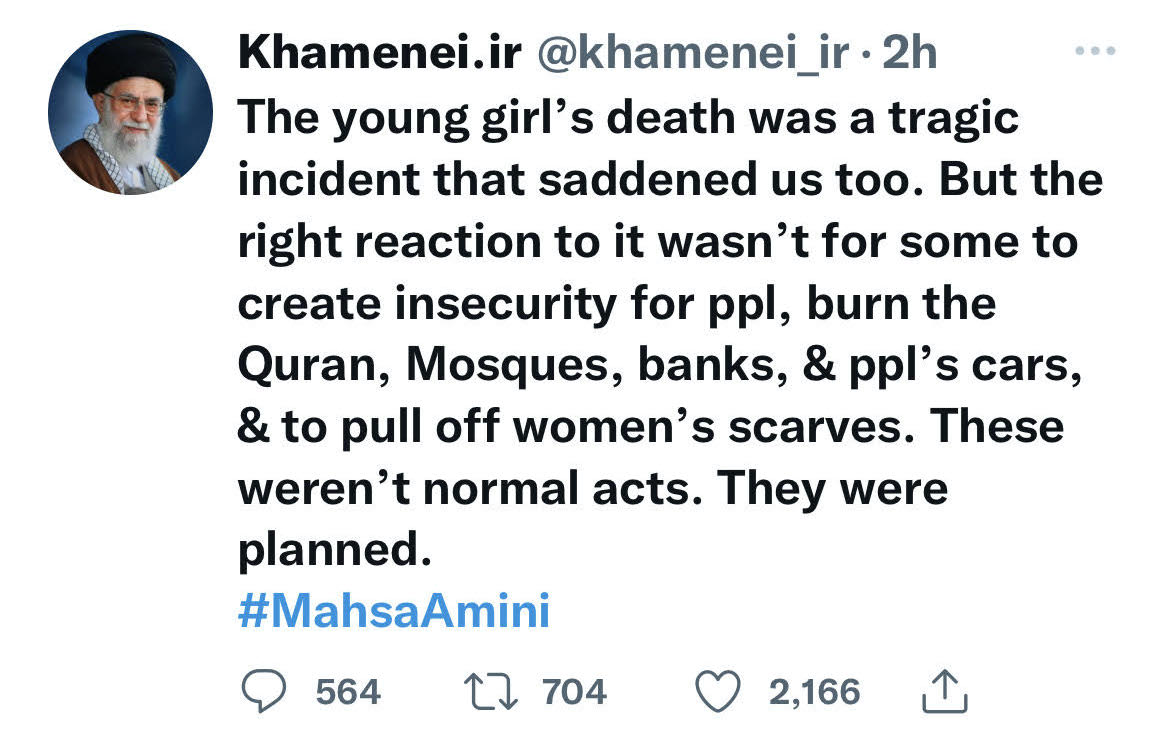 U.S. and Israeli intelligence services planned and directed the protests, according to Khamenei.

"Some individuals are against stating that certain events were designed & carried out by the enemy. They stand up to defend U.S. & Zionist intelligence services, & they use fallacious analysis & rhetoric to deny it was the word of the enemy," he wrote. 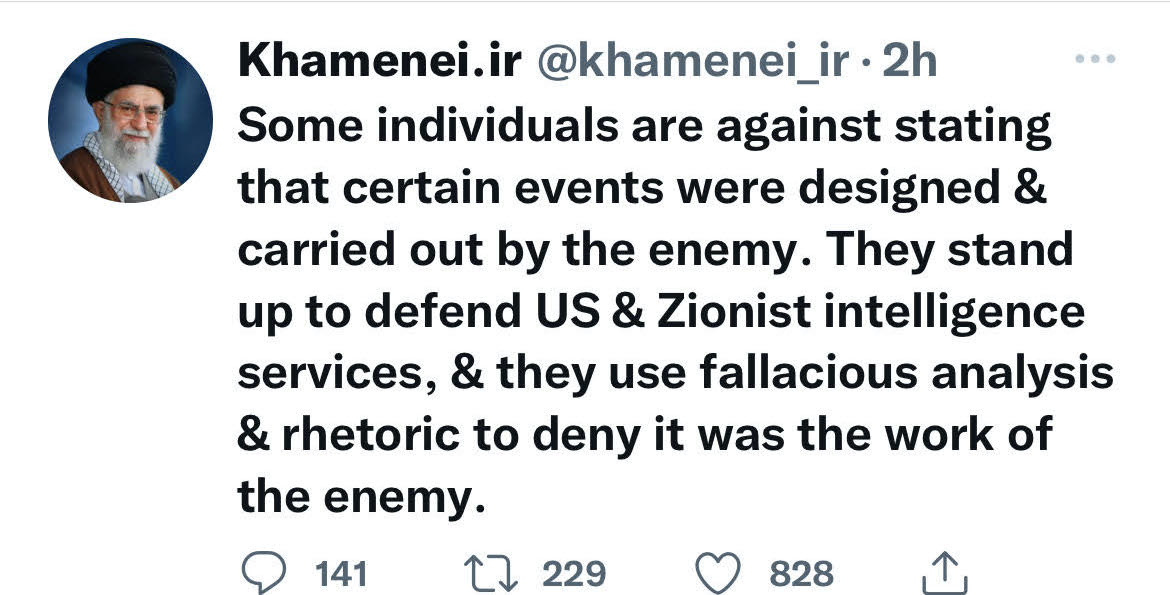 The protests are not even about head coverings, Khamanei wrote, claiming that his country does not actually persecute women who do not wear a hijab. All factual evidence, however, contradicts this claim.

"This is not about Hijab in Iran," he wrote. "Many Iranian women who don’t observe the Hijab perfectly are among the steadfast supporters of the Islamic Republic. It is about Islamic Iran’s independence & resistance. The U.S. cannot tolerate a strong, independent Iran." 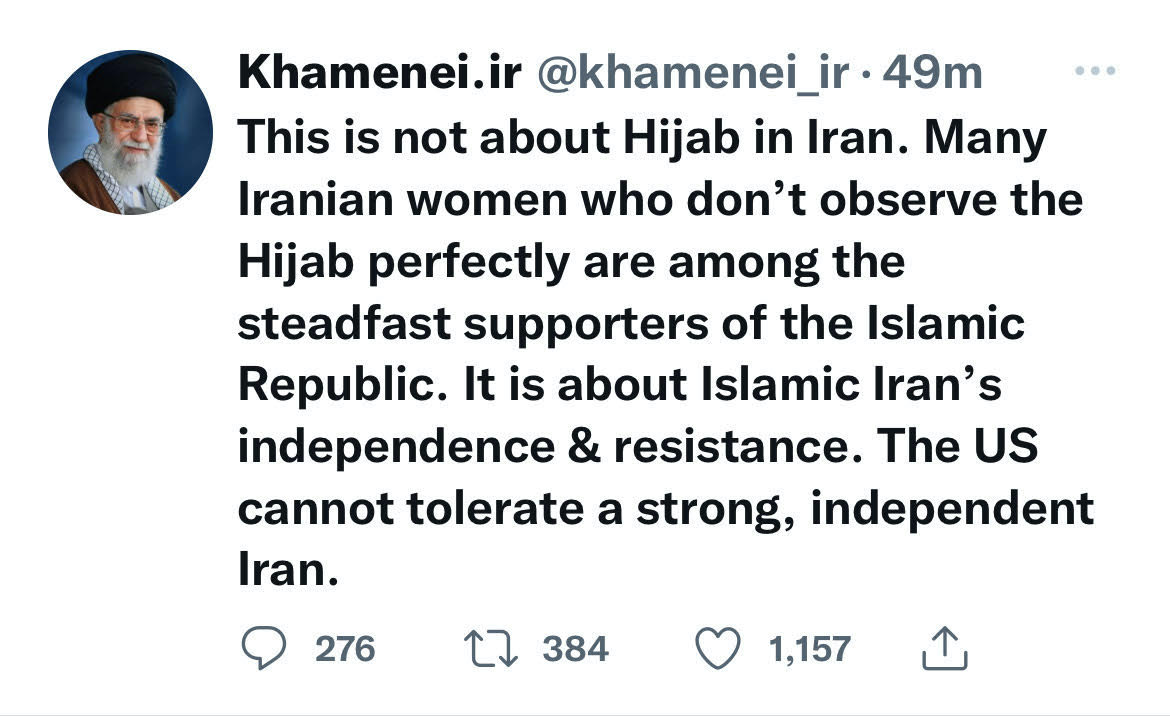 Khamenei also used his platform to criticize the U.S. government for not supporting protest movements that erupt in Europe.

"Many riots take place around the world. Especially in France, massive riots occur every now and then, but has the U.S. president ever supported European rioters, issued a declaration or said we stand with you? Is there any record of U.S. media supporting them?" he asked. 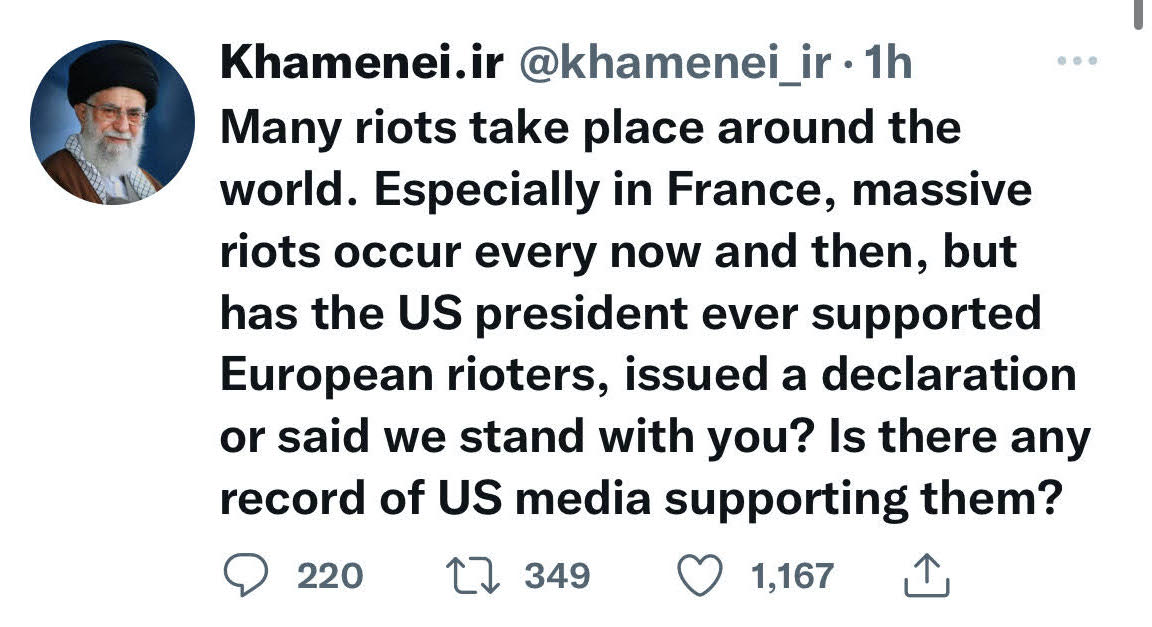 Khamenei’s government has met the country’s protesters with violence and arrests.