CBP still on track to exceed one million apprehensions in 2019

That number is a substantial decline from May, when CBP reported apprehending over 144,000, predominantly families and unaccompanied children. According to DHS, "[t]he reduction in apprehensions accounts for decreases across all demographics, including unaccompanied minors, family units and single adults, as well as decreases in migrants from all Northern Triangle countries, particularly those coming from Guatemala."

DHS did not release official figures on the exact number of unaccompanied children and family units apprehended in June. When reached for comment, a representative of CBP only told the Washington Free Beacon that "CBP has not released/posted the latest numbers" on either type of apprehension.

While down from May’s high, the June total is more than 50 percent higher than the number of apprehensions in June 2016, the second highest recent total. Briefing media Wednesday, a senior CBP official said that while numbers of apprehended children and family had declined, they were still elevated, with roughly 57,000 family units and 7,000 apprehensions. The official said 40 to 60 percent of front-line agents were still deployed combatting the border crisis, primarily in the El Paso and Yuma border sectors. 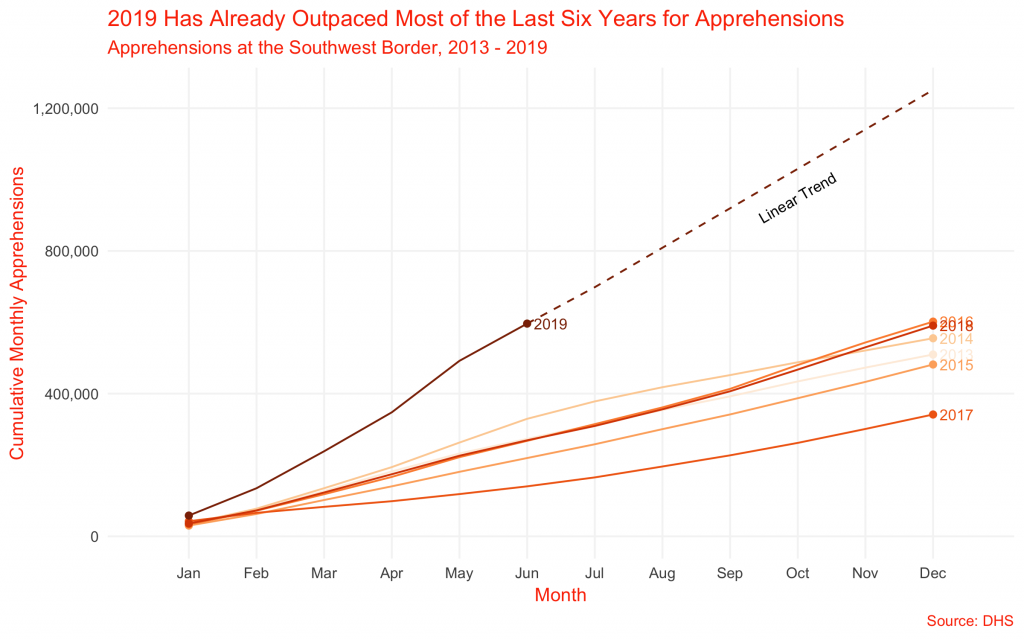 Cumulative apprehensions for 2019 are rising unabated, with apprehensions almost certain to exceed one million if current trends continue. Such an annual apprehension figure would put 2019 on par with historical highs in the late 1990s and early 2000s. That would mean the immigration detention system continues to be stretched well beyond its capacity.

"We are past the breaking point and in a full-blown emergency," DHS said in its release. "This situation should not be acceptable to any of us."

But why, then, did apprehensions decline in June? One simple explanation is the time of year: As the summer heat grows, the challenges of the trek north grow, and illegal immigration consistently declines. In five out of the past six years, apprehensions have fallen between May and June, with the exception being the slight increase over the historic lows in April and May of 2017. 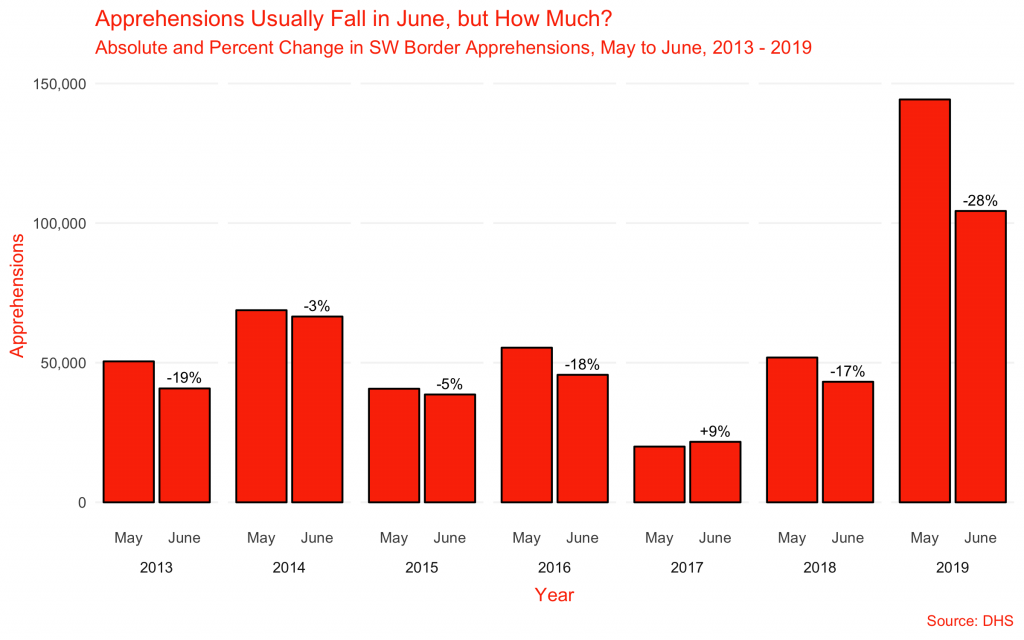 However June's decrease is, in both absolute and percentage terms, substantially larger than recent years. This greater-than-average decline may represent some regulatory changes instigated by the Trump administration, although such a connection is likely minimal given the timing of implementation. DHS has called repeatedly on Congress to implement legal changes to the asylum and immigration system, but congressional Democrats have dragged their feet on even providing additional funding to offset the current crisis.

Likely more impactful are the efforts of Mexico to crack down on its own illegal immigration problem. Following pressure from President Donald Trump, Mexican security forces have been deployed to try to shore up the infamously porous 700-mile southern border. In its release, DHS noted that "since the administration reached a new agreement with Mexico, we've seen a substantial increase in the number of interdictions on the Mexican southern border."

DHS also attributed the decline to the implementation of the Migrant Protection Protocols, which returns apprehended illegal immigrants to Mexico pending the resolution of asylum and other immigration hearings.

Still, in the department's view, a true fix to the border crisis will not come until Congress closes loopholes in asylum law that makes it easier for Central American migrants, especially those with minors, to claim asylum and avoid detention.

DHS concluded: "[I]n order for us to solve this crisis and to create lasting change at the border, we must address the vulnerabilities in our legal framework."

How China’s TikTok Rakes in Cash for Cartels