The lead Republican on the House Foreign Affairs Committee introduced legislation late Tuesday that would empower Congress to review, "and if necessary block, any effort by the Biden administration to terminate U.S. sanctions against the Iranian regime," according to a copy of that legislation.

Rep. Michael McCaul (R., Texas) is spearheading a House version of the legislation first introduced in the Senate by Sen. Bill Hagerty (R., Tenn.) and first reported by the Washington Free Beacon late last month. The bill is part of a larger effort by Republicans in both chambers to exert some degree of control over the Biden administration's efforts to reengage with Iran in pursuit of a revamped nuclear accord.

While both bills have little chance of passing in the Democratic-controlled Congress, they represent a growing GOP consensus about the danger of reengaging Iran and providing it with potentially billions of dollars in economic sanctions relief. Already, the Biden administration has signaled that it is willing to offer Iran concessions in the lead up to direct negotiations. This includes a reported effort by the administration to facilitate a $1 billion payment to Iran by South Korea as part of a ransom related to Tehran's seizure of an oil tanker belonging to that country.

Republican foreign policy leaders have also criticized the administration for withholding briefings on its diplomacy with Iran. U.S.-Iran envoy Robert Malley has yet to appear before Congress to address the Iran issue but has already begun negotiations with countries central to the U.S. effort to rejoin the deal, including China. GOP leaders remain concerned the administration will employ the same tactics as team Obama when it originally formed the nuclear deal, which included not consulting Congress in any substantial way.

"The Biden administration has already started making concessions in an apparent attempt to start negotiations with Iran," McCaul said in announcing the bill. "We have a responsibility to ensure that the American people are getting a better deal" than the original nuclear accord inked by the Obama administration.

Hagerty praised McCaul for taking up his legislation in the House and said that Iran's current behavior, which includes ongoing missile strikes on U.S. positions in the Middle East, does not warrant any level of sanctions relief. Like other GOP lawmakers, Hagerty sees the Biden administration as making concessions to Iran before the country even shows a willingness to come back to the bargaining table.

"House Foreign Affairs Committee ranking member McCaul and other members are making clear that both chambers of Congress oppose the Biden administration returning to the failed strategy of surrendering leverage that threatened the security of the United States and our allies in the region during the Obama years," Hagerty told the Washington Free Beacon. "These sanctions have taken time to implement and are now achieving their intended effect. This is not the time to back off or capitulate."

Meanwhile, Iranian leaders said on Wednesday that they will not accept a step-by-step return to the 2015 agreement that former president Donald Trump abandoned in 2018. Iran is demanding full-blown sanctions relief before it even begins to negotiate on a new deal. 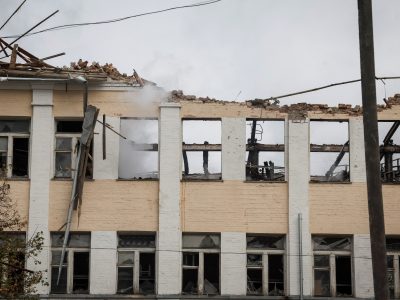 A Twitter Employee Exodus Could Be Just Around the Corner