The Chinese embassy in France on Sunday tweeted, and then quickly deleted, an anti-Semitic image portraying the United States and Israel as the grim reaper knocking on Hong Kong's door.

The image, which has been circulating online among anti-Semites for some time, depicts the United States as the grim reaper holding a scythe with Israel's flag. Countries such as Syria, Venezuela, Libya, and Iraq are portrayed as places where America and Israel have caused death and destruction. The picture reads, "Who's next?" in French, with the grim reaper approaching a door with Hong Kong written on it. 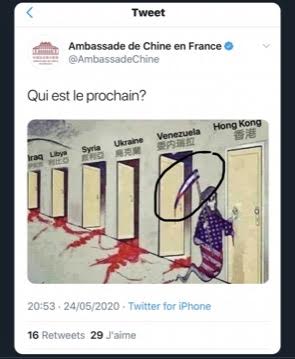 China has been ramping up its anti-U.S. rhetoric as it cracks down on democratic protesters in Hong Kong. A new national security law forwarded by Beijing would significantly expand the country's spy apparatus and specifically target protesters who have taken to the streets.

China's embassy in France released a statement on its website claiming its Twitter feed was hacked. The country said it is a victim of "fake news." The statement did not identify anyone or group the country suspects of posting the tweet.

The distribution of anti-Semitic images, like those posted by China's embassy, runs afoul of French laws.

"The Chinese Embassy in France has found that yesterday, someone used the Embassy's official Twitter account to post a picture captioned ‘Qui est le prochain?' [who is next?]," read the Chinese-language statement.

"We hereby solemnly declare: That picture violates French law and we strongly condemn such activity that damages the reputation of the Chinese embassy," according to the Chinese embassy. "Our embassy's duty is to comprehensively, accurately, and objectively introduce China and promote friendship between the China and France."

Emily Bruyere, a senior fellow at the Foundation for Defense of Democracies, told the Washington Free Beacon that China's anti-Semitic rhetoric has become increasingly frequent.

"The fake news story, that the tweet was an accident, obscures the real, non-accidental sentiment that it conveyed — a militancy quickly deleted in cases like this; widespread in discourse in China," Bruyere said. "The wolf warrior conversation begins to get at this. One beat farther, it’s not unusual for Chinese sources to talk about the US-China contest as a zero-sum battle. So while this may have been an accident, we should also be awake to an increasingly aggressive rhetoric in China and the sentiment it reflects."

An email to the Chinese embassy seeking further comment was not immediately returned.