The canister ejection test of a DF-41 missile from a rail-mobile launcher was detected on Dec. 5 in western China, said defense officials familiar with reports of the test.

Few details were available on the DF-41 launcher ejection test. 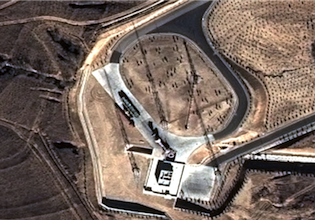 However, Chinese rail-based missile development has been carried out in the past at the Wuzhai missile test center, also known as the Taiyuan satellite launch center since 1982, according to declassified CIA documents. The launch site is located in China’s central Shanxi Province.

The test this month marks a significant milestone for Chinese strategic weapons developers and demonstrates that Beijing is moving ahead with building and deploying the DF-41 on difficult-to-locate rail cars, in addition to previously-known road-mobile launchers, the officials said.

Pentagon spokesman Cmdr. Bill Urban declined to comment. "We do not comment on PRC weapons tests, but we do monitor Chinese military modernization carefully," he said. 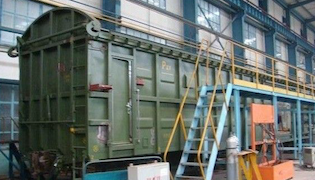 Previous disclosures from China on the DF-41, including Internet photographs, all showed the heavy missile deployed on a wheeled transporter erector launcher that is moved on roads.

The DF-41, with a range of more than 7,500 miles, is China’s most potent ICBM and was flight tested a day before the rail car ejection test with two multiple-independently targetable reentry vehicles (MIRVs), officials said.

Military analysts say the mobile basing of missiles is designed to complicate preemptive attacks on nuclear forces, such as those envisioned under the Pentagon’s Prompt Global Strike program, which will use precision-guided conventional weapons capable of striking targets at any location on earth within minutes of their discovery.

U.S. intelligence agencies estimate the DF-41 when deployed will carry up to 10 MIRVs—vastly increasing Beijing’s current warhead stockpile, which is based on single-warhead missiles, and currently estimated to include around 300 warheads. 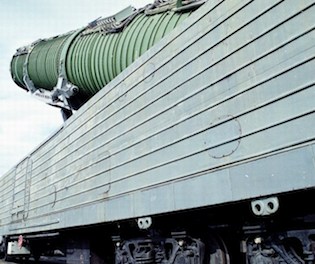 Details of the Chinese rail-based missile system were first reported by the Washington Free Beacon in 2013.

China is believed to have obtained rail-mobile missile technology from Ukraine, which during the Soviet period built the SS-24 rail-based ICBM, according to a report by Georgetown University’s Asian Arms Control Project.

The Georgetown report said the Chinese rail-mobile ICBM system is modeled on the Ukrainian-designed SS-24, and is known as a "land nuclear submarine"—an indication the rail launcher uses an ejection tube to boost the missile from the train car shortly before ignition of its engine.

China also is developing an extensive rail and tunnel system devoted to the missile train in central China, according to the report.

Phillip A. Karber, a defense expert who heads the Potomac Foundation, said his organization recently identified a DF-41 at a special launch site at Taiyuan. The missile was revealed in commercial satellite photos. 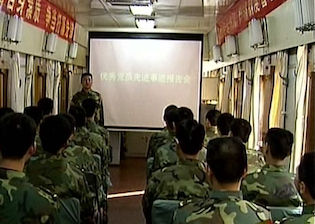 "If that missile train hosts the DF-41 ICBM it means it will also have a MIRV potential," Karber said. "The combination of high-speed mobility, launch cars disguised as civilian passenger trains, tunnel protection and secure reloading of missiles, coupled with multiple warheads, makes the system extremely hard to regulate or verify the number of systems."

Karber, who also is affiliated with the Georgetown arms control project, said the project first identified the rail-based ICBM system four years ago. However, the arms control community dismissed reports about the basing mode, he said.

"Since then there have been reports that China's 2nd Artillery Corps, the force that operates the missiles, had built 2,000 kilometers [1,243 miles] of heavy gauge rail for this system," Karber said.

The dedicated missile rail and tunnel system will significantly expand China’s ability to target ICBMs in the United States by avoiding missile overflight of Alaska, where U.S. anti-missile interceptors are based.

"We have also seen imagery of huge tunnel complexes capable of hosting three missile trains side by side," Karber said.

China’s first public disclosure of the DF-41 occurred in August 2014 when details about the missile program were published on a regional Chinese government web site.

After the disclosure, Chinese military spokesman Geng Yansheng told state media that "research and development [of missiles] is normal for the military without any specific enemy in mind."

"Because of the missile’s mobility, it is extremely difficult to be tracked by satellite," Geng said.

A congressional China commission stated in its annual report published earlier this year that China is deploying multiple-warhead missiles to increase China’s "ability to penetrate adversary missile defenses and enhancing the credibility of its nuclear forces as a deterrent."

The Pentagon is also studying a road- and rail-mobile ICBM system for future nuclear forces, according to Air Force contracting documents.

Rick Fisher, an expert on Chinese military programs, said China has been interested in rail basing for missiles for some time.

"The Soviet SS-24 used a rail car launcher, could carry up to 10 warheads and had a range of 10,000 kilometers," Fisher said. "This is close to the capabilities of the China Aerospace Science and Technology Corporation DF-41 ICBM."

China also has decades of experience in perfecting rail cars for transport of easily damaged large missiles and payloads.

"Like the versions developed for the Soviets, the Chinese system likely uses a cold-launch tube fitted to a covered rail car," Fisher said.

The recent rail ejection test likely is for "verifying the ability of the tube to eject the heavy DF-41 ICBM," he added.

After ejection from the tube, the DF-41 engine ignites microseconds after the missile clears the end of the canister.

Cold launch tubes are preferred for missile systems because the materials cost less and require less strength than missiles launched "hot" from within a tube.

"This vastly increases the challenge of tracking China's ICBM force, as China today has 74,565 miles of rail lines, including 9,942 miles of high speed rail," Fisher said, adding that by 2050 China could have up to 170,000 miles of rail lines.

High-speed rail lines would allow the DF-41 to reach deployment location rapidly and would complicate efforts to monitor, track, and counter the missiles.

Road-mobile and rail-mobile DF-41s will double China’s warheads in China’s arsenal and give China the capability of targeting the United States with nuclear strikes from most locations in China, Fisher said.

The Chinese nuclear buildup should prompt the United States to re-evaluate its arms control constraints on its nuclear forces, Fisher said.

"Given the growing degree of military technical cooperation and military-political coordination between Beijing and Moscow, we have to consider that eventually Russia and China could combine their nuclear weapons in a ‘tilt’ to coerce the United States, lets say in a military crisis over the future of democratic Taiwan," he said.

Meanwhile, Russia also disclosed recently that it is developing a new rail basing system for ICBMs.

Col. Gen. Sergei Karakayev, commander of the Strategic Rocket Forces, Russian’s nuclear missile and bomber forces, said a report on the rail basing would be presented to the Kremlin in 2017.

"Now the initial design is ready and we are preparing working design documentation for aggregates and systems within the weapon," Karakayev said, according to state-run Interfax on Dec. 17.

The new system will be based on the SS-24 that was dismantled after the fall of the Soviet Union in 1991.

Russia is seeking rail basing for missiles in response to the U.S. Prompt Global Strike system, according to Russian press reports.