China’s plan for a new military buildup on a disputed island near the Philippines shows the future deployment of Chinese warships close to where U.S. naval forces will be stationed in the future.

Details of the militarization plan for Scarborough Shoal in the Spratly Islands were obtained by U.S. intelligence agencies over the last several months, according to defense officials.

The plans were confirmed last month when a website for Chinese military enthusiasts posted a detailed dredging plan for Scarborough Shoal, including a runway, power systems, residences, and harbor capable of supporting Chinese navy warships.

The shoal is located about 150 miles from the Philippines’ coast. It is claimed by Manila but has been under Beijing’s control since 2012.

Disclosure of the buildup plan for the shoal is the latest element of a dispute that has pitted the United States and regional states against China.

China is engaged in what U.S. government officials have said is a gradual attempt to take over the entire South China Sea. The Pentagon has said the takeover threatens $5.3 trillion annually in international trade that passes through what are legally international waters but that China asserts are its sovereign territory.

Earlier Chinese militarization was detected last month on Woody Island in the Paracels, located in the northern part of the sea, when Chinese air defense and anti-ship missiles were spotted.

The plan to develop and militarize Scarborough Shoal, however, has set off alarm bells in both the Pentagon and State Department because of the area’s proximity to the Philippines, a U.S. treaty ally that recently agreed to enhance defense cooperation in the face of Chinese aggression.

Secretary of State John Kerry in February raised the issue of Chinese activities on Scarborough Shoal during a meeting with Chinese Foreign Minister Wang Yi in Washington. According to a source familiar with the meeting, Wang told Kerry that Chinese expansion of Scarborough Shoal would take place.

In public remarks after the meeting Kerry urged China not to take unilateral actions in the sea.

Last month, Chief of Naval Operations Adm. John Richardson voiced concerns about expanded Chinese activities on Scarborough Shoal. "I think we see some surface ship activity and those sorts of things, survey type of activity, going on," Richardson told Reuters. "That’s an area of concern … a next possible area of reclamation."

President Obama also raised China’s aggressive South China Sea activities during a meeting last week with Chinese leader Xi Jinping. A White House spokesman would not say if Scarborough Shoal was discussed. A statement on the meeting said only that Obama urged Xi to address regional differences peacefully and that the United States would uphold freedom of navigation and overflight.

Defense officials said the disclosure of the development plan that appeared on a Chinese military enthusiast website in March are bolstering worries.

China is calling the construction project for Scarborough Shoal its plan for Huangyan—"Yellow Rock"—Island, where a settlement will be set up.

The shoal is located about 168 miles from Subic Bay in the Philippines, where U.S. warships will be regularly deployed in the future as part of the enhanced defense agreement recently concluded between Washington and Manila.

The website included satellite photographs purportedly based on a construction bid proposed by the "Huangyan Island Township," a municipality created under what China claims is its regional authority on Sansha Island, located near China’s Hainan Island.

A graphic with one photo outlined the development plan, with three Chinese guided-missile frigates at a wharf at the southern opening of the shoal. 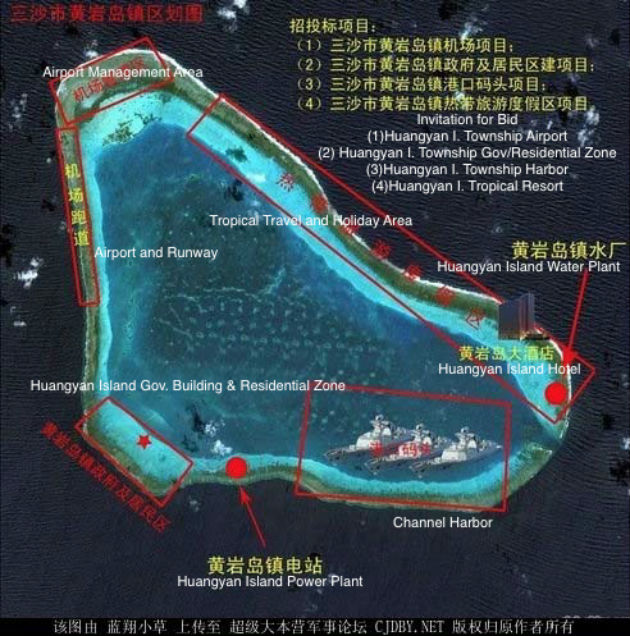 Other features include an airport and runway at the northern end, an electrical plan, a water treatment plant, a residential building, a hotel, and a "travel holiday" area.

The post appeared on the website Super Camp Military Forum March 9. Chinese authorities have used such websites to disclose new military developments in the past.

Defense officials said it is not clear whether the post reflects the actual plan of development or an earlier, conceptual stage.

One official, however, said there is specific intelligence indicating China has clear plans to build an island out of the shoal and place military forces on it.

The graphic is labeled "invitation to bid" and is based on a press release published online Dec. 15 by Tianjin Dredging Co., a subsidiary of the China Communications Construction Company.

The press release stated that Tianjin Dredging has commissioned another company, Zhenghua Heavy Industry, to build a dredging vessel. The electric-powered ship will be capable of digging up sand at a depth of up to 115 feet—an indication China plans a harbor deep enough to accommodate larger warships once the shoal is fully developed. The dredging ship will be delivered by July 2017.

"China's strategy in the South China Sea is clear, and has been for some time," Forbes told the Washington Free Beacon. "They intend to use coercion and force to reshape the region in accordance with their preferences, regardless of international law or norms."

Forbes called for an American declaration that the defense treaty between the United States and the Philippines extends to cover personnel, ships, and aircraft in the area.

"This could include further reclamation and militarization at strategic locations such as Scarborough Shoal, attempts to expel another country from a disputed territory, or the declaration of an Air Defense Identification Zone in all or part of the South China Sea," McCain said in an op-ed published Tuesday in the Financial Times.

McCain called for fresh policy options, such as adding an aircraft carrier strike group to upcoming exercises in the region. The carrier group would patrol waters near Scarborough Shoal "in a visible display of U.S. combat power."

Retired Navy Capt. Jim Fanell, a former Pacific Fleet intelligence chief, said he has been closely watching Scarborough Shoal since April 2012, when China took control of the area after a standoff with the Philippines.

Fanell said China appears to be weighing its next move in a larger strategy of "tightening the noose" over the entire South China Sea.

"Heretofore, they’ve been satisfied with reclaiming and building on the seven existing outposts that they’ve had in the Spratly Islands and at Woody Island, but have not moved out to try and take ‘new’ territory within the South China Sea," Fanell said.

"That surely will change as China's ‘maritime sovereignty campaign’ is not just the seven existing Spratly Island outposts and Woody, but is in fact the entire content of the Nine-Dash Line," he added, referring to the vague territorial claim by China that covers most of the sea.

China’s plans to build up Scarborough Shoal also could be a response to an international court ruling anticipated later this month or early next month that is expected to rule in favor of Manila’s claims to the Spratlys.

China may also be moving quickly to build up Scarborough Shoal over concerns the next U.S. president will be tougher on Chinese maritime expansion.

"So, in order to get ahead of this potential confrontation, they will move this year to slice off the next piece of salami—the uninhabited shoals like at Scarborough," Fanell said.

Scarborough was used by the U.S. Navy as a bombing target in the early 1980s, something that could complicate the Chinese development plan.

However, China has controlled the shoal since June 2012 and maintains coast guard ships nearby at most times.

"It would take literally very little effort for China to come in with the same resources and tools that they used at the seven reclaimed islands in the Spratly Islands, and do the same kind of dredging and work to build an ‘island’" at the shoal, Fanell said.

"This is another signal that China intends to complete its ‘Wall of Sand’ to close off the South China Sea to whomever it chooses," said Rick Fisher, a senior fellow at the International Assessment and Strategy Center.

The ships shown in the graphic appear to be Type 054 frigates capable of carrying 32 medium-range surface-to-air missiles and eight anti-ship missiles, Fisher said, noting they are being upgraded for improved anti-submarine operations.

Other warships that could be deployed there include smaller Type 056 corvettes that have two variants, one for maritime patrol and another for anti-submarine warfare, he said.

A military base on Scarborough Shoal would permit China to dominate northern access to the sea and is just over 120 miles west of Subic Bay, where the Navy will soon deploy additional forces to bolster defenses in the region.

"From this future base the 400-kilometer range YJ-62 can attack targets in most of the Philippine main island of Luzon," Fisher said. "China could also deploy longer range anti-ship ballistic missiles to this base."

"We encourage all claimants to clarify their territorial and maritime claims in accordance with international law and to commit to peacefully manage or resolve their disputes including through the use of peaceful dispute settlement mechanisms, such as arbitration," she said.