DF-31A launch was third flight test in past year

China’s military recently carried out a third test of a long-range DF-31A ballistic missile capable of hitting the United States with nuclear warheads.

The test was carried out in complete secrecy as part of China’s policy of not revealing details of its strategic nuclear forces in public.

A Pentagon spokesman had no comment on the flight test. "I recommend you contact the Embassy of the People's Republic of China," Lt. Col. Todd Breasseale said.

Chinese Embassy spokesmen did not respond to email requests for comment about the ICBM test.

The U.S. officials did not provide further details of the flight test.

However, it was the third flight test of a DF-31A within the past year.

By contrast, the Obama administration has put off U.S. ICBM tests several times in recent years in what military officials said were politically motivated delays. A Minuteman III missile test was put off last year until after the presidential election and delayed again until May over concerns an ICBM flight test would be misconstrued by North Korea, which has its own long-range missiles.

Missile analysts said the latest DF-31A test probably was carried out from the Wuzhai Space and Missile Test Center, where earlier tests occurred.

Until last month, China’s most recent DF-31A test took place Nov. 30 when an ICBM was fired from Wuzhai to an impact range in western China.

It could not be learned whether the latest test involved a single dummy warhead or multiple warheads. 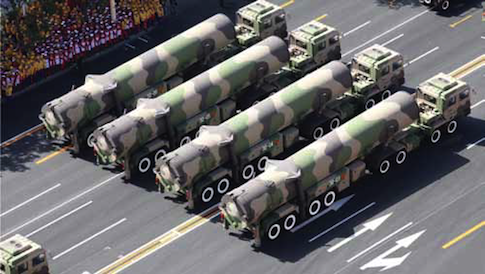 A recently published report by the Air Force National Air and Space Intelligence Center concluded "China has the most active and diverse ballistic missile development program in the world."

"It is developing and testing offensive missiles, forming additional missile units, qualitatively upgrading missile systems, and developing methods to counter ballistic missile defenses," the report said. "The Chinese ballistic missile force is expanding in both size and types of missiles."

According to the report, China’s military has "more than 15" DF-31A launchers for the solid-fueled, single-warhead ICBM that has a range greater than 6,835 miles. Other missile specialists say the DF-31A is capable of carrying up to five nuclear warheads.

The July 24 DF-31A test came exactly a year after the Chinese conducted what U.S. officials said was one of the first flight tests of a new longer-range ICBM called the DF-41, which is expected to be China’s first long-range missile outfitted with multiple warheads.

The Pentagon’s 2011 annual report on China’s military stated that China is continuing to modernize its nuclear forces by enhancing silo-based ICBMs and adding harder-to-detect mobile missile.

"In recent years, the road-mobile, solid-propellant [DF-31 and DF-31A] intercontinental range ballistic missiles have entered service," the report said, adding that the DF-31 A "can reach most locations within the continental United States."

"The DF-31A could be deployed with two to three brigades, which all engage in active year-around training which includes live launches at regular intervals," Fisher said.

"This latest DF-31A test also highlights the fact that China's nuclear missile arsenal continues to grow," he said. "The DF-31A fleet will soon be joined by an initial force of up to 36 JL-2 or JL-2A submarine-launched nuclear missiles within the next year, and these will be followed by multiple warhead or MIRV capable DF-41 road mobile ICBMs."

The DF-41 is expected to be capable of carrying up to 10 nuclear warheads.

A senior Chinese official revealed during talks with U.S. officials in Beijing in 2009 that even the number of Chinese nuclear weapons is a closely guarded secret.

Assistant Foreign Minister He Yafei was quoted in a classified State Department cable made public by Wikileaks that said that if China revealed the size of its nuclear arsenal, it would eliminate its deterrent value.

China conducted a series of flight tests beginning in July 2012 that included the DF-31A, a silo-based DF-5 ICBM test, the DF-41 test, and a flight test of a new JL-2 submarine launched ballistic missile.

All the tests were not made public and Pentagon spokesmen also declined to comment on those tests.