China's military has stepped up militarizing disputed islands in the South China Sea by deploying advanced missile systems on the Spratly islands, according to the Pentagon.

Defense officials disclosed to the Washington Free Beacon that the militarization has raised alarm bells about China's creeping takeover of the strategic waterway used for some $5 trillion annually in international trade.

The officials previewed Defense Department concerns detailed in the forthcoming China military power report. The annual report to Congress is expected to be made public in the near future.

"China is continuing its gradual deployment of military equipment to its Spratly Islands outposts in the disputed South China Sea," said one senior official.

"These deployments involve the delivery of military jamming equipment as well as advanced anti-ship and anti-aircraft missile systems to the outposts."

The most worrisome weapons are missiles.

"The missile systems are the most capable land-based weapons systems deployed by China in the South China Sea," the official said.

The missiles have been identified as YJ-12B anti-ship cruise missiles that give the Chinese military the ability to hit ships within 340 miles—enough to target U.S. warships that frequently transit the waters in conducting freedom of navigation operations. 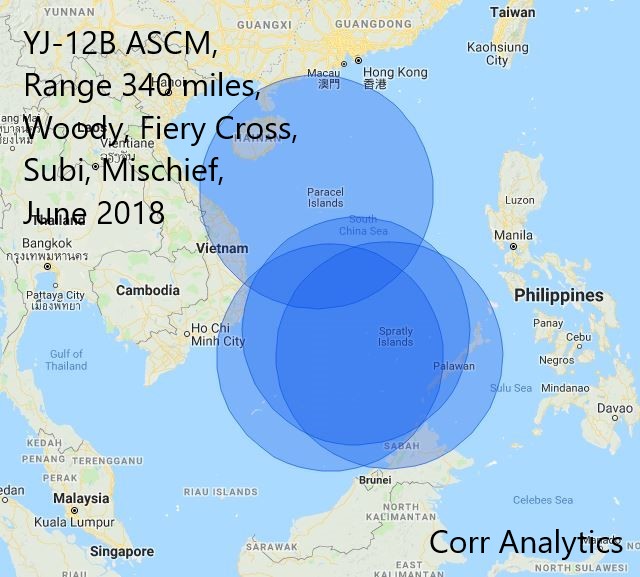 The Pentagon has stepped up Navy warship passages near the disputed islands as part of a policy of asserting international freedom of navigation.

During the most recent operation May 27, two Navy missile ships, the cruiser USS Antietam, and the destroyer USS Higgins, Chinese navy vessels unsuccessfully attempted for force the ships out of the area.

Missile emplacements were first identified several years ago on the Spratlys by the Defense Intelligence Agency. At the time, the missiles assessed as very short-range coastal anti-ship missiles with ranges of a few miles.

The DIA, however, reported internally that the missile emplacements were built on the same infrastructure as could be used for longer-range anti-ship missiles, an indication China eventually planned to swap out the short-range systems and replace them with the more lethal weapons.

That appears to have happened with the recent deployment of the YJ-12Bs.

The air defense missiles were identified by the Pentagon as either HQ-9A or HQ-9B long-range surface-to-air missiles with ranges of up to 184 miles.

The HQ-9s are capable of shooting down aircraft, unmanned aerial vehicles, and cruise missiles.

U.S. military forces recently flew two pairs of nuclear-capable B-52 bombers near the contested South China Sea in a show of force.

Two B-52s were dispatched from the Navy support base on Diego Garcia in the Indian Ocean and flew close to the South China Sea on June 5.

Two days earlier, another set of B-52s, this time from Andersen Air Force Base, Guam, flew to the Indian Ocean but did not pass over the sea.

On Wednesday, another two B-52s flew from Guam to the East China Sea, passing close to Japan's Senkaku Islands north of Taiwan. China is claiming the uninhabited Senkakus as its territory.

The defense official said the missiles remain in place on the Spratlys.

Fox News reported recently that China appeared to remove air defense missiles from Woody Island, part of another set of disputed islands, the Paracels, in the northern part of the sea.

The South China Morning Post, however, reported this week that the missiles were back.

China is claiming 90 percent of the South China Sea based on vague historical map claims. The islands are claimed by several other nations, including Philippines and Vietnam.

The international Permanent Court of Arbitration ruled in favor of the Philippines and against China's expansive claims to own most of the South China Sea in July 2016. China has refused to observe the court's ruling and continues to claim sovereignty of the sea.

China is building up military bases on a trio of Spratly islands located close to the Philippines, a U.S. ally in the region.

Fox News reported, based on satellite images May 9, that two batteries of HQ-9 surface-to-air missiles appeared from photographs to have been removed from Woody Island.

The senior official said the Pentagon is preparing to respond to Chinese military assertiveness in the South China Sea and elsewhere with a series of actions, the official said.

In addition to the missile emplacements, China angered the Pentagon by firing lasers at U.S. military cargo aircraft flying near the Chinese military base on the Horn of Africa at Djibouti.

The laser illumination injured the eyes of air crew members on two flights.

China also has been linked to cyber attacks, most recently a cyber intrusion against a Navy contractor engaged in cutting edge weapons research, including a new submarine-launched cruise missile.

Defense Secretary Jim Mattis first outlined the Pentagon's concerns about Chinese militarization of the islands during a June 2 speech at a defense conference in Singapore.

"Despite China's claims to the contrary, the placement of these weapons systems is tied directly to military use for the purposes of intimidation and coercion," he stated.

To press the issue, Mattis noted that the militarization directly contradicted promises made by current Chinese supreme leader Xi Jinping in 2015 that China had no plans to militarize the islands.

In response to the weapons deployments, Mattis said the initial response was to disinvite the People's Liberation Army Navy from the upcoming Rim of the Pacific international naval exercises involving forces from more than 40 militaries.

"China's behavior is inconsistent with the principals and the purposes of the RIMPAC exercise, the world's largest Naval exercise, an exercise in which transparency and cooperation are hallmarks," Mattis said.

Mattis announced in Singapore he plans to travel to Beijing soon as part of efforts to expand the dialogue with China.

"These facilities significantly expand the real-time domain awareness, [intelligence, surveillance reconnaissance], and jamming capabilities of the PLA over a large portion of the South China Sea, presenting a substantial challenge to U.S. military operations in this region," Davidson told the Senate Armed Services Committee in written answers to questions.

The Chinese military bases on the seven islands include hangars, barracks, underground fuel and water storage facilities, and bunkers for "offense and defensive kinetic and non-kinetic systems," he said.

With the weapons systems on the islands, Davidson issued this stark warning: "The PLA will be able to use these bases to challenge U.S. presence in the region, and any forces deployed to the islands would easily overwhelm the military forces of any other South China Sea-claimants. In short, China is now capable of controlling the South China Sea in all scenarios short of war with the United States."

Rick Fisher, senior fellow at the International Assessment and Strategy Center, said the missiles in the Spratlys could have been stored on Woody Island and moved south

"To deter China in the South China Sea it is necessary for the U.S. to base long range offensive ballistic and cruise missiles in that region," Fisher said.

"If they cannot be based in the Philippines, we need to have them on ships, or quickly develop our own intermediate-range ballistic missiles to base on Guam."

Fisher said Chinese Communist Party leaders "must be made to understand that any use of weapons from its South China Sea islands will result in the immediate destruction of its illegal island bases."

Retired Navy Capt. Jim Fanell said if the missile deployments on the Spratlys are confirmed it would represent a significant increase in the military threat to the region.

"The PRC's ultimate objective is to drive the U.S. military out of Asia and replace it with a PLA that is able to force the restoration of what Beijing believes is their sovereign territory—the entirety of the Nine Dash Line in the South China Sea," Fanell said.

The failure of the Obama administration to confront China has limited U.S. options, Fanell said.

"However, the use of force should not be discounted," he said. "As we've seen with this administration's use of 'maximum pressure' against North Korea, the same approach can yield results against the Chinese Communist Party."