A rash of bomb threats were made against at least five U.S. flights on Tuesday, prompting the evacuation and search of one U.S. Airways plane in Philadelphia, according to reports on the incidents, which appear to be more widespread than previously believed.

These threats follow a series of similar incidents beginning in late May in which an anonymous individual called local police and other authorities to warn against explosive and chemical attacks on at least 10 flights.

The FBI is investigating the threats against international flights, but it remains unclear whether domestic ones also have been subjected to a rash of threatening calls.

The threats made on Tuesday against the five flights were deemed not credible after investigation by authorities. However, the phoned-in threats have disrupted air travel for many and raised alarms about the prospect of a terror attack.

While it remains unclear who is behind the threatening calls, some reports claim they are being carried out by those sympathetic to the Islamic State terror group.

The pattern is similar to what happened on May 23 to a Southwest Airlines flight from Baltimore-Washington International (BWI) airport to Denver, according to sources who spoke about the incident, which until now has not been reported.

The Southwest flight was held at Denver International Airport late last month following a threatening phone call that posed a possible security threat, according to the airline and those aboard the plane.

Southwest confirmed that a security threat forced the flight to hold at Denver International Airport for further inspection.

"Southwest was notified of a potential security threat to inbound flight 986 from Baltimore Washington International Airport to Denver International Airport," a spokesman said. "Upon safe arrival, the aircraft taxied to a remote part of the airport where Southwest fully cooperated with law enforcement agencies leading the investigation. The aircraft was cleared to resume service."

Southwest would not provide further details about ongoing investigations into what took place.

"Southwest’s first priority is the safety and security of our customers and employees," the spokesman said. "To respect the integrity of the investigation, we do not have any additional details to share."

A FBI official did not respond to multiple requests for comment seeking information about the incident and whether the agency is investigating it. The FBI also would not answer questions about the nature of threats against U.S. domestic flights.

One passenger who was aboard the Southwest flight, which was scheduled to continue from Denver to Las Vegas, said that the plane was put under quarantine due to a threatening phone call.

"The pilot told the passengers that the quarantine was due to a threatening phone call regarding a flight from Denver to Vegas; our flight was supposed to continue to Vegas after our Denver stop," said the passenger, who asked to remain anonymous due to the sensitivity of the situation.

"Dozens of authorities met our plane on the runway after we were sequestered several miles from the main terminal," the passenger said, adding, "canine units sniffed all luggage." 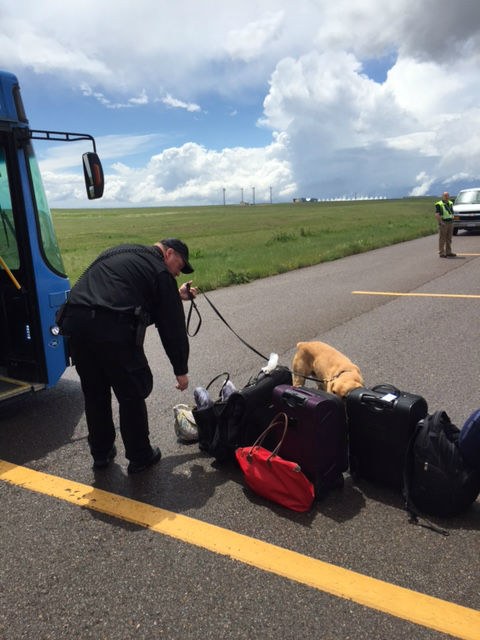 Search of the Southwest flight by canine units. 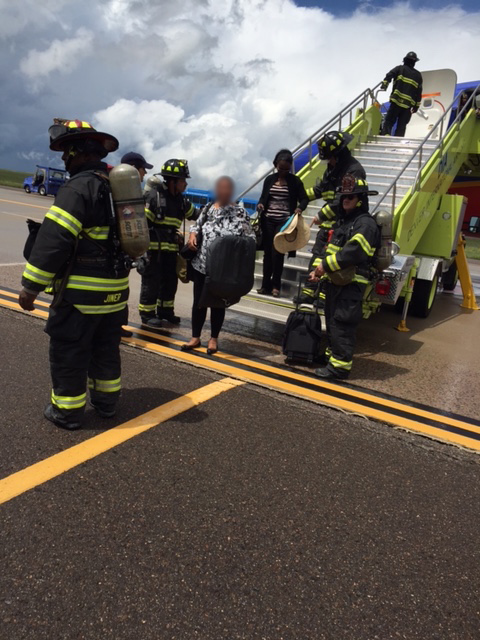 "All told, we were on the runway for about two hours before deplaning and then we waited another hour on the transport bus," said the passenger. "It was maddening to have your vacation shortened by a day in the airport, but we were glad to be safe."

In each case so far, planes that have been subjected to these bomb threats have landed safely and have been found to be free of explosives.

Five bomb threats were made on Tuesday against a wide array of carriers landing in the United States, including U.S. Airways, Delta Air Lines, United Airlines, Volaris, and Korean Air, NBC News reports.

The jump in phone-based threats comes on the heels of reports showing that the Transportation Security Administration (TSA) failed to detect bombs and other weapons in at least 95 percent of cases.

The disclosure has led to a major shake-up in the agency and promises from the Obama administration that security at airports would be tightened.

Rachel Ehrenfeld, founder and CEO of the American Center for Democracy and the Economic Warfare Institute, said that in addition to the panic caused by threats of this nature, the economic toll could be just as devastating.

"The summer season is here and threatening air travel works well to undermine the economy, not only to scare the public," Ehrenfeld said. "Though it is interesting that today’s threat comes after the unsurprising news that the TSA fails miserably to do its job."

"Also, false alarms would lead the profit-oriented airlines to throw caution to the wind, [which is] not good if you happen to be on the plane that wasn’t carefully checked and its passengers passed one of the 95 percent TSA checks," she said.

Update June 3, 11:59 A.M: Following publication of this article, a federal law enforcement official told the Free Beacon that investigations of the threats made against airline flights are ongoing.

"We are investigating a number of threats made against airline flights," the official said. "Although the threats do not appear to be credible, we nevertheless take any threat to aviation seriously and will work with prosecutors to identify and charge the responsible parties."