Argentina's Navy has called off its search for the missing ARA San Juan crew members, acknowledging the diminished chance of finding anyone alive.

The submarine and its 44 crew members had been been missing for weeks, and the point had passed when those aboard would have run out of oxygen without surfacing, the Independent reports.

Argentine Navy official Enrique Balbi said on Friday that the search for the wreckage remained an "active one," but acknowledged there was "no change of survival," CNN reported.

"Given … the amount of time that has passed, the extreme and adverse conditions that I have been discussing, we have inferred that there is no chance of survival," spokesman Enrique Balbi said.

"We are using all means at our disposal, both national and foreign, in the search," Balbi added. "This will obviously be key in order to conduct our investigation."

Balbi acknowledged search efforts will now focus on recovering human remains and determining the cause for the loss of vessel.

The submarine first went missing on Nov. 15, according to CNN.

The ARA San Juan disappeared November 15 off Argentina's coast, about midway on its journey from Usuaia in the country's south and its northern port of Mar del Plata. The search centered on an area roughly 900 kilometers (559 miles) off the Argentine coast.

At the height of the search, 28 ships and nine airplanes from 11 nations — including the United States and United Kingdom — scoured the sea, backed by more than 4,000 people. The search area extended more than 480 square kilometers (185 square miles) and was roughly 900 kilometers (559 miles) from the Argentine coast.

The German-built diesel-electric submarine had reported water leakage that led to a battering short circuiting and the beginnings of fire. More than a week later, a noise, consistent with an explosion, was detected near the last known location of the missing submarine on the day it vanished.

Word of the possible explosion at the time angered relatives, who seek answers and accused the military of refusing to admit the submariners were dead. The Argentine Navy's first female submarine officer was among those onboard. 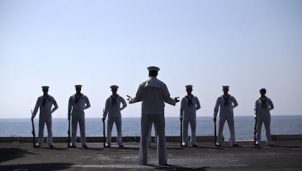