The report is significant for its bipartisanship. Clark is a former Democratic presidential candidate and retired four-star NATO commander. Karber was a strategy adviser to Reagan administration Defense Secretary Casper Weinberger.

U.S.-Russian tensions escalated last weekend when a Russian jet flew fewer than 1,000 yards above a U.S. warship in the Black Sea, the Pentagon said Monday.

The incident occurred Saturday as the guided-missile destroyer USS Donald Cook patrolled waters in the western Black Sea and was buzzed 12 times in low-altitude passes by a Russian Su-24 attack jet in a move the Pentagon called "provocative."

"This provocative and unprofessional Russian action is inconsistent with international protocols and previous agreements on the professional interaction between our militaries," said Army Col. Steve Warren, a spokesman.

The report on non-lethal defense aid concludes that the administration must reverse its decisions in declining urgent requests from the Kiev government to supply needed military aid, specifically body armor, night vision goggles, secure communications gear, and aviation fuel. The aid was turned down as "provocative," the report said.

The report said confusing force multiplier criteria is being used to prohibit significant nonlethal military aid and should be replaced with a clear policy of barring lethal weapons and ammunition, but sending all other nonlethal gear, with a priority on the vests, goggles, radios, and fuel.

U.S. officials have said the non-lethal aid limits are part of the administration’s conciliatory policy of seeking to avoid upsetting relations with Moscow. The administration believes sending needed non-lethal military aid will be viewed as a provocation and prompt Moscow to invade and seize a land bridge in Ukraine as a supply route between Crimea and Russia, the Wall Street Journal reported Friday.

Additionally, deliveries of non-lethal aid are being harmed by bureaucratic bottlenecks as the Pentagon is facing severe defense budget shortfalls to maintain its own forces, the report said.

"The administration needs to immediately appoint a high-level official with military experience and a ‘get it done’ attitude—armed with presidential authority—to cut across bureaucracy and insure prioritization and timely delivery of all non-lethal military assistance it is possible for the U.S. to provide to Ukraine," the report said.

The United States announced weeks ago that it would supply Ukraine with sleeping bags, military Meals Ready to Eat (MRE), and diesel fuel used by tanks to Ukrainian forces. However, the deliveries were delayed after the Pentagon decided to ship the goods by truck instead of aircraft.

The three-page situation report was sent to Congress and the White House. A copy was obtained from a congressional aide.

The report is the first of three bipartisan field reports by the two former officials. Future reports will outline military options for deterring and defending Ukraine, and western response options to a Russian invasion and what is expected to be an extended Ukrainian insurgency against a Russian military occupation after an invasion.

Clark and Karber traveled to Ukraine earlier this month at the request of the interim government in Kiev. They were asked to assess the country’s military needs.

Russia has massed between 40,000 and 80,000 troops in two echelons along Ukraine’s eastern border. Additionally, the administration last week accused Russia of sending agents to foment unrest throughout the country as part of efforts by Moscow to take over the country or create the pretext for a military invasion. 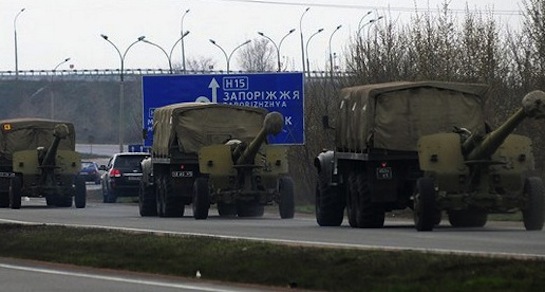 Large numbers of Russian military forces also are threatening Ukraine from the southern Crimean peninsula, which was militarily annexed last month, and near western borders with Belarus and Moldova.

Ukraine has eight brigades—between 20,000 and 32,000 troops in the eastern part of the country and a similar number deployed in the western part. It is outnumbered by a troop ratio of 2.5 to one.

"Ukraine is facing serious military threats on a 300-degree arc from the territories of [Belarus], Russia, occupied Crimea, the Black Sea and Transneister [Moldova]," the report said, noting that the 1,000 mile front is three times longer than Ukraine’s armed forces are equipped to defend.

Clark and Karber said in the report that despite shortages and aging military gear, the Ukrainian army is nearing completion of the largest peacetime mobilization in Europe since the end of World War II.

"They are digging in and are preparing to fight," Karber said in an interview.

Karber said that if Russia invades an estimated 5 million to 20 million Ukrainians—nearly half the population—are set to flee westward. Ukrainians also are preparing for insurgency warfare against a Russian occupation, he said.

For Ukraine to conduct a sustained military defense against Russia, its military needs air defenses, anti-armor weapons from nearby states with common equipment, such as MiG-29 jets, T-72 tanks, and shoulder-fired anti-aircraft and anti-tank missiles, the report said.

"However, the most important assistance currently needed to make the existing Ukrainian force as defensible as possible in the current crisis (between now and the elections of 25 May) is non-lethal equipment from the U.S.," the report states.

"Again this is a technology routinely available to the Russian army and if it is provocative, then that provocation needs to be answers with [a] symmetric response," the report said.

The Ukrainians also urgently need U.S. digital satellite radios for communications among units operating along the long front. Current Soviet-era analog military communications gear is inadequate and "will likely be taken down in the initial hours of conflict," the report said.

Under the restrictive "force multiplier" ban, the satellite radios supplied to some Ukrainian troops that fought with U.S. forces during the Iraq and Afghanistan conflicts cannot be sent to additional units.

For Ukraine’s small air force, aviation fuel is a fourth urgent requirement. Helicopters needed for surveillance of the borders are being grounded to save fuel for the anticipated future conflict.

"The U.S. ban on aviation fuel as a ‘force multiplier’ is blatantly ridiculous at a time that Russian aircraft and UAVs are routinely flying the Ukrainian border within minutes of target," the report said. "Again, to respond to aggressive provocation is not provocative—indeed, unanswered it incentivizes continued provocation."

The report concludes that in addition to military aid, the Ukrainians need U.S. military advice.

"As the crisis deepens, Ukraine needs a seasoned professional American military and national security advice to assist them in making prudent and wise decisions," the report says.

"If this cannot be provided by active military and civilian professionals, plans should be made to bring in retired senior people to help."

Sen. John McCain said on Sunday that the United States needs to supply Ukraine with weapons.

"We ought to at least, for God's sake, give them some light weapons with which to defend themselves," McCain said on CBS "Face the Nation.

"So far this administration's not done that, but they won't even share some intelligence with the Ukrainian government," he said. "I can tell you from my conversations with people in the government, they feel abandoned by us, and rightfully so. This is shameful."

McCain said the president and Secretary of State John Kerry have said further U.S. actions would be taken against Moscow unless the Russians take steps to "de-escalate" the crisis.

"But they haven't de-escalated. In fact they [are] now using their GRU—the secret service, secret special forces people that are fomenting this discontent," he said.

"People in eastern Ukraine don't want this, even though they are leaning sort of pro-Russian," McCain said. "They don't want this kind of thing. They want a government of Ukraine. And unfortunately, I can tell you from talking to them, they feel that we are not giving them the support that they need."

"Our main focus continues to be on supporting economic and diplomatic efforts to de-escalate the situation," she said. "And as the president said, we do not see a military solution to crisis."

Pentagon spokeswoman Eileen Lainez said a variety of requests for military assistance are being reviewed together with the State Department.