2015 Man of the Year: Foul-Mouthed Boy Who Loves the Troops and Hates ‘Those ISIS F***s’

While he won’t be winning any awards for his etiquette, one 10-year-old boy endeared himself to America’s men in uniform this year with a candy-laden care package and a colorful letter of support.

Misty Allen-Brummett, a military wife, posted a letter to Facebook in November from a boy who had written to express his heartfelt thanks to those serving in the armed forces, including her husband, who sent her a photograph of the message. 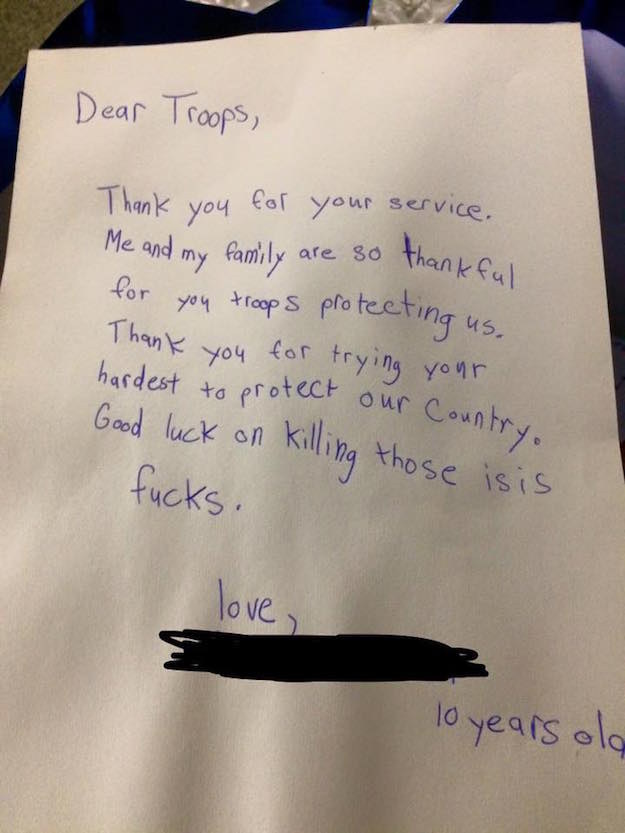 "Dear Troops," he wrote in the letter, "Thank you for your service. Me and my family are so thankful for you troops protecting us. Thank you for trying your hardest to protect our Country. Good luck on killing those isis fucks."

According to Allen-Brummett, the military personnel who saw the letter, which was sent with the boy’s generously donated stash of Halloween treats, found the letter amusing.

Allen-Brummett said that after the image went viral on Facebook she was contacted by the boy’s mother, who told her that "at first [she] was going to make him change the bad language but then decided that maybe the troops would get a good laugh and sent it with his candy and a letter from herself."