When the May jobs report from the Bureau of Labor Statistics was released Friday, the positive numbers caught many by surprise—including the Washington Post, which mistook the job gains for losses.

"Grim milestone to be reached as May unemployment rate nears 20 percent," the Post falsely stated in a tweet at 9:46 a.m. that was soon deleted.

A correct tweet soon followed, saying, "U.S. jobless rate unexpectedly declined to 13.3 percent in May amid pandemic," although the story pictured still carried the "grim milestone" headline with the false 20 percent figure. 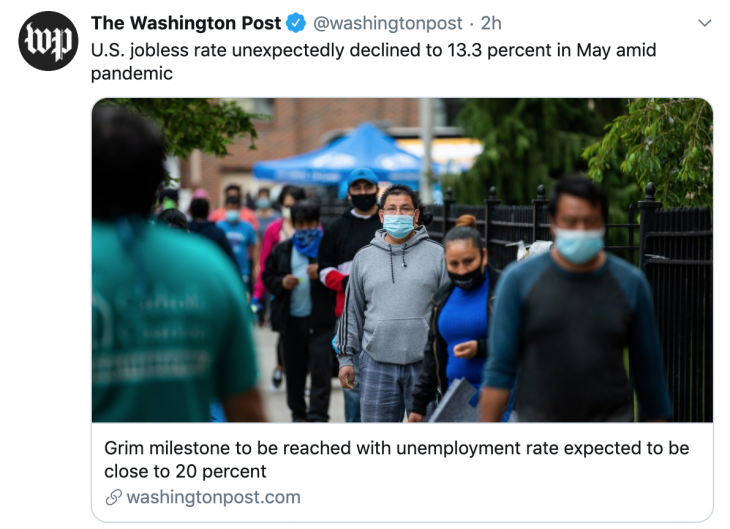 The text of the Post‘s story, written by economics reporter Eli Rosenberg, remained incorrect even after the headline was changed, according to a screenshot tweeted by author and podcast host Neil Cybart.

Looks like the Washington Post pre-wrote their May jobs report article and assumed the 2.5M payroll figure that was released had to have been a drop. Instead, payrolls increased by 2.5M. Oops. pic.twitter.com/q9OJaVWum9

The Post later corrected its story to reflect the real picture of the jobs report. The new version of the article says the economy is recovering "more quickly than economists had projected," as many states and localities have begun partially reopening after lockdowns in response to the coronavirus:

The federal unemployment rate declined to 13.3 percent in May from 14.7 percent in April, the Department of Labor said Friday, a sign that [the] economy is recovering more quickly than economists had projected.

The economy gained 2.5 million jobs in May, as many states and counties began to reopen with the slowing of coronavirus cases nationwide.

The improvement in the labor market was unexpected good news on Friday, with the jobless rate falling to 13.3 percent in May from 14.7 percent in April, which was the highest since World War II. Surveys also show consumer confidence, manufacturing, and services industries are stabilizing.

"These improvements in the labor market reflected a limited resumption of economic activity that had been curtailed in March and April due to the coronavirus pandemic and efforts to contain it," the Labor Department said in a statement.

Biden Agenda Hangs by a Thread