Just a week after the appearance of the Republican senator's byline in the paper sparked outrage among Times employees, a new ad from Cotton's affiliated political action committee is plastered on the Times‘s website. A top adviser for Cotton praised the paper for running the ads, which target Democratic presidential nominee Joe Biden and portray him as "too confused to lead." 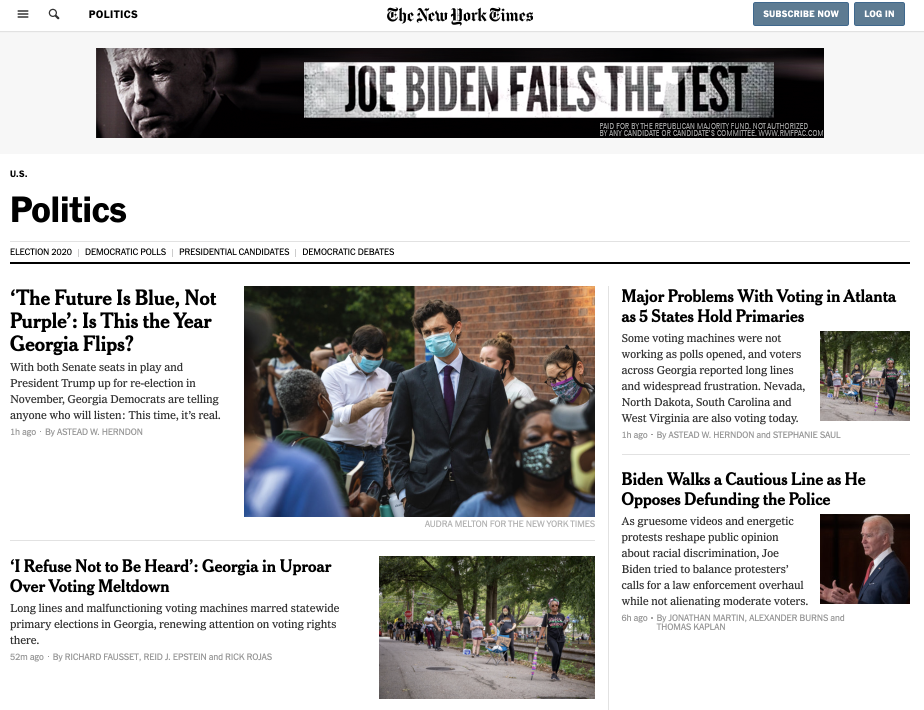 Cotton and his allies are reveling in the internal drama his op-ed caused at the Times. Cotton said it "exposes the hypocrisy of all these woke progressives who claim to defend liberal values." Cotton's team said the drama caused a substantial boost to his fundraising that helped him purchase the ads placed in the Times.

Cotton's June 3 op-ed called for the use of military force to quell riots across the country. Its publication caused an uproar at the paper, with many reporters taking to social media to say that running the op-ed put black staffers at the paper in danger. The Times ultimately put an editors' note on the piece saying it "should not have been published," and editorial page editor James Bennet resigned over the decision to do otherwise.

Cotton has continued to bait staffers at the paper, thanking the Times in a Wednesday morning social media post for publishing a previous op-ed of his that advocated for the United States to purchase Greenland.

Happy that today @StateDept is reopening its consulate in Nuuk, Greenland. PHASE ONE COMPLETE.

Thanks to @nytopinion for publishing my op-ed on this important issue!https://t.co/TzR1Jqz2dH

Cotton's campaign said he has raised nearly $200,000 since his op-ed was published, an impressive haul for a senator who, despite being up for reelection this year, does not have a Democratic opponent. His campaign plans to spend much of the money it raised to influence the top of the ticket, attacking Biden with ads such as the one placed in the Times. The ad highlights Biden's record on China as well as his many verbal snafus.

IRS Sent Over $1 Billion In Stimulus Checks To Locked Up Criminals, Including Murderers

The New York Times Is Hiring a ‘Right Wing Media’ Reporter. Meet the Finalists for the Job.