Two Los Angeles sheriff's deputies are fighting for their lives after being ambushed and shot in their car Saturday night in Compton, Calif.

As the two were rushed to the hospital, anti-police protesters blocked the entrance to the hospital and shouted, "We hope they die," according to the Los Angeles County Sheriff's Department.

To the protesters blocking the entrance & exit of the HOSPITAL EMERGENCY ROOM yelling "We hope they die" referring to 2 LA Sheriff's ambushed today in #Compton: DO NOT BLOCK EMERGENCY ENTRIES & EXITS TO THE HOSPITAL. People's lives are at stake when ambulances can't get through.

Surveillance video of the shooting shows a suspect approaching the deputies' parked car before pulling out a gun and shooting into the passenger side of the car. The suspect flees immediately after the shooting.

"That was a cowardly act," Los Angeles County sheriff Alex Villanueva said. "The two deputies were doing their job, minding their own business, watching out for the safety of the people on the train."

Villanueva added that he had sworn in the deputies 14 months ago.

A manhunt is underway for the shooting suspect. The police were not able to offer any further description of the suspect other than that he is a man. 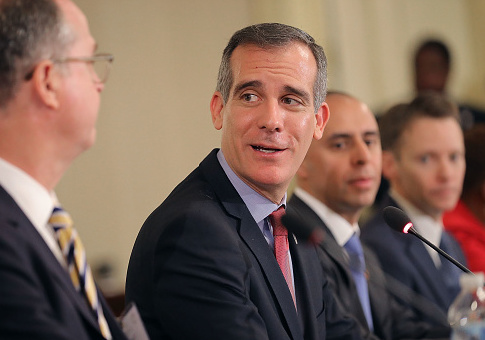