In New York’s Crown Heights neighborhood and nationwide, anti-Semitic violence is still common. Why is it taken for granted?

There is little physical evidence of the bloody history at the corner of President St. and Brooklyn Ave., where in 1991 a gang of young, black men surrounded, beat, and stabbed Yankel Rosenbaum to death. Today, the corner is home to a Christian school and a defunct children’s Yeshivah. The surrounding blocks are dotted with shuls and kosher restaurants, everything you would expect in a thriving Jewish neighborhood.

But the three-decade interlude has not brought an end to anti-Semitic attacks against Crown Heights’ residents. Since 2019, there have been 20 anti-Jewish hate crimes in the surrounding 71st precinct, the fourth most for any single NYPD precinct. That includes multiple incidents of aggressive harassment, three robberies, two assaults, and one instance of "terroristic threats." As before, gangs of roving teenagers still feel comfortable beating Jewish men in broad daylight.

Rosenbaum’s death, and the ensuing riots, ought to have been a watershed for anti-Semitic violence in America. But three decades later it remains commonplace, as this past summer saw renewed aggression against Jews from Crown Heights to Los Angeles. In spite of this spike, however, the reality of anti-Semitic crime continues to receive little notice. Even as tens of thousands rally against other forms of hatred, anti-Semitism remains the blind spot.

In New York, anti-Semitic hate crimes surged this summer after a year of abeyance, with over 120 offenses reported by the end of June. A recently released repeat offender attacked an Orthodox family with a knife; a minivan driver tried to run over five Hasidic men; and four synagogues were vandalized in the Riverdale neighborhood.

The uptick has many fearing a return to the pre-COVID status quo, when a wave of hate crimes made assaults on conspicuously Jewish New Yorkers a weekly or even daily occurrence. The violence culminated in two shocking attacks in the greater New York area: a shooting at a kosher grocery in Jersey City, which left six dead, and then a mass stabbing perpetrated in the home of a Hasidic rabbi in Monsey, N.Y.

Mayor Bill de Blasio responded to that surge by deploying more NYPD patrols and expanding anti-bias education in the city’s schools. Eric Adams, the city’s likely next mayor, has promised a "zero-tolerance" policy for all hate crimes, including anti-Semitic ones.

But neither the current nor the future mayor has outlined the scale of the problem. While Jews are just 7 percent of New Yorkers, anti-Semitic incidents make up 48 percent of hate crimes reported to the NYPD since 2017. Only one in four of those offenses resulted in an arrest, a lower clearance rate than almost every other bias category.

These trends make anti-Semitic crime something of an anomaly. Violence in general has plummeted in the Big Apple: Between 1991 and 2019, violent crime fell 72 percent, while homicides dropped 85 percent. But violence against Jews is the exception. In 1991, the NYPD counted 162 anti-Semitic hate crimes in the city; in 2019, there were 242. 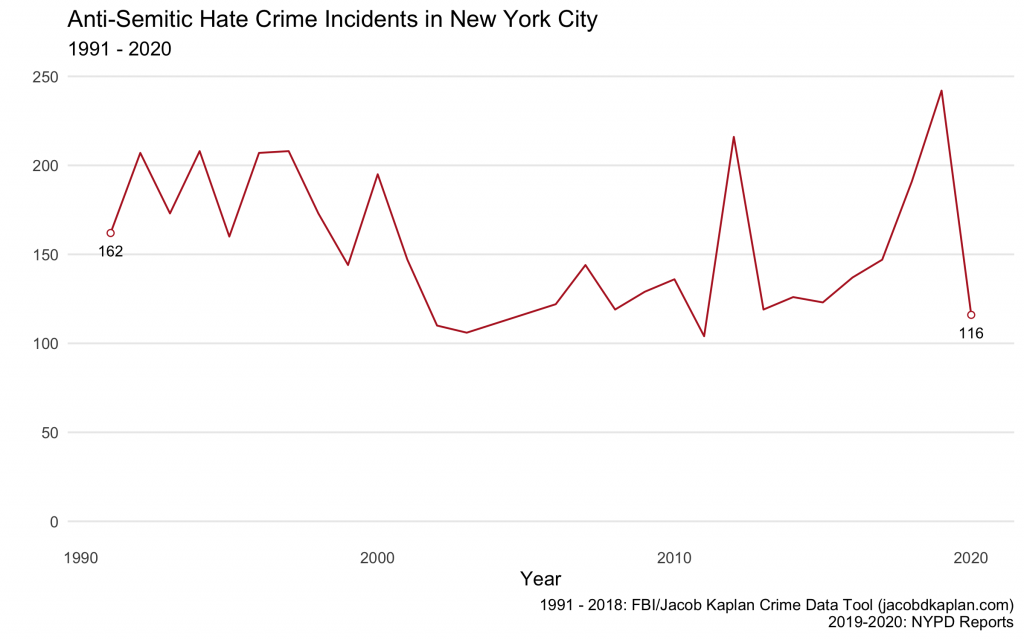 New York City, though home to the plurality of anti-Semitic hate crimes, was not alone in seeing a new wave of anti-Jewish hate over the past three years. The Anti-Defamation League found that 2019 was the worst year for anti-Semitic incidents since it began keeping records. Nationwide, such offenses increased in all but one year between 2014 and 2019. FBI data show that Jews are the religious group most likely to be victimized by hate crimes; only gay men and transgender people have a higher rate of victimization relative to their share of the population.

Just as in New York, renewed conflict in Israel has given anti-Semites in other cities pretext for Jew bashing. Outside of Chicago, hundreds of Jews rallied after a local synagogue was vandalized by a "pro-Palestinian" protester. In Los Angeles, men bearing a Palestinian flag threw glass bottles and hurled slurs at Jewish diners in the Beverly Grove neighborhood. And in Boston, Rabbi Shlomo Noginski was stabbed eight times in broad daylight in front of a local Chabad house.

Anti-Semitic violence, in other words, has risen everywhere. Coming after a year in which more Americans than ever expressed vocal opposition to prejudice, one would expect a media bonanza, protests nationwide, and congressional action.

Instead, focus landed on an unexpected spike in hate crimes against Asians, first in the early days of the pandemic and then, somewhat inexplicably, again a year later. Thousands took to the streets under the hastily organized banner of #StopAsianHate. Celebrities spoke out en masse, and Congress organized hearings that culminated in the passage of a federal law, the COVID-19 Hate Crimes Act. The bill is explicitly intended to combat anti-Asian bias crime; Jews go unmentioned in its text. 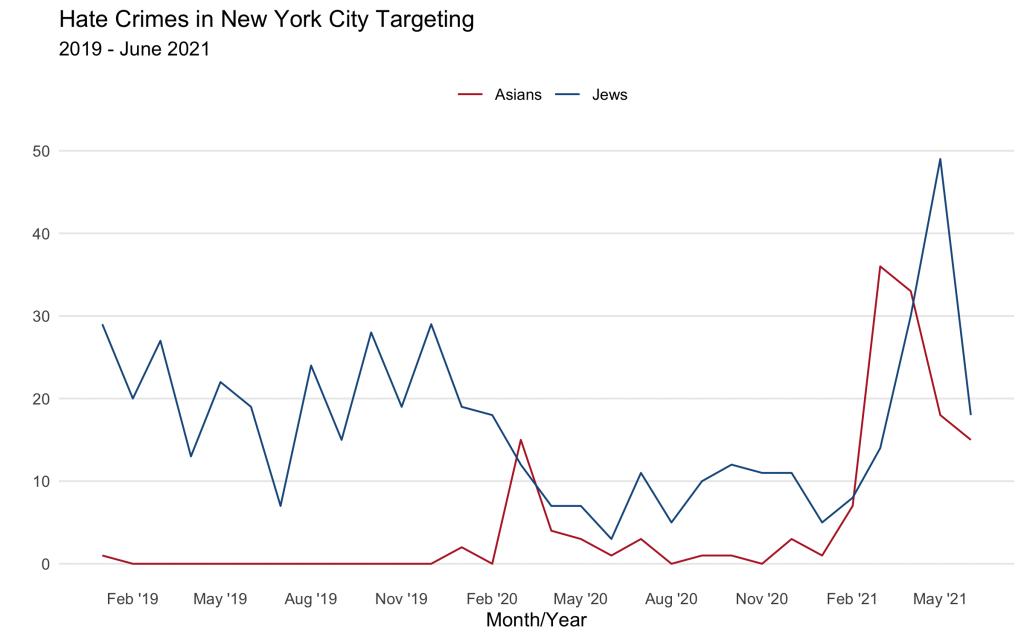 All of this came as anti-Semitic hate crime likely remained, in absolute terms, more prevalent than anti-Asian hate crime. National figures will not be available for some time, but in New York, which is home to large Jewish and Asian populations, there were more anti-Jewish than anti-Asian bias crimes in all but 3 of the last 18 months.

Some of the difference in attention can be attributed to relative increases—anti-Asian bias crime rose an estimated 145 percent in 2020, while anti-Semitic bias crime just remained as high as it’s ever been. But the lack of concern for anti-Semitic incidents reflects a greater apathy for the plight of Jews, particularly if they choose to dress or act in a conspicuously Jewish fashion. Anti-Asian violence is surprising and noteworthy; anti-Semitic violence is the same-old, same-old.

Such violence will continue, no doubt, as long as the public and policymakers treat it as normal. Just as apathy toward their views gives cover to anti-Semites on the left and right, so too does denial of the continuing reality of anti-Semitic violence give permission to the mob to keep beating and killing Jews just for the crime of being Jewish.