President Joe Biden justified his authority to forgive up to $20,000 in student loans per borrower by citing a nearly 20-year-old law for veterans, active-duty service members fighting in Afghanistan and Iraq, and victims of terrorism.

"All of this means people can start finally to climb out from under that mountain of debt," Biden said in remarks from the White House announcing the loan forgiveness. "To finally think about buying a home or starting a family or starting a business. And by the way, when this happens the whole economy is better off."

What Biden didn't mention in his public remarks is the law he's using to do so: the largely unknown Higher Education Relief Opportunities for Students (HEROES) Act of 2003. That bill was never meant to be a bailout for typical college grads, but a technical fix to benefits for active-duty troops.

The HEROES Act was signed into law by then-president George W. Bush as part of the federal government's effort to provide financial security to soldiers fighting overseas. The bill grants the secretary of education the ability to "waive or modify any statutory or regulatory provision applicable to the student financial assistance programs … in connection with a war or other military operation or national emergency to provide the waivers or modifications authorized."

"By bringing a little more peace of mind to student soldiers, we are doing our part to protect them as they protect us," said then-representative John Kline (R., Minn), the author of the bill, at the time.

The bill‘s stated purpose was to "provide assistance with [military personnel's] transition into and out of active duty and active service." The HEROES Act received little attention in the media. When the bill did make it into newspapers, reporters described it as support for soldiers called into active duty. 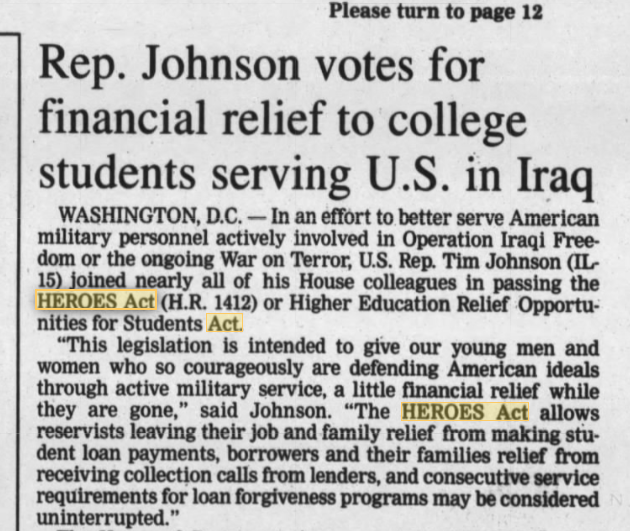 Here's a headline from the Daily Republican-Register in Mount Carmel, Ill.: 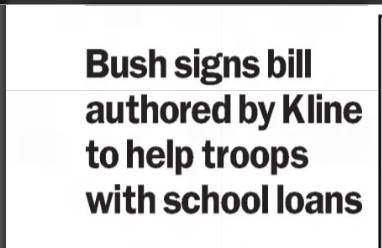 Then-Democratic senator and presidential candidate John Edwards (N.C.) faced criticism for delaying the passage of the bill. His reason? Edwards didn't want the secretary of education to hold that authority. 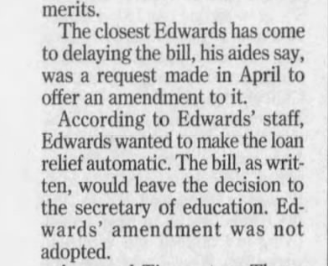 Here's how the Early Bird newspaper in Arcanum, Ohio, described the bill: 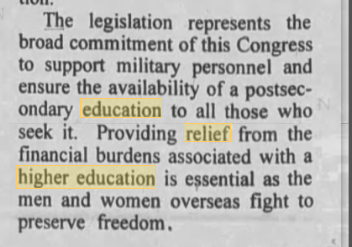 The Army celebrated the passage of the HEROES Act as evidence of the country's "support for military personnel, allowing the secretary to address the needs of those serving now, and provide flexibility and relief for those who may need it in the future."

The authority to pause or cancel student loan debt was meant to be temporary, according to a Bush statement at the time. 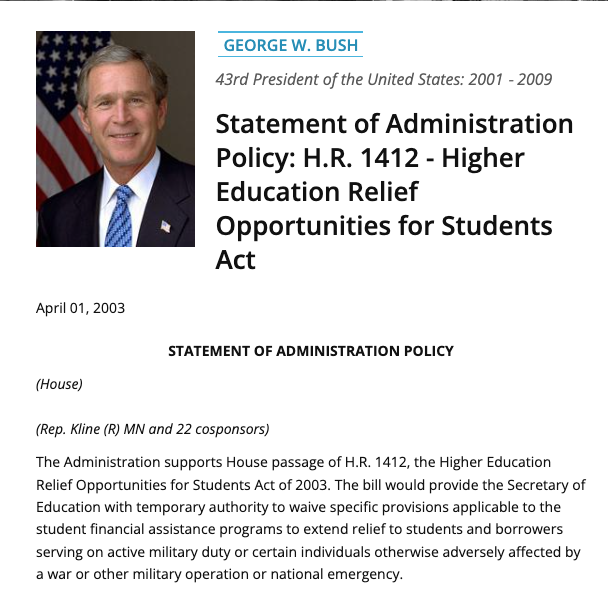