A group of World War II veterans in an Honor Flight group Tuesday knocked over barriers imposed during the government shutdown at the WWII Memorial in Washington, D.C., to get inside.

As part of the federal government shutdown, national parks are closed. But the group of veterans continued to the monument Tuesday, as reported by Stars and Stripes reporter Leo Shane:

Honor flight vets just knocked over the barriers at the WWII memorial to get inside, #shutdown or no. pic.twitter.com/T4bx8kvFYj

No sign of folks leaving. The vets have control of the memorial. #shutdown pic.twitter.com/eGj4kmFEiP

Credit where due — I watched Rep Steve King distract a park police officer while vets and staffers knocked down the fences here. #shutdown

Update: WFB staff writer Lachlan Markay arrived at the WWII Memorial, where a second group of Iowa vets (in yellow shirts) have also arrived at the memorial. Park police are letting all vets through, according to Shane.

"We're looking about how to deal with this in the future," Park Police spokeswoman Carol Johnson said Tuesday.

Made it down to the WW2 memorial. Looks like vets are being allowed to walk down freely. pic.twitter.com/AMncX5jZff 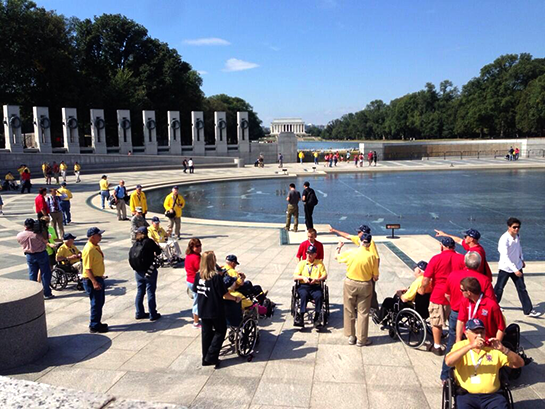