A key decision made to curb the opioid crisis not only made that situation worse, but also caused a surge in deadly hepatitis C infections, a new paper argues.

Hepatitis C is the most common blood-borne infection in the United States, and is, according to the paper, responsible for more deaths annually than any other infectious disease. Once infected, the virus can take ten to forty years to fully induce its effects; the results, however, are eventually deadly unless treated.

Acute cases of the disease began to fall in the 1990s and plateaued in 2003—a positive sign for public health. However, hepatitis C infections began to take off in 2010. The reason why, economists David Powell, Abby Alpert, and Rosalie Pacula argue in the new paper, is the reformulation of the frequently abused opioid drug OxyContin, a product of Purdue Pharma.

Prior to reformulation, OxyContin was extremely popular in illicit markets because its timed release mechanism meant that it contained large quantities of oxycodone—substantially more than "all-at-once" pills. Users would crush the pill and extract the oxy within, getting a longer lasting and more potent high.

Amid a nationwide crackdown on prescription opioids under the Obama administration, the Food and Drug Administration gave Purdue permission to reformulate its flagship drug. The new version gelled up on crushing, leaving it useless. This, regulators thought, would help slow the increase in deaths then attributed to OxyContin.

Instead, users began switching from pills to injected heroin, with all of the dangers that entails. That includes infection with hepatitis C, which can be transferred by sharing improperly sanitized needles.

"The reformulation did not generate a reduction in combined heroin and opioid mortality," Evans et al. conclude. "Each prevented opioid death was replaced with a heroin death."

Powell et al. now argue that not only did the reformulation of OxyContin not lower overall opioid deaths, but it also led to more dangerous drug use practices. Specifically, using state-level data, they show that reformulation led to a surge in both heroin overdose deaths and hepatitis C infections. 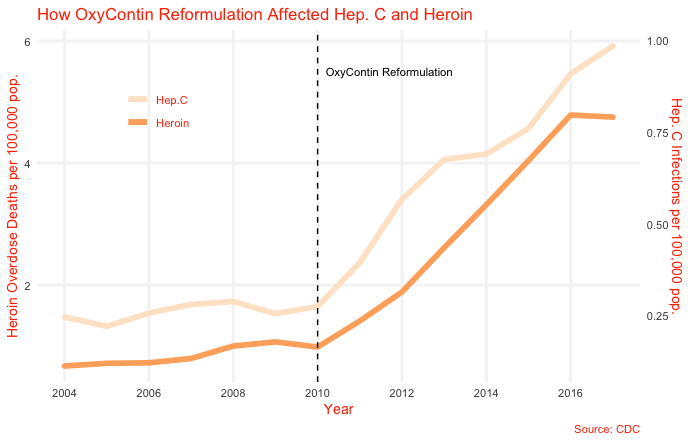 "The introduction of abuse-deterrent OxyContin played a leading role in the rapid increase in hepatitis C infections in the United States," the authors conclude.

This conclusion matters in no small part because controlling the availability of prescription opioids has been a major focus of regulators seeking to combat the drug crisis. The Drug Enforcement Agency sets quotas for prescription drug production every year, so reducing that quota, along with tools like Prescription Drug Monitoring Programs and abuse deterrent reformulations, has been meant as a way to reduce overdose death rates.

However, as Evans et al. show, a decline in the availability of prescription opioids only leads users to substitute for heroin, keeping steady or even increasing overdose death rates in the aggregate. Powell et al.'s analysis shows that this transition is associated with riskier drug use, likely including the sharing of needles, and consequently even further harm to drug users.

In other words, the new study further confirms that the prescription drug crackdown cannot really abate the opioid crisis. Recent research in the Journal of the American Medical Association estimated that controlling prescription opioids would only reduce drug deaths by 3 to 6 percent by 2025. Even if all prescription drug abuse stopped in 2016, the paper argued, almost 580,000 people would still die from opioid overdose over the subsequent nine years.