The Drug Enforcement Agency proposed Monday to cut its quota for pharmaceutical opioids by some 169 million pills in 2019, following a call by President Donald Trump to slash production to combat the drug epidemic.

The proposed quotas, which will now be subject to notice and comment, reduce by 10 percent the pharmaceutical production of opioids commonly used by doctors. The same production levels were cut by 5 percent in 2018, and 35 percent in 2017, resulting in a cumulative reduction of 44 percent between 2016 and 2019.

The DEA has statutory authority to set nationwide production levels for controlled substances. Pursuant to this power, it will seek cuts in the production levels for six major opioids, including the powerful painkiller fentanyl. Fentanyl, which is prescribed primarily to cancer patients for whom other opioids are insufficient, was responsible for nearly 30,000 deaths in 2017. These deaths were primarily due to Chinese-produced illicit fentanyl, rather than domestically-produced and subsequently diverted fentanyl.

The reductions in opioid production are in response to President Trump's "Safer Prescribing Plan." Proposed in March, the plan sets a goal of reducing nationwide opioid prescription fills by one-third within three years.

"We've lost too many lives to the opioid epidemic and families and communities suffer tragic consequences every day," said DEA Acting Administrator Uttam Dhillon on Monday. "This significant drop in prescriptions by doctors and DEA's production quota adjustment will continue to reduce the amount of drugs available for illicit diversion and abuse while ensuring that patients will continue to have access to proper medicine."

While the Safer Prescribing Plan's goal is aggressive, it is unclear how effective it will be from a policy perspective. The number of prescriptions issued for medical opioid has been falling steadily since 2012, according to the most-recent data available from the Center for Disease Control.

In the same period of time, the rate of overdose death from prescription opioids has risen steadily, although the latest data, for 2017, indicate that it may finally have begun to plateau. 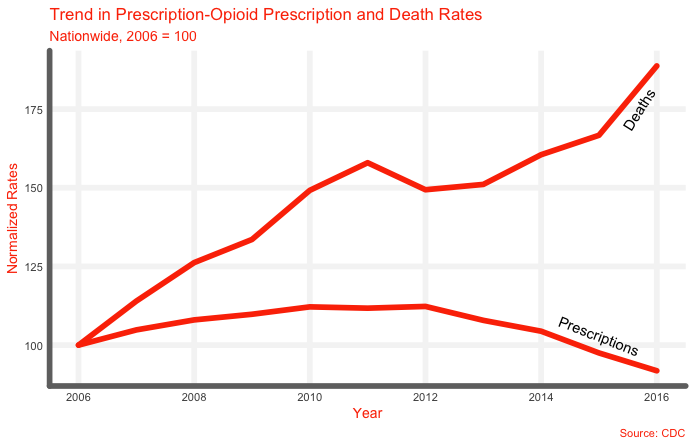 The results are only a little more promising when looking at state-by-state data. There is a weak but positive relationship between the rate of opioid prescriptions in a given state/year and the rate of prescription opioid overdose deaths. (Whether or not the relationship is statistically significant depends on how you look at it.) Analysis indicates that one fewer opioid prescription per 100 people means approximately 0.04 fewer deaths per 100,000 people. 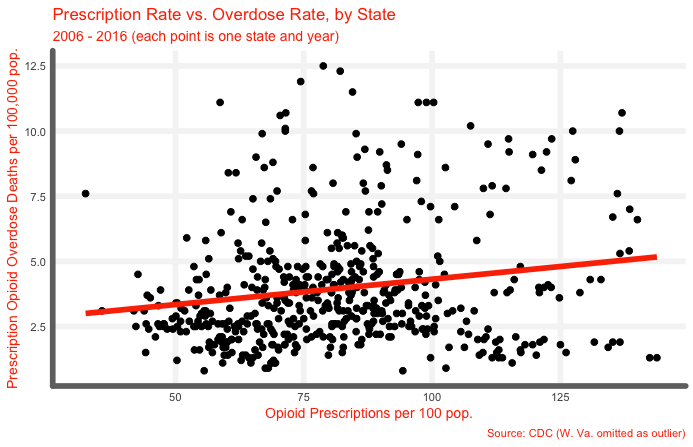 The weakness of this relationship—minimal, even if positive—combined with the fact that prescription opioid deaths do not seem to be falling, suggests that cutting the number of drugs may not be the best policy response to the drug epidemic.

It may even be the case that making it harder to acquire prescription opioids drives users to harder drugs like heroin and fentanyl. Some research suggests that Prescription Drug Monitoring Programs, which track opioid prescriptions at the state level and reduce prescription rates, increase the number of heroin users and the amount of heroin crime. And a group of economists have documented how Purdue Pharma's reformulation of OxyContin to make it tamper-proof is directly tied to a spike in heroin overdose deaths in 2010.

At the same time, reducing the volume of prescription opioids may unintentionally harm those the drugs most help. Chronic pain sufferers have reported that increasing suspicion of doctors has caused their prescribers to cut off access, leaving patients in agony.

Flight of the Superpower