Liberals twice as likely as conservatives to say protests are justified

A majority of young, college-educated Americans justify the rioting and looting destroying major urban areas across the country, according to a new poll.

Similar results were found among college-educated Americans, with 58 percent of college graduates saying the actions of the protesters are justified. Both the young and college-educated were the most likely to express favorability toward the riots and looting going on in major urban areas. Protests also found their strongest support among wealthier Americans—37 percent of those with reported incomes of more than $100,000 said the actions of the protesters were not justified compared with 39 percent of those earning less than $50,000.

As riots took place in the wake of the death of George Floyd, President Trump accused the "anti-fascist" group commonly dubbed "Antifa" of overshadowing the efforts of peaceful protesters with destructive violence. On May 31, Trump designated Antifa as a domestic terrorist group.

The poll also revealed a sharp partisan divide in the response to the demonstrations. While previous polls found that a sizable majority of Republicans—68 percent—supported the arrest of Minneapolis police officer Derek Chauvin, conservatives view the riots in a largely unfavorable light, according to Monmouth. Just 35 percent of conservatives say the riots are justifiable, while liberals at 72 percent were more than twice as likely to condone such behavior. 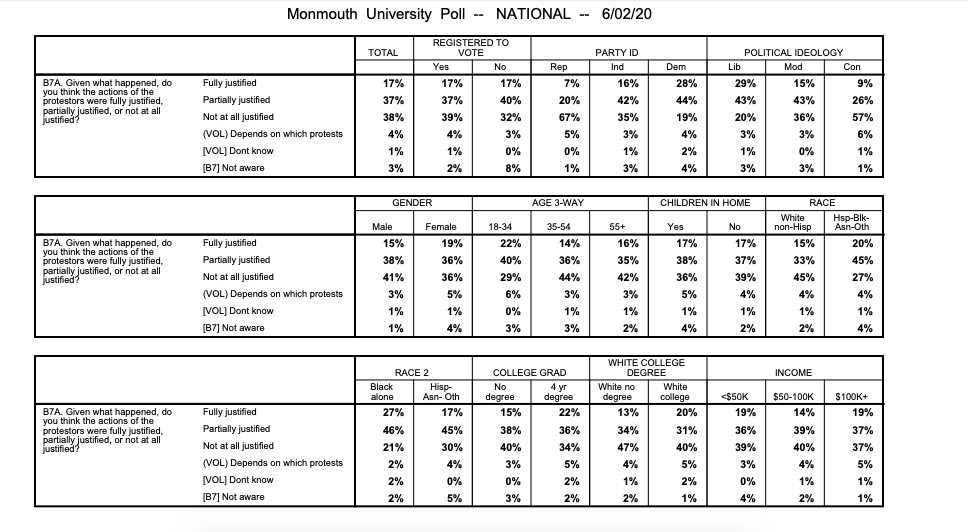 The partisan divide in how riots are regarded is evident in the political response to Antifa, and the question of whether the group should be deemed a terrorist organization. Antifa is a left-wing political movement comprising a loose network of groups known for engaging in violence at protests and clashes with right-wing demonstrators, with the ostensible objective of aggressively combating fascism. Some Democrats have expressed solidarity with the group. Justin Brannan, a New York City Democratic city council member, tweeted his support for Antifa, saying the group "simply means anti-fascist. If you are anti-Antifa that means you’re pro-fascist. Good luck with that."

.@NYCCouncil member, @JustinBrannan, what is your relationship with firebombing terror suspect Urooj Rahman? You've deleted your tweets interacting with her. And have been deleting your tweets defending antifa, too. https://t.co/C6jx9idfl7 pic.twitter.com/tgVhmjKwj1

In protests past, the group targeted an elderly couple, calling them "Nazi scum," and attacked members of the media for covering its "rallies." In 2019, journalist Andy Ngo was hospitalized for a brain hemorrhage after Antifa members attacked him for covering a Portland gathering.

The Monmouth poll was conducted between May 28 and June 1, as violence and looting tore through dozens of American cities with multiple casualties and deaths among both police officers and civilians.