North Dakota one of the most economically successful states

The state at the center of the American shale oil boom hit a huge milestone in April: for the first time, North Dakota produced an average 1 million barrels of oil per day.

The American Enterprise Institute’s Mark Perry charted the rise of the oil sector in "Saudi Dakota," driven almost entirely by production in the Bakken shale formation. 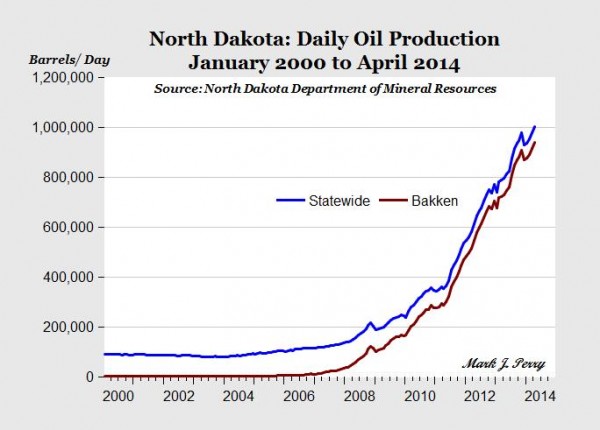 Perry analyzed the data and its broader trends for North Dakota’s economy:

April was another banner month in "Saudi Dakota," with average daily oil production surpassing one million bpd for the first time and setting a new all-time monthly record for the state’s average daily oil output. Within a few months, the Bakken oil fields in the western part of the state will join an elite group of only ten oil fields in the world to ever surpass the million-barrel milestone for peak daily crude oil production.

The shale boom continues to make the Peace Garden State America’s most economically successful state – with growth in employment and personal income that lead the nation, the lowest state jobless rate in the country at 2.6 percent in April (and the lowest monthly jobless rate in North Dakota history), an enviable and whopping state budget surplus approaching $2 billion, the highest state GDP growth in 2013 of 9.7 percent, strong housing and construction markets (almost 9,000 permits were issued last year which is an all-time record and more than 3 times the permits issued four years ago in 2009), thousands of landowners who have become millionaires from oil and gas royalties (estimated oil royalty payments of more than $20 million every day in April, at 20 percent of the approximately $102 million in market value calculated above; and an estimated additional $700,000 in payments every day for natural gas royalties), and jobless rates in 17 of the state’s 53 counties at 2.5 percent or lower in August (with Williams County at only 0.90 percent, the lowest county jobless rate in America).