The chart Velshi referenced is titled, "Allocation of Changes in Net Federal Revenues and Spending Under the Tax Cuts and Jobs Act." It denotes at the top that all figures are in millions of dollars.

On the left is a column titled, "Income Category," and shows several different income ranges. The columns are divided into year categories, featuring four-digit figures (in millions). Velshi claimed these numbers indicated what an individual in a given income range would pay under the Republican tax plan. 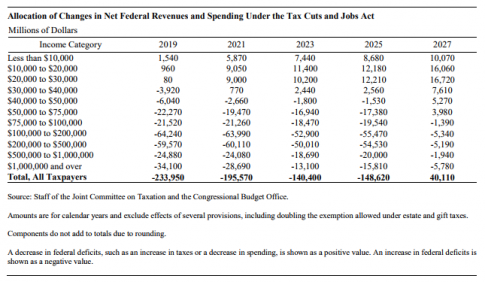 "President Trump is promoting the bill on Twitter, claiming that he's got ‘great support,’ but he acknowledges a few changes," Velshi said. "That's because of more bad news from the Congressional Budget Office showing that by 2021, people making less than $30,000 a year are going to pay between $5,000 and $9,000 more in taxes. By 2027, those folks could see an increase of up to $16,000 in their taxes."

The chart is not, as Velshi claims, a hard dollar estimate of the increase or decrease in an individual's tax payment. Rather, the chart displays estimates of the cumulative revenue the federal government will reap (in millions of dollars) from all individuals in the highlighted income brackets compared to current rates.

The accurate interpretation of the chart would be that, in 2021, the federal government will receive a collective increase in revenue of $9 billion from individuals in the $20,000 to $30,000 income bracket.

The CBO's chart that Velshi uses is found in a cost estimate document that explains the chart's values.

"The combined distributional effect of the provisions estimated by JCT and CBO, thus representing the total distributional effect of the bill, was calculated by subtracting the estimated change in federal spending from the change in federal revenues allocated to each income group," the CBO document explains. "The resulting changes in the federal deficit allocated to each income group are reflected in the following table."

Velshi's biography on MSNBC's website says he is "an MSNBC Anchor and Business Correspondent for NBC News and MSNBC."