A two-decades-old battle between a Nevada rancher and the Bureau of Land Management (BLM) has resulted in officials armed with machine guns surrounding the ranch and forcibly removing the owner’s cattle, according to the rancher’s family.

Cliven Bundy, the last rancher in Clark County, Nev., has been fighting a "one-man range war" since 1993, when he decided to take a stand against the agency, refusing to pay fees for the right to graze on a ranch run by his family for centuries.

After years of court battles, the BLM secured a federal court order to have Bundy’s "trespass cattle" forcibly removed with heavy artillery, the family said.

Bundy said the government has brought everything but tanks and rocket launchers. 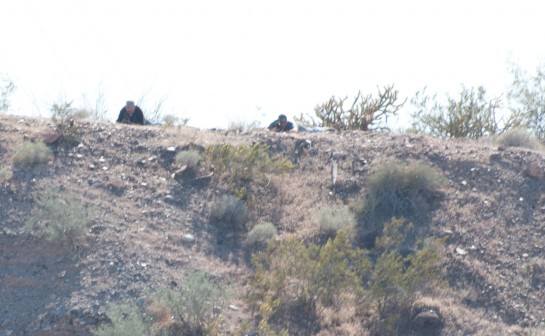 Armed men outside the Bundy ranch / Cliven and Carol Bundy

His wife, Carol Bundy, said that roughly 200 armed agents from the BLM and FBI are stationed around their land, located about 75 miles outside of Las Vegas. Helicopters circle the premises, and the airspace and nearby roads remain blocked.

"We’re surrounded," Carol Bundy said. "We’re estimating that there are over 200 armed BLM, FBI. We’ve got surveillance cameras at our house, they’re probably listening to me talk to you right now."

A National Park Service spokesman denied there were armed guards rounding up the cattle in a conference call on Tuesday. However, she confirmed that there was "security" in place, citing threats to the contractors who are removing the cattle.

"Contractors are here and they are in place to round-up the cattle and to bring them to the impound area," Christie Vanover said. "As for security, there [is] security in place, but that is merely to protect the contractors."

As of Monday, officials have seized 234 of Bundy’s 908 cattle. Impounding the cattle alone could cost the government as much as $3 million.

"They just brought a load down today," she said. "They kind of harass us as well. When we leave they follow us."

This afternoon eight helicopters surrounded the family after they began taking pictures, according to Bundy’s daughter, Bailey. Their son, Dave Bundy, was arrested for taking pictures on state road 170, which has been closed, and is being held by BLM. 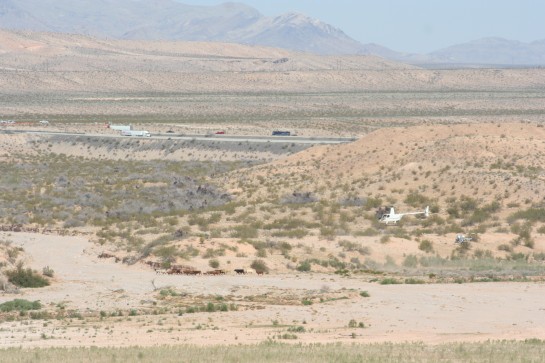 The BLM said they took Dave Bundy into custody following his "failure to comply with multiple requests by BLM law enforcement to leave the temporary closure area on public lands."

Carol Bundy said five officials took Dave and "threw him on the ground."

"One put his knee on his head, the other put his boot on his head and pushed him into the gravel," she said. "He’s got quite a bruised head. Just bruised him up pretty good."

Environmentalists are praising the government’s forceful actions, which are being taken to protect the "desert tortoise."

"We’re heartened and thankful that the agencies are finally living up to their stewardship duty," said Rob Mrowka, a Nevada-based senior scientist with the Center for Biological Diversity. "The Gold Butte area has been officially designated as critical habitat for threatened tortoises—meaning the area is essential to their long-term survival as a species."

The BLM designated 186,909 acres of the Gold Butte off-limits for the "critical desert tortoise" population in 1998. Bundy had already lost his grazing permit five years earlier for refusing to pay fees for the land, which his family has ranched since the 1870s.

The "federal grazing fee" is $1.35 per "Animal Unit Month," or the amount of forage needed per animal, each month. Bundy said he owes roughly $300,000 in back fees, while the BLM asserts he owes over $1 million. The BLM defended the removal because Bundy did not "voluntarily" give up his cattle.

"We’ve tried to do this through the legal and we’ve tried to do it through the political, and what we’re at right now, I guess we’re going to have to try to stand," Cliven Bundy said. "We the people have to stand on the ground and get our state sovereignty back, and also take some liberty and freedoms back to where we have at least access to this land."

"The story is a lot about the cattle, but the bigger story is about our loss of freedom," Carol Bundy added. "They have come and taken over this whole corner of the county. They’ve taken over policing power, they’ve taken over our freedom, and they’re stealing cattle."

"I’m a producer," Cliven Bundy said. "I produce edible commodity from the desert forage, and all of these things are governed under state law. So, in other words, this type of government has eliminated all of our state law, eliminated our state sovereignty, and has took control over our public lands and even took control over our Clark County sheriff. They’ve taken the whole county over. The whole state, almost."

"This is just about power of the government," Carol Bundy said.

Nevada Gov. Brian Sandoval (R.) voiced his concern about so-called "First Amendment Areas," designated locations set up by the BLM where citizens can protest the removal.

"Most disturbing to me is the BLM’s establishment of a ‘First Amendment Area’ that tramples upon Nevadans’ fundamental rights under the U.S. Constitution," he said in a statement Tuesday.

"To that end, I have advised the BLM that such conduct is offensive to me and countless others and that the ‘First Amendment Area’ should be dismantled immediately," he said.  "No cow justifies the atmosphere of intimidation which currently exists nor the limitation of constitutional rights that are sacred to all Nevadans.  The BLM needs to reconsider its approach to this matter and act accordingly."

Sandoval also said his office has received numerous complaints about the BLM’s conduct, including road closures and "other disturbances."