Rep. Keith Ellison (D., Minn.) during a 2008 trip to Saudi Arabia met with a radical Muslim cleric who endorsed killing U.S. soldiers and with the president of a bank used to pay the families of Palestinian suicide bombers.

Ellison, now a leading candidate to head the Democratic National Committee, was brought to Saudi Arabia for a two-week trip by the Muslim American Society (MAS), a group founded by members of the Muslim Brotherhood to act as its "overt arm" in the United States.

Details of Ellison's religious pilgrimage to Saudi Arabia are scarce, but photographs discovered by the Washington Free Beacon show that Ellison met with controversial figures during the trip.

A photo album of Ellison's hajj trip posted by MAS's Minnesota chapter includes a picture of the congressman meeting with Sheikh Abdallah Bin Bayyah, who was vice president of a Muslim Brotherhood-created group that in 2004 issued a fatwa urging "jihad" against U.S. troops in Iraq and supported the Palestinians' Second Intifada against Israel. 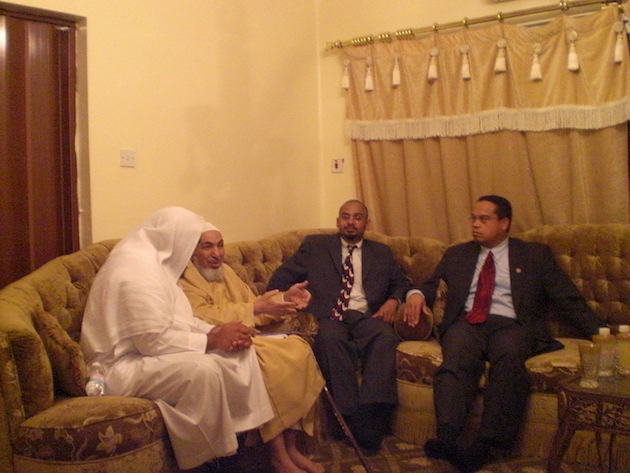 "The Jihad-waging Iraqi people's resistance to the foreign occupation … is a Shari'a duty incumbent upon anyone belonging to the Muslim nation," the fatwa said, according to a translation by the Middle East Media Research Institute.

Bin Bayyah's group, the International Association of Muslim Scholars, issued the fatwa after a conference in Beirut, Lebanon.

The group was founded by Yusuf Qaradawi, a Muslim Brotherhood leader who was banned from visiting the United States because of his calls to kill Jews and Americans.

Bin Biyyah issued an additional fatwa in 2009, shortly after his meeting with Ellison, "barring all forms of normalization with Israel."

Ellison also took time on his trip to meet with Dr. Ahmad Mohamed Ali, the president of a Saudi Arabia-based bank that funnels millions of dollars to the families of Palestinian suicide bombers in Israel.

Ali's bank, the Islamic Development Bank, maintains the Al-Quds Intifada Fund and the Al-Aqsa Fund, which were established in 2000 to fund Palestinian terrorism and provide money to the families of Palestinian "martyrs." The funds were established with an initial investment of $200 million.

Ali said his bank—which is referred to as the "Bank of the Intifada" by Anne Bayefsky, director of the Touro College Institute on Human Rights and the Holocaust—is responsible "for the smooth functioning of the two funds" and that there is "no delay" in paying families of "martyrs."

"There was no delay in paying financial assistance to the families of Palestinian martyrs," Ali said in 2001. "We have started paying them soon after receiving the money."

Ellison's congressional office has not responded to numerous requests for comment on his trip.

Ellison told congressional investigators on the House Ethics Committee that he did not have any "meetings of an official nature" on his trip and "instead undertook only the more personal itinerary scheduled by the Muslim American Society."

Photos from the trip show Ellison attended several meetings, but the Free Beacon was unable to identify any participants besides Bin Bayyah and Ali.

"The notion that a sitting congressman would meet with a man whose organization only four years earlier had issued a fatwa calling for fighting Americans in Iraq once again illustrates the truly outrageous depth of Rep. Ellison's affiliation with Islamist groups," Shideler said.

Shideler questioned whether the meetings would cause top Democrats to think twice about supporting Ellison's campaign for DNC chairman.

"One would think at some point Democratic party leaders, many of whom are on record as personal supporters of Israel, are going to need to raise the question of whether Ellison's views are in step with the party's view," he said.