The Institute for Historical Review, a major outlet for Holocaust denial, placed an ad on the website of the Yale Daily News, the nation's oldest college newspaper.

The banner ad was still available Friday afternoon, at least two days after the ad was first posted. The ad linked to the IHR's website, as well as the slogan, "for a more just, sane and peaceful world." 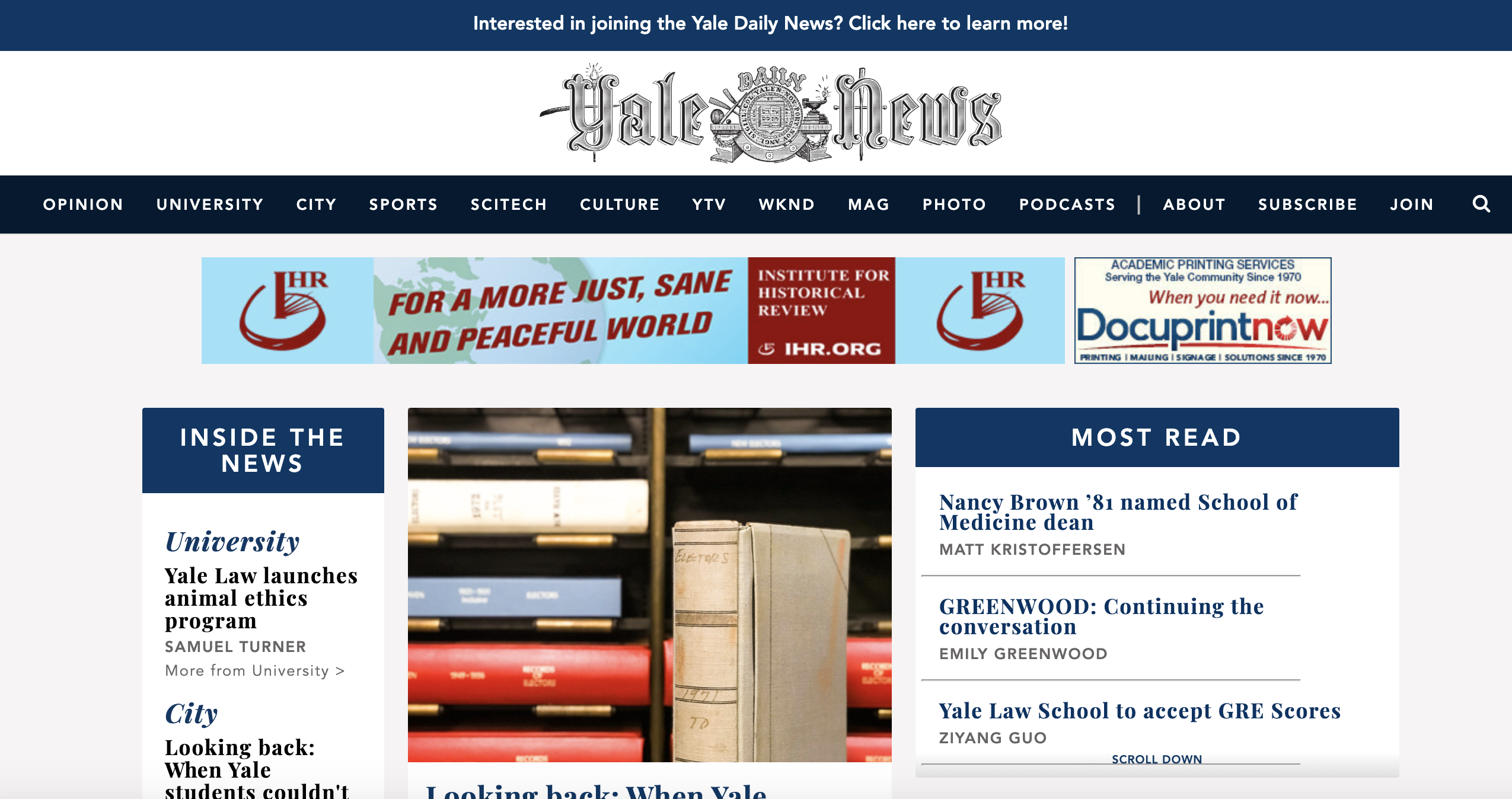 According to the Southern Poverty Law Center, the IHR is a "pseudo-academic organization that claims to seek ‘truth and accuracy in history,' but whose real purpose is to promote Holocaust denial and defend Nazism." Founded in 1978 by Willis Carto—whom the Anti-Defamation League  called "one of the most virulent anti-Semitic propagandists in the United States"—the IHR has historically held conferences centered around denying the extent and even existence of the Holocaust. Today, according to the SPLC, it primarily operates its website and distributes "extremist books."

The IHR's website—to which the ad redirects—features articles with titles such as "Top Ten Things the Nazis Got Right," "Biden Acknowledges ‘Immense' Jewish Role in American Cultural Life and Mass Media," and information about British fascist Sir Oswald Mosley.

The IHR touted the advertisement on its own website. A Wednesday posting said that "A banner display ad of the Institute for Historical Review is appearing on the website of the Yale Daily News, the student newspaper of Yale University. The public service advertisement began appearing this morning, and is set to remain in place for a week. A viewer who clicks on the ad is taken to the home page of the IHR website."

This is not the first time in recent years that the group has placed advertisements publicly. In 2018, citing free speech requirements, the Bay Area Rapid Transit (BART) system permitted the IHR to advertise at two stations.

The News, founded in 1878, bills itself as "the nation's oldest college newspaper." It serves the students and faculty of Yale University, as well as New Haven, Conn. The paper is operated by students on a volunteer basis, but retains a full-time general manager of its business office, which is responsible for the outlet's advertising.

Phone and email requests for comment directed to the editor, publisher, and business office of the Yale Daily News went unanswered at press time.

The IHR's Yale incursion may reflect growing anti-Semitism on campuses more broadly. According to a recent report from campus anti-Semitism watchdog the AMCHA Initiative, harassment of students who expressed pro-Israel ideologies rose an estimated 70 percent between 2017 and 2018.