‘Free Beacon’ Banned From Stand with the Prophet Event

GARLAND, Texas — A Free Beacon reporter was barred from attending on Saturday the controversial Stand with the Prophet in Honor and Respect rally, an evening-long forum organized by American Muslim leaders to oppose what they claim are American Islamophobes who are giving the Islamic faith a bad name.

An event organizer claimed that while some media outlets had been permitted to cover the event, the Free Beacon was not approved to attend and would not be permitted into the event, which was billed by organizers as a "movement to defend Prophet Muhammad, his person, and his message."

Keynote speakers at the event were scheduled to include Siraj Wahhaj, an unindicted co-conspirator in the 1993 World Trade Center bombings trial, and Georgetown University professor John Esposito, founding director of the school’s Prince Alwaleed Bin Talal Center for Muslim-Christian Understanding, which has come under fire for, among other things, hosting 9/11 Truthers and a member of Egypt’s Nazi Party.

The forum garnered national headlines and attention after a Free Beacon report last week and came in the wake of terrorist attacks by Islamists in Paris killed 17 people, including Jews and staffers of satirical French magazine Charlie Hebdo.

Several reporters who turned up to cover the event, including one from Fox News, also were denied access, despite having registered in advance with organizer SoundVision, an Illinois-based website that provides advice and products to Muslims.

Citing space constraints and a potential "fire hazard," one unnamed event representative declined to provide specific information about why the Free Beacon would not be permitted to enter the Curtis Culwell Center, a taxpayer-funded event center owned by the Garland Independent School District.

When pressed to explain this decision, the organizer said his comments were off the record and then told a nearby police officer that he was "done" speaking to a reporter. The officer then herded the Free Beacon back into a media holding area that had been established in the parking lot.

Later in the afternoon, a representative from the Center on American-Islamic Relations (CAIR) came to the press area and told several reporters attempting to cover the event that, "If you filled out a press [form], then they'll let you in."

However, the Free Beacon was informed just a short time later by the CAIR representative, who said the group was not responsible for organizing the event, that its reporter would not be permitted to cover the evening-long forum.

"People we're not allowing in are not going on in," said one event organizer who declined to provide a name.

An email to SoundVision seeking explanation was not immediately returned.

The reporters actually granted access to the event were only permitted to cover the first 20 minutes before being asked to leave.

Two reporters from Alex Jones's Infowars website were able to attend the event, and told the Free Beacon as they left that they were made to sign a consent form ensuring they would not record anything they saw at the conference.

Reporters from The Blaze and some local television channels also were permitted to cover the first 20 minutes of the event before being forced to leave.

Roughly 500 protesters, some of whom circled the streets around the center on their motorcycles, turned out to hold a protest of the event.

Holding signs that read, "Protect our kids from Islam" and "You have entered a Sharia-free zone," the demonstrators—including one dressed as Uncle Sam—said they organized in order to defend free speech and the rights of news outlets and others to skewer Islam.

The Stand with the Prophet rally's organizers blamed Islam’s bad reputation on the media and so-called American Islamophobes who have "invested at least $160 million dollars to attack our Prophet and Islam," according to the conference webpage. They say their conference is about defending the Islamic prophet Muhammad from attacks by these groups.

"This is not an event. It is the beginning of a movement," organizers wrote on their website, which blames Americans for giving Islam a bad name.

Police in the area were on high alert and erected barricades to prevent protesters from getting too close to the conference center.

Police began monitoring demonstrators online about a week before the event to gauge necessary security measures, one police official told the Free Beacon.

Local cops were concerned about the safety of Wahhaj, whose presence at the event sparked particular outrage among the protesters, the official said.

Alan Kornman and Damon Rosen, both reporters with the United West, said they were ticketed for the event but then barred from entering because they were Jewish.

"Why can't I come in?" Rosen shouted at attendees attempting to make their way into the event center. "Is it because I'm a Jew? … I'm a Jew with a ticket who can't come in."

Sparks also flew between protesters and some others who had gathered to express solidarity with those participating in the event.

"Get the fuck out of here," screamed one man as he drove by a group of about 70 people expressing solidarity with the event.

"You ought to be ashamed of yourself," yelled another.

Other protesters expressed anger that their tax dollars were being spent to fund the Culwell Center.

"My tax dollars are being used for the Imam [Wahhaj]," said one man who identified himself as James and cited the Free Beacon‘s original report as part of the reason why he decided to protest. "I'm incensed. I could not not come out here to protest."

James said that people of all religions have a right to peacefully assemble, but that the presence of Wahhaj and Georgetown's Esposito was offensive to him.

"They messed up by inviting these certain people," he said. "In this climate, they should have cancelled it."

"I’m mad they're using a government facility to hold this," added a man who identified himself as Mike. "I'm worried."

Another attendee, John Robertson, a Rockwall, Texa,s resident, invited a Free Beacon reporter to join him in the bed of his pick-up truck, which was draped in an Israeli flag. 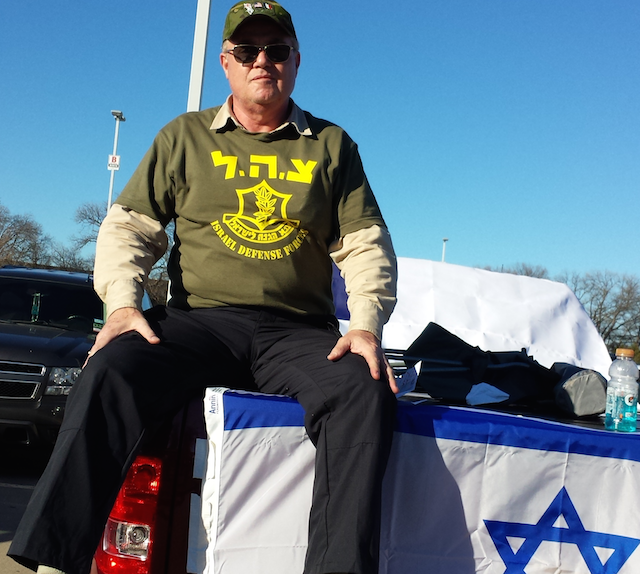 "Pride for America and my love for fellow man" motivated Robertson to attend the protest, he said. "This is a free protest for everyone."

Robertson, who was wearing an Israeli Defense Forces (IDF) t-shirt, said that some people drove down the road nearby the protesters and shouted out of their windows, "You racist motherfuckers!"

But, to him, the protest was about unity.

"I wanna show my support for Israel, Christianity, and to be a decent human being," Robertson said as one man walked by his pick-up truck shouting, "God bless America! God bless Israel!"

Bikers also were well represented at the protest.

One leather-vest-sporting motorcycle enthusiast who identified himself as "Crazy" joked that he had shown up, "because we love the Islamists."

"We don't have a problem with them practicing their religion," Crazy added. But, "I'm going to stand here and eat a pork sandwich," he said, an apparent reference to Islam's religious ban on consuming pork products.

On the other side of the street near the Culwell Center, counter-protesters expressing solidarity with the Stand with the Prophet event—including several men and women sporting Che Guevara t-shirts—said that they felt intimated by the pro-American protesters.

"I see a lot of hate," said one woman who identified herself as Susan and reported that she was feeling so emotional she might cry.

"I've been shocked at the behavior of Christian people waving flags," Susan said.

Another counter-protester, Laila, lofted a large American flag and said she was "standing up for our rights as American citizens."

Laila, a convert to Islam who wore a head cover, said she felt sorry for those who came to protest against the conference.

"It's what is distracting us from national issues that are really important."