Hundreds thronged around the line of marching veterans. Little girls gave them red poppy flowers, while others cheered and shook their weathered hands. "Thank you for your service" was said over and over and over.

The group of 100 veterans entered the round courtyard of the World War II Memorial through an archway with bronze eagles overhead, the cheers of the crowd echoing outside. They gazed out on the two sets of stone pillars surrounding a fountain as a hot May sun beat down on them.

"Awesome," said one veteran, likely in his 80s, as he looked around.

The World War II Memorial was built to commemorate those who served in that war, but it is increasingly standing in testament to a bygone generation—and a generation that, in many cases, did not get to see the memorial honoring their sacrifices in that war.

Giving them the chance to see their memorial is the purpose of every Honor Flight. Each trip brings elderly veterans from across the country to see the war memorials dotting Washington, D.C. It is an opportunity that they likely would not have otherwise. 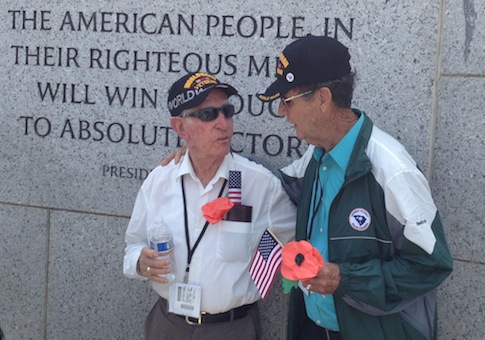 The veterans on this trip, which took place on Wednesday, were part of an Honor Flight from Columbia, S.C. A middle school class visiting Washington and volunteers from the local power company lined the entrance and gave them a hero’s welcome as they entered the World War II Memorial on the national mall.

The World War II Memorial’s dedication inspired the first Honor Flight in 2005 after a Veterans Affairs doctor arranged for several of his elderly patients to fly down to Washington to see it. And most Honor Flight hubs—well over 100 in 40 states—still primarily serve World War II veterans, giving them one final chance to visit the memorial to their service.

Time is against them. The national Honor Flight organization estimates that over 800 are dying every day. Indeed, only about a quarter of the veterans on the trip actually served during the war, while the rest served in Korea.

The memorial sits between the Washington Monument and the Lincoln Memorial. Two gateway arches, representing the Atlantic and Pacific theaters of the war, stand at either end, while two sets of stone columns fan out on either side of gates. A large fountain spouts water in the middle.

Johnny Raines, a former Army infantryman and paratrooper, embodied patriotism and pride in the military. A tall Cherokee Indian, Raines joined the military when he was 16 after being drafted. He lied about his age to get a job, and the military shipped him off to the Philippines, where he took shrapnel in his face. He later served in Korea.

Raines talks a lot at home about the military, his daughter Jackie said, especially with his friends. Raines described himself as a "hardcore soldier" because of his fighting prowess. Soldiers today, he said, "couldn’t fight their way out of a paper bag."

"He was hardcore. He’s still hardcore," he daughter Jackie said.

Raines recounted his time in the Philippines when, scared to death, he was sent out to cover a gap. He fired on some "imps," Imperial Japanese army, who then returned fire, blowing up his gun and injuring him.

As I was talking to Raines in the bus, he would quickly move from reminiscing about the military to commenting on the country’s current state. He clearly loved America, but he was sad to see the direction it was heading.

"I feel sorry for people like you … because you’ve got a long life ahead of you," he told me.

He most lamented the polarization in Washington—a point he would often repeat to me when I saw him throughout the day.

"This country is divided," he would say, before laying into the Democrats and Republicans, and most of all President Barak Obama, for the intractable political process in the nation’s capital.

One of the few veterans on the trip who served in World War II, Raines was still walking well and rarely needed assistance. The same could not be said of all the other veterans. 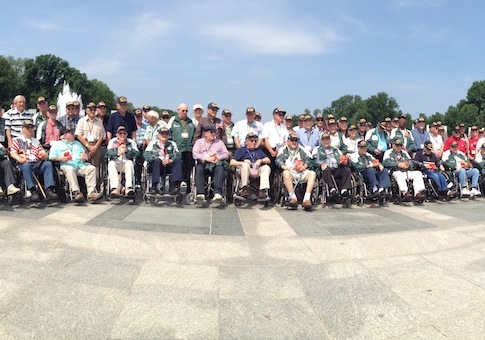 Many soldiers were too weak to walk long distances, and at least a quarter were in wheelchairs. One trip leader called out to the "guardians" accompanying the veterans: "Be sure they have plenty of water."

As the number of World War II veterans diminishes, the culture surrounding them is diminishing as well.

When I asked them why they went in, I often heard something like, "It was just what you did." Part of this culture was formed by the draft—nine percent of Americans served in uniform in World War II, compared to one percent today.

But there was a modesty among the veterans. After entering the airport in Washington to the cheers of assembled travelers, one veteran remarked, "We don’t deserve it."

Why not? "Everybody who lives in America loves America," he said.

Raines was similarly modest. Despite loving his time in the military, he did not tell his family about his medals that he earned—two Purple Hearts, a Silver Star, and five Bronze Stars. In fact, he did not even have the medals at home; when Jackie corrected his age in the military’s files, they sent him all the medals.

When I asked him why he did not tell his family about the medals, Raines demurred. "Well, I don’t know. I was a soldier."

Many World War II veterans had very strong senses of duty and morality. Kim Sample, a guardian on the flight, told me about her father, Walter Myers, who died in 2011 before he could make it to the memorial.

Myers grew up on a farm in rural South Carolina and, like Raines, dropped out of high school in order to support his family. "I know you’re 16, but you’re the man of the house," Sample said, describing her father’s mindset.

"He had a black and white world—very little gray," she said about him. He had a strong sense for the proper roles of men and women, and once he came to a judgment about something, he would not change his mind, Sample said.

"Talkin’ ‘bout daddy’s easy," she said, with obvious pride in her voice.

Sample was there to honor her late father, the same reason that Terry Pound, the trip organizer, decided to start organizing Honor Flights out of South Carolina.

"Every time I call a veteran on the phone to see if he wants to go and he says yes, I can see my dad smiling," Pound said. Like Myers, Pound’s father was not able to go on the trip, and Pound decided to get involved after he died.

The honor paid to the men (and one woman) came as much in the little details as in the grandeur of the moment. The plane, a chartered jet from US Airways, played music from the 1940s over the intercom system in the cabin. When they arrived back at the airport to return to Columbia, a jazz trio played vintage tunes while a swing dance group convinced some veterans to dance. Even the snacks had notes stuck to them thanking the veterans for their service.

The final honor came at the end, when the veterans marched into the airport atrium. Hundreds of people from the community cheered, thanking the veterans and shaking their hands as they marched down the center aisle. A military band played patriotic songs, a final honor on the veterans’ last flight.

"It makes me feel good inside, that people still care," said hardcore Johnny Raines, choking up.