Economy Not Keeping Up With Population Growth

8 million added to working population, half a million fewer jobs

Despite adding more than 8 million people to the working-age population since 2007, total employment has declined by half a million, according to an analysis by the Senate Budget Committee.

Before President Barack Obama took office 259.7 million people were part of the working-age population, or between ages 16 and 65.  Now, the number has risen to 267.7 million. 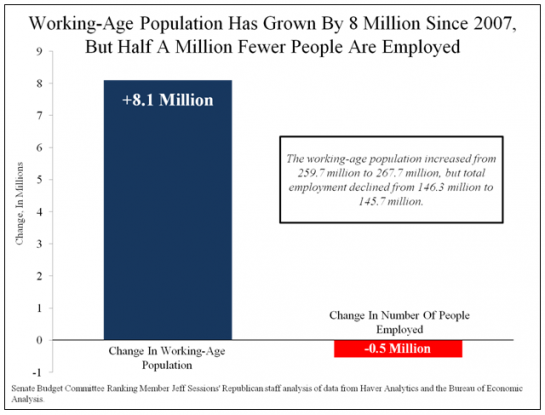 'This statistic highlights an alarming trend that has embodied the president’s economic policies: more and more people are leaving the workforce entirely," according to the analysis, which was released by Ranking Member of the Senate Budget Committee Jeff Sessions (R., Ala.). 'There are 58 million working-age people who are not working, and the labor force participation rate stands at 62.8 percent, the lowest level in 36 years."

In defining the pool of potential workers, the Bureau of Labor Statistics (BLS) includes anyone over 16, excluding inmates in penal and mental facilities, and active duty members of the Armed Forces.

For their analysis, the Budget Committee compared Labor Department and Commerce Department data to manually exclude persons over 65.  The analysis of the working-age population, which totals 267.7 million, therefore, includes everyone between the ages of 16 and 65, including individuals who are students, stay-at-home mothers, and others who choose not to work full-time.