A Democratic U.S. Senate candidate in Connecticut called one primary opponent a "whore" for his support of AIPAC, and another opponent ignorant during a Thursday debate.

LEE WHITNUM: I’m going to change my closing statement a little bit in response. You know, I’m appalled that when I talk about the neoconservatives somehow it’s supposed to be some sort of racist comment. This is documented fact: The neoconservative role in the taking down of Iraq, unnecessary war, is fact. It’s not opinion. I’m dealing with whore here, who sells his soul to AIPAC, who will say anything for the job. Ignorant, he—his response to what I said is just shocking. I’m speaking documented fact, and I’m [unclear] a zealot. I have a plan—what I’d like to propose is a prosecution of settlers here, American settlers who go to Israel and maim or kill in the promised land. Since 2000, 66,000 of the indigenous culture have been killed, many of them by American settlers. This is viewed all over the Middle East, and we are hated for this worldwide. By prosecuting people here who kill overseas, we would solve anti-American sentiment worldwide. This is the number one reason why people hate this country.

Politico's Maggie Haberman linked to this photo on Whitnum's website Thursday night, which shows Whitnum with then Sen. Chris Dodd during a J Street event in 2009: 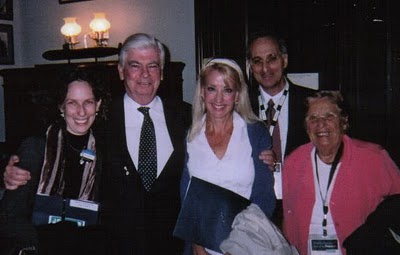