Deaths attributable to cocaine and methamphetamine rose significantly in 2017, and look to have continued to go up in 2018, a new report from the Centers for Disease Control shows.

Most of the added deaths, the report further shows, also involve opioids, casting light on the polydrug nature of America’s current drug crisis.

The lion’s share of these deaths, 42,000 or so, involved opioids. These deadly narcotics—including prescription pills, heroin, and the synthetic opioid fentanyl and its analogs—have as a result attracted the lion’s share of the headlines about the drug crisis. Coverage has spurred a preoccupation with prosecuting American pharmaceutical firms and targeting opioid use specifically, rather than a broader problem of drug use.

The new report from the CDC complicates the opioid-centric account popular in the media. It highlights that rates of overdose death involving cocaine and "psychostimulants," a category largely accounted for by methamphetamine, are still at lower levels than those involving opioids, but have risen with similar rapidity in recent years. In 2017, for example, 20 percent of drug deaths involved cocaine and 15 percent involved methamphetamine. 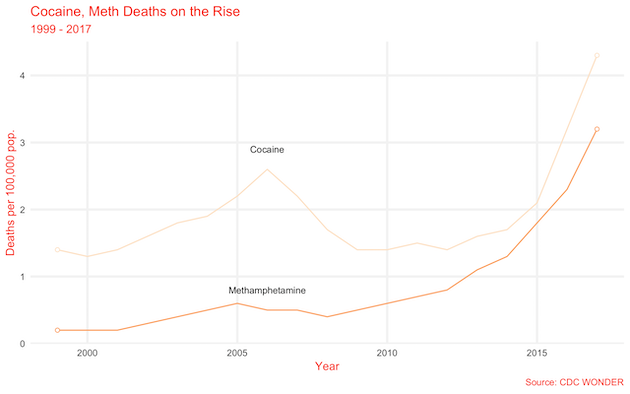 Although they show similar trends in overdose death rates, the two drugs exhibit different patterns of use. Seventy-three percent of cocaine deaths, the report noted, also involved opioids, likely indicating that cocaine is increasingly adulterated with fentanyl. Unlike opioids, however, cocaine-involved deaths are most common among African Americans, with the per-capita death rate among blacks more than twice the national average.

Methamphetamine overdose deaths also involved opioids in about half of cases. However, just as important to the story of meth deaths is rising availability of the drugs, fueled by Mexican drug cartels. The result, the report shows, is an increase in deaths predominantly among whites and Native Americans.

Although these two trends are cause for alarm in themselves, the report highlights that the latest figures capture a drug crisis in transition. What began two decades ago as a prescription opioid crisis now crosses substance lines, with users consuming multiple drugs at once, often without their knowledge.

"Drug overdoses continue to evolve along with emerging threats, changes in the drug supply, mixing of substances with or without the user’s knowledge, and polysubstance use," the authors explain.

A 2016 analysis from the CDC found that 48 percent of all drug overdose deaths in 2014 involved more than one drug; 11 percent involved four or more. It is likely that as fentanyl and other designer drugs have crept into the illicit supply, this figure has only increased.

"What’s killing these people is not just opioids. It’s opioids in combination with other drugs of abuse," Robert DuPont, former White House Drug Czar, said in a speech last year.

Full data are not yet available for 2018 and beyond. However, the CDC report indicates, it is likely that drug overdoses deaths continued to rise across drug categories.

"The rise in deaths involving cocaine and psychostimulants and the continuing evolution of the drug landscape indicate a need for a rapid, multifaceted, and broad approach that includes more timely and comprehensive surveillance efforts to inform tailored and effective prevention and response strategies," the report concludes.