Business owners, managers, and employees say they have seen revenues drop significantly this week, contrary to claims by city leaders in Cleveland, Ohio, that hosting the Republican National Convention would be an economic boon.

At the West Third Deli, manager Tesh Patel said his restaurant was only getting half of the regular amount of business. The reason: his regulars were gone.

A number of offices in downtown Cleveland have been closed during the convention, and many employees have been told to work from home. Security barriers have snarled traffic badly.

Expressing a common view among owners and managers, Patel said he was still happy to see Cleveland in the national spotlight, even though the convention crowds had not translated into business for his deli. Much of the deli’s business the past week has been members of the media and police, not convention-goers.

At Bank Street Wine & Spirits on Cleveland’s trendy West Sixth Street, manager Johny Youssef said that business was up 20 to 25 percent. While his off-the-shelf sales remained steady from regulars, nearby businesses that he supplies, including the JACK Casino, had purchased more alcohol due to delegates and members of the media hitting the bars.

Convenience store owner Ashwin Patel was having a rough week at his store, City News & Gift. Patel told the Washington Free Beacon that on Monday, the first day of the convention, he had sold only one bottle of Pepsi. As of lunchtime on Tuesday, he had only sold two.

"You see the newspapers?" Patel said gesturing to a shelf with various national publications. "One, one of these all day," Patel said as he held up a copy of the Wall Street Journal. Patel had ordered ten and had nine remaining.

At another nearby convenience store, Komal Patel, expressed her disappointment with city officials who she said overestimated the potential benefit that hosting the convention would bring.

Caroline Guscott, the Cleveland Museum of Art’s director of communications, told a Free Beacon reporter the museum has benefitted from a "modest" uptick in attendance since the convention came to town. She emphasized that the museum is only a short distance away from the convention site and welcomes convention attendees. 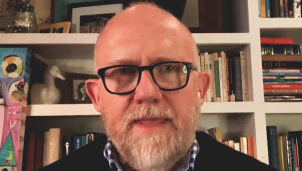