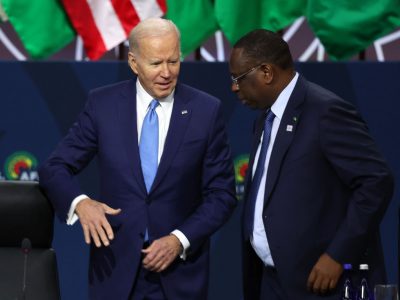 U2 lead singer and philanthropist Bono praised former President George W. Bush on Tuesday for his initiative to fight the global HIV/AIDS epidemic and save the lives of those suffering from the disease, particularly in Africa, hailing the effort as an "amazing " success.

Bono appeared on MSNBC’s Morning Joe to discuss his recent trip to the Middle East and East Africa to visit refugee camps full of people who escaped the Syrian civil war and from other collapsing states. He said the current refugee crisis poses an "existential threat" to Europe and called on the United States and other countries to provide more aid for both humanitarian and national security reasons.

As the interview was ending, Bono asked to say one final thing to Nicolle Wallace because she worked for Bush as his communications chief.

"Can I just say one thing?" Bono asked. "Actually, it’s to Nicolle, and it’s just, she knows because she worked for President Bush. The American people have done this before. They’ve taken on really impossible tasks and succeeded. And the battle in the fight against AIDS was won successfully. It’s an amazing thing. America leads the world in the fight against AIDS. Nearly 10 million lives are owed to America. So you can do it. It’s difficult stuff, but you’re up to the job."

Bono was referring to the President’s Emergency Plan for AIDS Relief (PEPFAR), which Bush launched during his presidency to save the lives of those suffering from HIV/AIDS around the world. In July 2008, Bush signed a bill to renew PEPFAR and authorized up to $48 billion over the next five years to fight HIV/AIDS, tuberculosis, and malaria.

The initiative is still active today and has mainly focused on Africa, which has undergone a major AIDS epidemic in recent years. The program has been widely praised by both Democrats and Republicans for successfully combating the disease and saving millions of lives.

Bono, who founded the advocacy group ONE and the AIDS organization (RED), will testify Tuesday afternoon before the Senate Appropriations Subcommittee on State, Foreign Operations, and Related Programs to discuss violent extremism and the role of foreign assistance.