Billboards were erected in Phoenix, Arizona this week to thank the Department of Veterans Affairs for "keep[ing] veterans strong," despite persistent health care delays and misconduct exposed at the city's troubled VA hospital.

The billboards, first reported by the local AZ Business Magazine, are the work of local leaders representing the Veterans of Foreign Wars and Vietnam Veterans of America. The Washington Free Beacon obtained a picture of one of the billboards, which was unveiled Monday near the Carl T. Hayden VA Medical Center, the focal point of the fake wait list scandal that spurred national outcry and legislative reform of the VA more than two years ago.

"Thanks to Phoenix's 400 VA and 8,800 community providers for teaming up to keep veterans strong!" the billboards state. 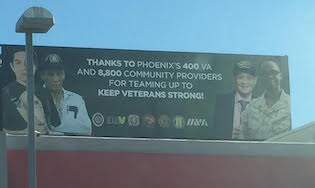 Emblems for the veterans organizations, as well as several others, are depicted at the bottom of the billboards. A source told the Free Beacon that the billboard in the picture replaced one saying "VA Is Lying, Veterans Are Dying," which spurred controversy last year.

The billboards appeared weeks after the release of a VA inspector general report that pointed to persistent delays in health care and mismanagement at the Phoenix VA Health Care System. According to the audit, at least one veteran died while waiting for care at the VA in Phoenix. Employees also "inappropriately" cancelled appointments last year.

The inspector general report sparked outrage from veterans groups and members of Congress. It was released two years after employees at the Phoenix hospital were discovered keeping secret lists to hide veterans' long wait times for appointments. The practice resulted in the death of veterans who were waiting for care from the VA.

The billboards are meant to thank the VA for its implementation of the Veterans Choice Program, which allows veterans who are facing long waits for appointments or who live far away from VA medical facilities to seek care outside the VA, according to AZ Business Magazine.

"As we look back on the launch of the Veterans Choice Program two years ago, it is clear that Veterans' access to timely, quality care in the community has significantly expanded because of this vital program," a statement released by the local organization leaders and published by AZ Business Magazine reads.

"While the Choice Program has faced its fair share of challenges, as one would expect from a program that was stood up so fast in response to a crisis, it continues to improve to help meet the growing demand for care here in Phoenix."

The program, established by legislation enacted in response to the 2014 wait list controversy, has expanded care options for veterans, but has also faced criticism. Some members of Congress have pursued legislation to expand the program or eliminate it entirely in favor of a new system to improve veterans health care.

Rep. Cathy McMorris Rodgers (R., Wash.) has introduced draft legislation that would overhaul the Veterans Health Administration and allow veterans to use their VA benefits at private health care facilities.

Sen. John McCain (R., Ariz.) has also introduced a bill in the Senate that would expand the choice program and allow veterans to seek care outside the VA's network of hospitals.

"Groups that are supposed to be looking out for veterans are reflexively defending the Phoenix VA, despite continued reports showing veterans are dying on wait lists there," Dan Caldwell, the vice president of Concerned Veterans for America, told the Washington Free Beacon. "This systemic denial that the VA is failing is exactly what is preventing meaningful reform from passing in Congress."

Attempts to get more information about the billboards from the veterans organizations that erected them were unsuccessful.

Randi Law, a spokesman for the Veterans of Foreign Wars, referred the Free Beacon to the group's Arizona department. A representative of the group’s Arizona department acknowledged the existence of the billboard but offered no information about it or the individuals responsible for the decision to erect it.

Bill Messer, the president of the Phoenix chapter of Vietnam Veterans of America, thanked the Free Beacon for its "interest in this matter" and passed on contact information for a representative at the organization's national office in Silver Spring, Maryland. Calls and emails there were not returned.

The Phoenix VA has recently been scrutinized for its ever-changing leadership and expanding budget.

The VA recently named a new director for the Phoenix VA Health Care System, its seventh in three years. The director, RimaAnn Nelson, previously oversaw the VA hospital in St. Louis, Missouri, which received poor ratings from patients and weathered medical safety issues under her leadership. The VA also directed $54 million in federal funds to the Phoenix VA to pay for reform during fiscal 2016, a supplement to the system's $703 million budget.

The Phoenix VA system is comprised of the Carl T. Hayden Medical Center and seven clinics. The system serves more than 80,000 veterans in central Arizona. The agency's most recent patient data shows roughly 8,000 veterans in Phoenix are scheduled to wait more than 30 days for appointments.