This figure represents a sharp increase from just six years ago, with adolescent girls in particular seeing a substantial jump in their reported rates of depression. The report reflects yet another frightening indicator of America's teen mental health crisis.

The new data were released as part of the 2018 National Survey on Drug Use and Health, an annual survey of teens aged 12 to 17, as well as adults. Survey proctors ask teens a battery of questions about depression—whether, in the past year, they have lacked joy in life or a sense of self-worth, and struggled with concentration, sleep, or eating. If an individual experienced a sufficient number of these, or other, indicators for a period of at least two weeks, he or she is considered to have suffered a "major depressive episode" (MDE). 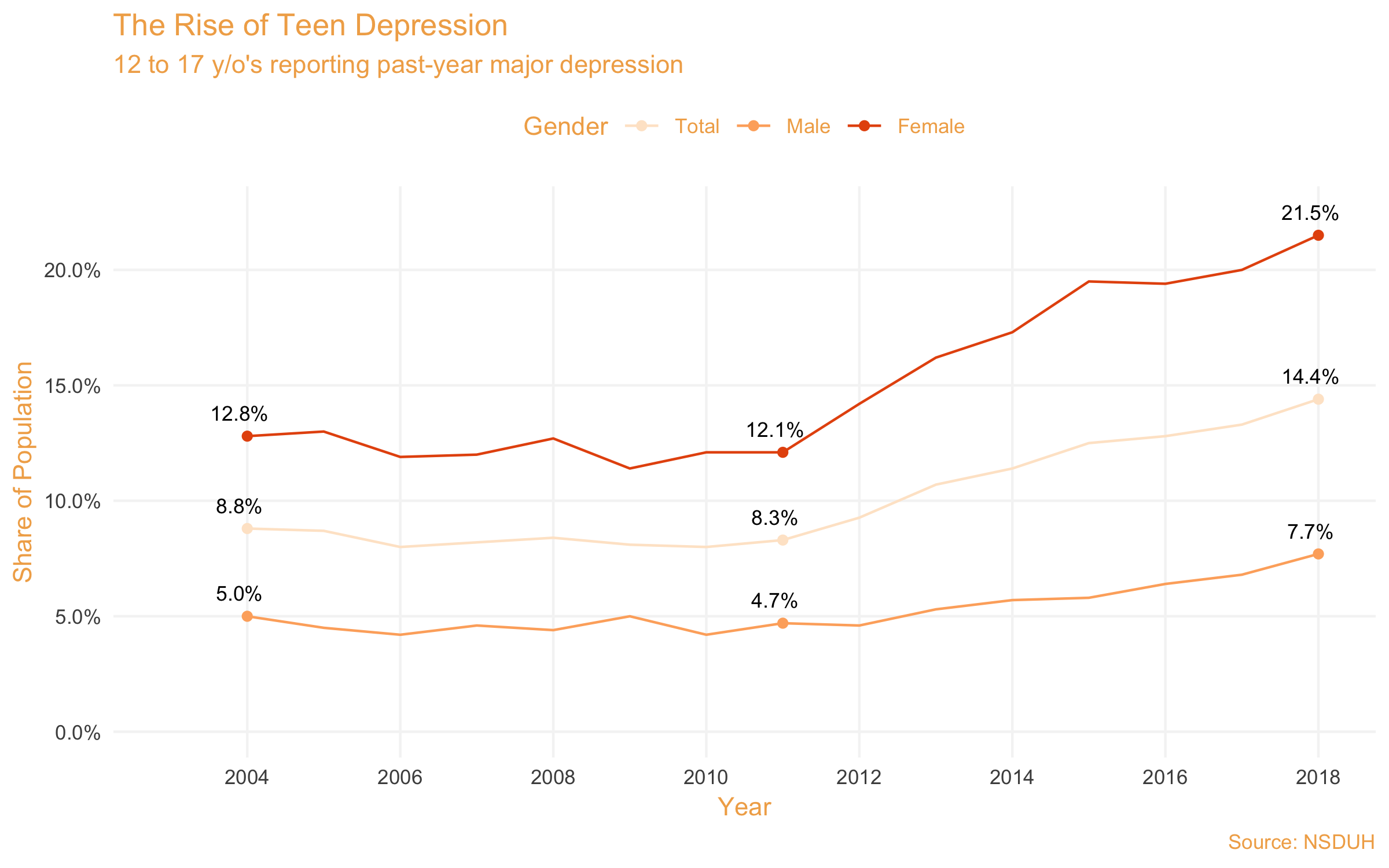 The most pronounced—and concerning—disparity, however, is by gender. While teenage girls have always been more prone to major depression, America has now reached a point in which more than one out of every five girls has experienced depression in the past year. That is nearly double the 2011 rate.

Indeed, as the Wall Street Journal recently noted, today's teenage girls experience disturbingly high levels of anxiety, depression, and loneliness. They are now attempting suicide at unprecedented rates, trends which began to take off around the same time that the NSDUH's measure of depression did.

These trends appear to persist into college. Nearly 14 percent of 18- to 25-year-olds experienced an MDE in 2018, a significant increase from roughly 8 percent for most of the decade preceding 2013. A recent major study looked at surveys of U.S. undergraduates specifically and found significant increases in depression, anxiety, nonsuicidal self-injury, suicidal ideation, and suicide attempts, among other indicators.

In other words: America's teens, especially its girls, are becoming depressed and staying depressed through college. What, exactly, has caused this grim wave? The best answer is: No one really knows.

There are, to be sure, ideas. Teens spend less time socializing, "going out," dating, or having sex—all things which may be linked to depression. They spend more time in front of screens, too much time according to the majority of them. Whether or not this change causes unhappiness is hotly debated. With majorities of 18- to 22-year-olds in college for the first time in American history, teens are also under more pressure to succeed in education, as parents pour more and more time—and therefore more and more stress—into their older kids' lives.

One or more of these changes, even working in conjunction, may explain the depression so many teens are now facing. But there is not, as of yet, any decisive answer explaining the sudden spike.

One thing is for sure: America's teens are growing more and more depressed by the year, and we just do not know how to stop it.