Quarter of children remain separated from parents, most of whom were deported

Most but not all of the children over age five separated from their parents by U.S. immigration officials have been reunified as of Thursday night.

That is according to the Department of Homeland Security and the American Civil Liberties Union, which jointly released the information as part of a court-mandated status update. Of some 2,500 children detained, three-fourths have been either reunified or determined to be ineligible for reunification due to mitigating factors.

The reunification is a product of on-going litigation in Ms. L. v. U.S. ICE, the case brought by the ACLU on behalf of separated families. Ms. L. came together following the uproar at the separation of parents and children at the southwestern border which was prompted by President Donald Trump's "zero-tolerance" prosecution policy.

Trump has since ordered an end to family separation, but Ms. L. concerns the reunification of families separated in the period between the implementation of zero-tolerance and Trump's EO, as well as families separated for other reasons (the named plaintiff in Ms. L., for example, is an immigrant from the Congo).

Judge Dana Sabraw, who oversaw the Ms. L. litigation, had given the government a month to reunify all children with their families. Two weeks ago, it successfully reunified all children under the age of five with their parents, as specified in the original order. The government then had two weeks to meet Thursday's deadline.

According to the data released by DHS, 2,551 children ages 5 to 17 were identified in the custody of the Office of Refugee Resettlement (ORR), the bureau of HHS responsible for caring for unaccompanied children. Of those, just over 1,800 were released from ORR custody, with the majority now detained with their parents by ICE. A number of children were also reunited with their parents already in the interior or in DHS custody, or had turned 18 by the time of reunification.

But 700 or so children remain separated from their parents. In that group, the majority's parents have been deported or otherwise left the country, while a further 170 have parents released into the interior or whose location is unknown. The remainder include 120 parents who waived reunification and 67 who DHS identified as having "red flags," i.e. evidence of abuse or criminal history. 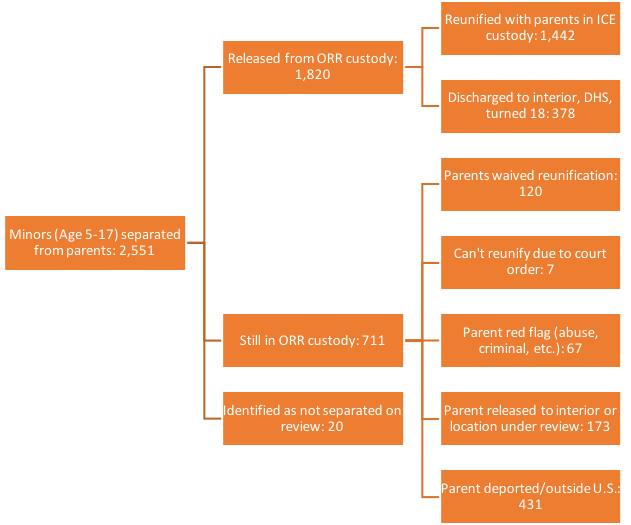 The administration emphasized Friday morning that all children who had been remanded to ICE by ORR had since been reunified with their parents.

The ACLU expressed concern, however, about the children still in ORR custody, especially those whose parents had been deported. It called on the court to order the government to explain in detail what efforts they were making to reunify these additional children. It also contended that "evidence submitted yesterday" made clear that parents who had waived reunification did not realize they were doing so, and that many in fact wish to be reunited.

Judge Sabraw is expected to consider the ACLU's requests, and assess the success of family reunification, in a hearing Thursday afternoon.