The visas, issued under the H-2B program for the admission of temporary nonagricultural workers, are meant to respond to a tightening labor market by expanding the number of foreign-born workers in line with the supply U.S. employers say they need. However, some immigration hawks, normally close allies of President Donald Trump, decried the move as a threat to American breadwinners.

The expansion is set to be published in the federal register on Wednesday. It was put together by the U.S. Departments of Homeland Security and Labor, which oversee enforcement of laws governing foreign labor.

According to DHS, the 30,000 additional visas will be available exclusively to "returning workers," meaning those who have previously received an H-2B visa at any point between FY 2016 and today. Further, DHS intimated, the availability of these visas "is restricted by prioritizing only those businesses who would suffer irreparable harm without the additional workers."

H-2 visas are temporary authorizations for foreign-born individuals to come to the United States to work in a job for which, per the Immigration and Nationality Act, there are not otherwise U.S. citizen workers who are "able, willing, qualified, and available to do."

There are two kinds of these authorizations: the H-2A, for seasonal agricultural workers, and the H-2B (the one being expanded), for other kinds of workers. H-2 visas do not qualify a person for permanent residency, although an employer can sponsor an H-2B holder separately for a green card. 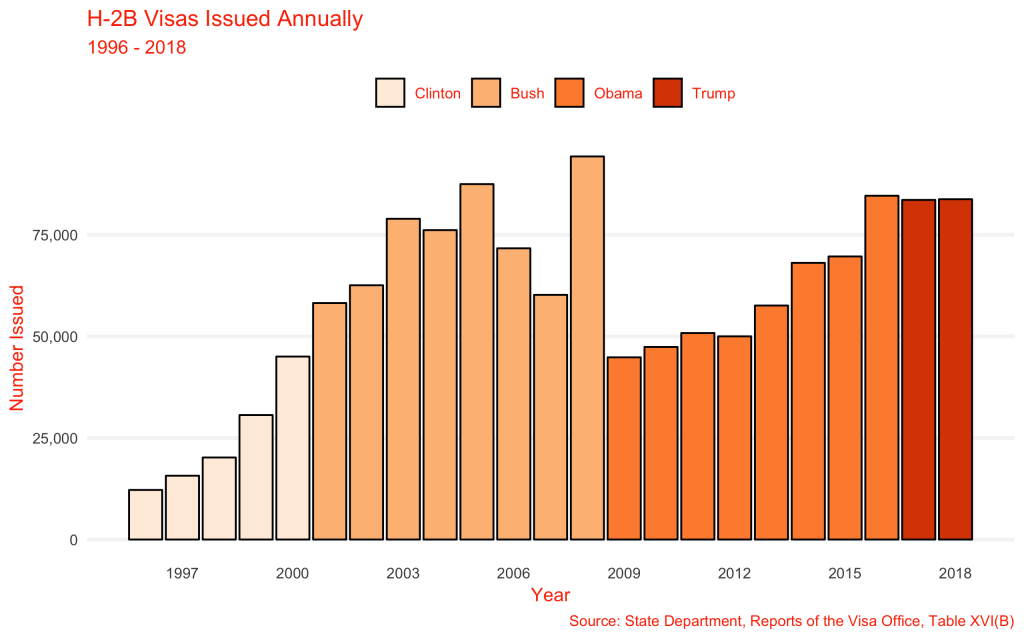 The number of H-2B visas has ebbed and waned in recent years, in response to both labor demand and shifting political winds. In 2018, DHS approved 83,000, a figure elevated by comparison to Barack Obama's first term but normal for much of his second term and George W. Bush's time in office.

According to the National Immigration Forum, H-2B holders work in a "wide variety" of industries, although nearly half work in either landscaping/grounds-keeping (40 percent) or forestry (8 percent). The remainder, the NIF indicates, include industries like "amusement/recreation, hospitality (maids/housekeeping and hotel staff), meat/fish processing, construction, and restaurant (chefs, waiters/waitresses, and dishwashers)." As of 2015, more than 70 percent of H-2B holders were from Mexico.

Monday's announced expansion of the H-2B program is therefore meant to increase the availability of such workers in response to the insistences of business leaders who say they face a labor shortage. With the unemployment rate at its lowest point since 1969, the supply of native-born labor may be outstripped by the demand for it.

"Without swift action on your part," U.S. Chamber of Commerce Vice President Neil Bradley wrote to DHS and DOL in March, "employers across a range of industries, many of which are small businesses, will be unable to meet their workforce needs in the spring and summer months forcing them to reduce—and in some cases, cease—operations."

Labor advocates and immigration hawks have been critical of claims that the tight labor market is a bad thing, arguing that employers should hike wages rather than asking for increased immigration quotas to increase the supply of workers. Sen. Tom Cotton (R., Ark.), usually a staunch ally of Trump on immigration issues, took to Twitter Monday to decry the planned expansion of H-2B visas.

"I'm disappointed at the decision to import tens of thousands more low-skilled workers to take jobs that American workers want to do," Cotton wrote.

Cotton argued further in a series of tweets that the added foreign workers would suppress wages and keep young, low-skilled native-born workers out of the workforce. The White House did not respond to a request for comment on Cotton's and others' criticisms.

Another potential concern among immigration restrictionists is an expanded risk of visa overstay. While the Government Accountability Office found in 2012 that H-2 visa holders accounted for just 2 percent of overstayers, DHS said its choice to reward visas only to returning foreign workers was meant in part to address these concerns.

"Returning H-2B workers have demonstrated their ability to abide by the terms and conditions of the H-2B program and, therefore, are less likely to remain in the United States and work without authorization after their legal status has expired," the agency said in its announcement. "H-2B workers often return to the same employer year after year on a seasonal basis, are vetted, trusted, and can have their visas approved more rapidly given their known history."

The major takeaway from DHS's announcement appears to be that if Congress does not like current temporary immigration levels, it is up to Congress to fix it.

Under the Immigration and Nationality Act, Congress sets a cap on the number of H-2B visas issued in a given year, although DHS has the discretion to exceed that cap in certain circumstances. McAleenan said Monday that it should be up to the people's branch to balance the needs of business with the interests of American workers.

"The truth is that Congress is in the best position to establish the appropriate number of H-2B visas that American businesses should be allocated without harming U.S. workers," the acting DHS Secretary said. "Therefore, Congress—not DHS—should be responsible for determining whether the annual numerical limitations for H-2B workers set by Congress need to be modified and by how much, and for setting parameters to ensure that enough workers are available to meet employers' temporary needs throughout the year."