Majority Forward, a nonprofit with ties to Schumer's Senate Majority PAC, pushed $57.4 million into super PACs that helped Democrats regain the majority in Congress's upper chamber. The vast sum far eclipses the $6.2 million it funneled into election activity in the 2016 and 2018 cycles combined. The nonprofit does not disclose its donors, making it difficult to identify who provided the funding to back Schumer's efforts.

Majority Forward's election cash spike was made possible by a record-breaking fundraising haul from mid-2018 to mid-2019, when the group received $76 million in anonymous donations. That same year, it passed tens of millions to other left-wing nonprofits for its primary purpose of bankrolling voter engagement. Its largest donation was $14.8 million to America Votes, which later found itself under investigation in Georgia for allegedly sending ballot applications to non-residents.

As Majority Forward propped up outside voter efforts, a large chunk of its election-related cash—$47.8 million—went to Schumer's Senate Majority PAC, according to FEC filings. Both groups are led by J.B. Poersch, a Schumer ally, and share personnel and office space. The nonprofit passed millions more to the North Star super PAC, which opposed Sen. Dan Sullivan (R., Alaska), and the Lincoln Project, whose cofounder recently left the group for having "inappropriate" sexual conversations with young men.

Democrats have long assailed the influence of "dark money" in politics while quietly outpacing Republicans in its usage. According to the Center for Responsive Politics, in the 2020 elections $326 million in dark funds benefited Democrats while $148 million benefited Republicans. Schumer's allied groups have used dark money while he and other leaders, including Sen. Sheldon Whitehouse (D., R.I.), have set their sights on forcing right-leaning groups to make public a list of their donors.

In 2019, Schumer, Whitehouse, and other Senate Democrats called on the Judicial Crisis Network, a conservative organization, to disclose individuals who contributed more than $10,000 to their group. They criticized the network for continuing to "conceal the identity of their donors," who "have contributed tens of millions of dollars used to fund political advertising campaigns in support of nominees like Brett Kavanaugh and Neil Gorsuch." Meanwhile, Democrats have benefited from their own dark money judicial groups, including Demand Justice.

Now, Schumer will push the For the People Act, a bill backed by progressive advocacy groups, as one of his first acts as majority leader. The bill contains provisions that would make political nonprofits disclose the identities of donors who give more than $10,000. It would also require nonprofits to file disclosure reports to the Federal Election Commission when more than $10,000 is spent on election-related endeavors.

But the bill stands little chance of becoming law. Sens. Joe Manchin (D., W. Va.) and Kyrsten Sinema (D., Ariz.) are opposed to eliminating the filibuster, meaning Democrats would have to gain approval from 10 Republican senators.

Liberal dark money helped propel Biden into the White House. According to Bloomberg, Biden benefited from $145 million in dark funds. Nearly $55 million of this amount was passed through the Sixteen Thirty Fund, a left-wing nonprofit incubator managed by Arabella Advisors, the Washington Free Beacon reported. Arabella-managed funds raised $715 million for liberal causes around the country in 2019.

Majority Forward did not respond to a request for comment. 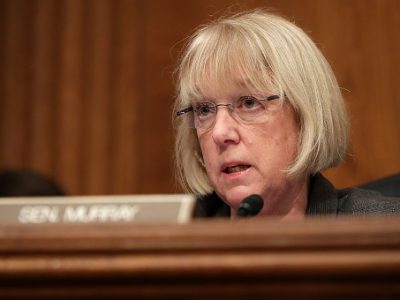 SICKENING: Democrats Are Waging War on Diversity, Equity, and Inclusion