Goroff, a longtime chemistry professor at the university, used "internal Stony Brook distribution lists" in July 2019 to announce her candidacy against Republican congressman Lee Zeldin. The Democrat's email—which reached more than 150 students, according to the university's office of the president—touted her accomplishments as a professor before asking recipients to help "launch this campaign" by donating through a fundraising link. 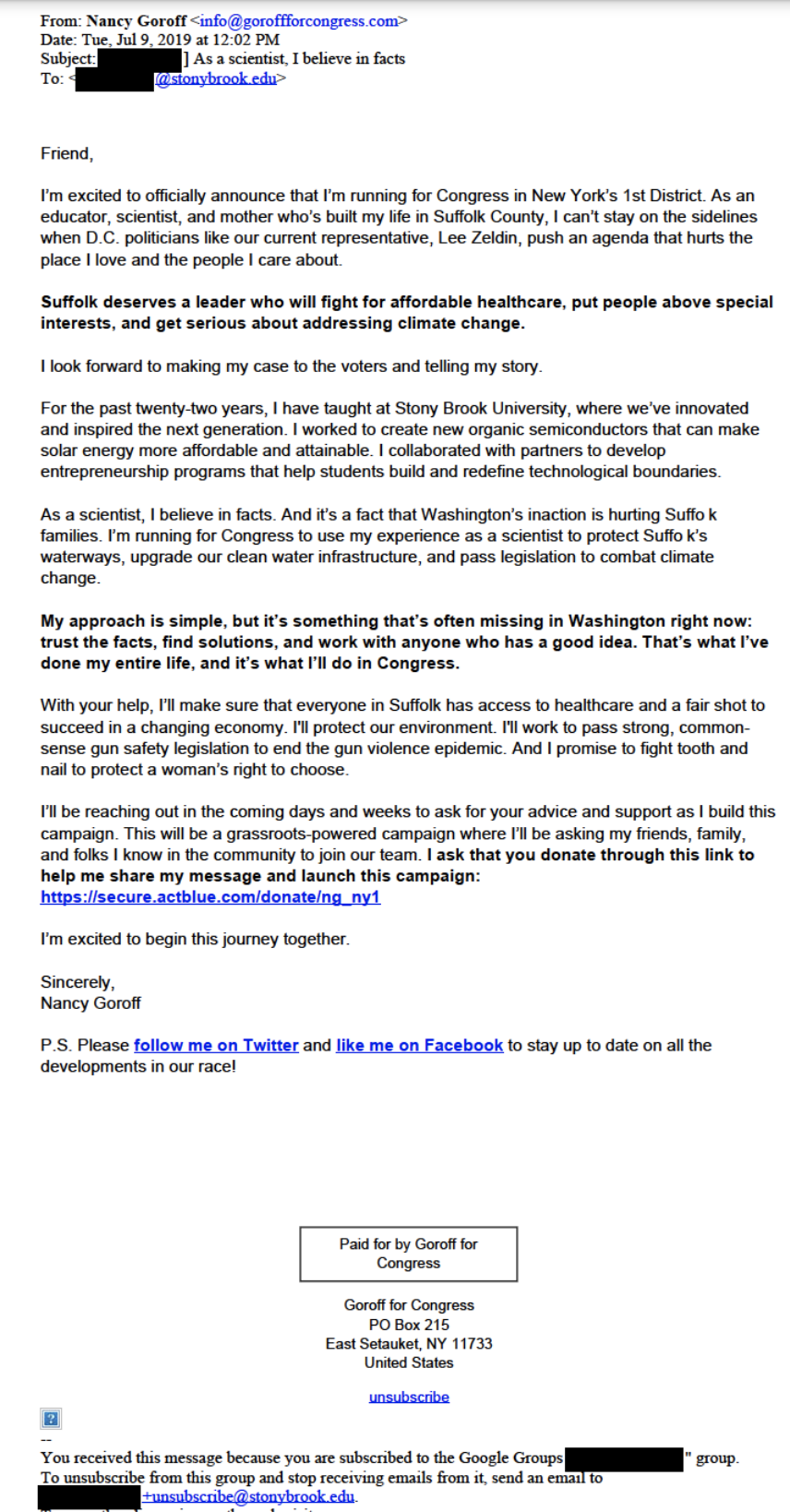 Just 30 minutes after Goroff sent the fundraising plea, College of Arts and Sciences dean Nicole Sampson emailed the Democrat to rebuke her use of the email list. Sampson noted that the university had "already received several complaints," which were referred to Stony Brook's general counsel "for legal review."

Goroff also used her public Stony Brook email address to solicit campaign cash from wealthy liberal donors. According to communications obtained by the Free Beacon, the Democrat emailed New York astrophysicists Jim and Robin Herrnstein on July 3, 2019, to request a phone call regarding her campaign. The couple—who donated $3 million to Stony Brook in 2013—gave a maximum contribution of $11,200 to Goroff's campaign just two days later. In addition, on July 6, 2019, Goroff used her university email to send a campaign fundraising link to liberal Massachusetts donor Leslie Masson. Masson and her husband also gave Goroff $11,200 within days. The couple went on to donate more than $375,000 to 314 Action, an outside group that Goroff noted was giving her "a lot of support" in her email to Masson. 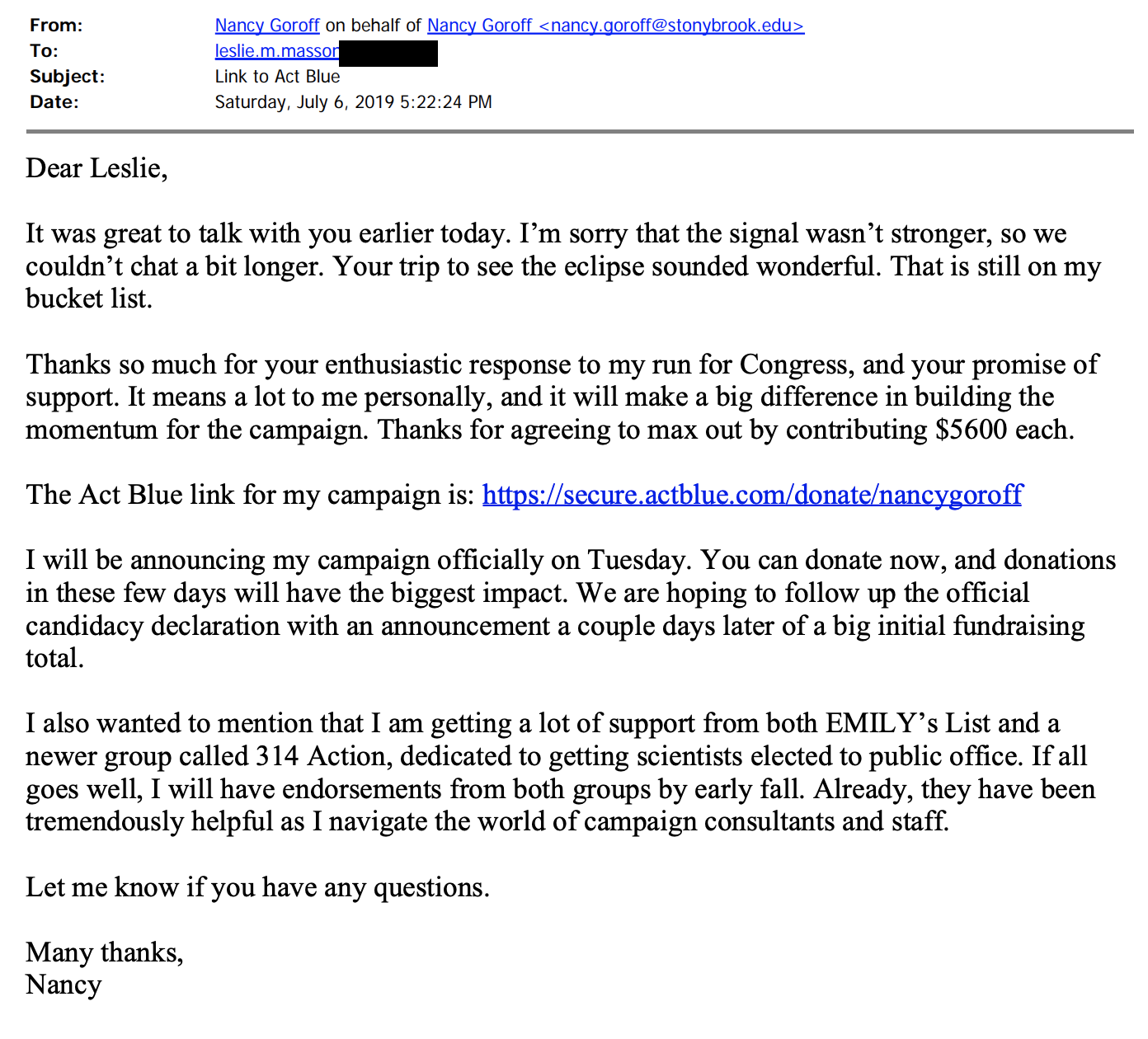 Goroff often touts her work at Stony Brook in her bid to unseat Zeldin. In one recent ad, the Democrat calls herself a "scientist" who is "running for Congress to use science to lead us out of this crisis." Goroff also advertises her former role as "Chair of the Chemistry Department at Stony Brook" on her campaign site, pledging to use her "skills as a scientist to analyze the facts in order to make the right decisions for Long Island families."

"States prohibit use of official resources for political or campaign purposes—same as the federal government. If it is a publicly funded university, that is a state resource," Arnold said. "So yes, she can't use anything from her employer, whether it be an email list, computers, her professional email. She can't use any of that."

Goroff, who did not return a request for comment, told Sampson that her campaign's use of internal Stony Brook email lists was "inadvertent" in a message obtained by the Free Beacon. She did not, however, address using her university email to solicit additional campaign contributions.

"My apologies! Those inclusions were inadvertent," Goroff said. "I tried to remove all lists from my contacts, but missed several that I thought I had caught. I think they were in the lists in duplicate."

While Stony Brook University policy explicitly prohibits employees from using "university or state resources" for "partisan political purposes," the school has promoted Democratic politicians in the past. In 2014, its Student Affairs office sent an email to the entire student body urging students to attend a campaign rally for former Democratic congressman Tim Bishop. The university did not promote a Zeldin rally held a month earlier.

This is not the first time Goroff has potentially flouted ethics laws. The Democrat, who has personally loaned her campaign more than $1.1 million, failed to disclose millions in underlying investments in her latest candidate financial disclosure.

Goroff is currently on leave from Stony Brook through the end of the year. She will face Zeldin in November after winning her June primary by fewer than two points.