Wisconsin Democratic Senate candidate Alex Lasry—who has spent the past few weeks slamming Sen. Ron Johnson (R.) for traveling four years ago on a congressional delegation to Moscow—visited Russia himself shortly after President Vladimir Putin's controversial election in 2012, according to a now-deleted post on Lasry's Facebook page.

Lasry, the son of a hedge fund billionaire, posted a photo of himself posing on a gold-carved, red velvet throne while dining at a luxury tourist restaurant inside an imperial palace in Saint Petersburg, Russia, according to a copy of the June 17, 2012, post obtained by the Washington Free Beacon.

"Oh I just can't wait to be king," wrote Lasry in the caption for the photo, in which he is holding a red crystal goblet. 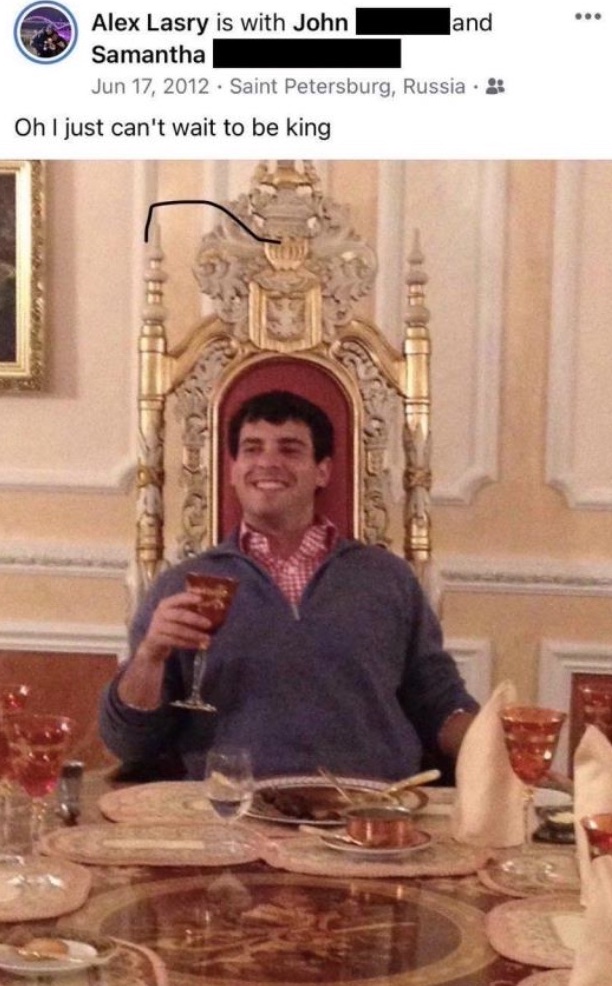 The picture could complicate Lasry's attempts to contrast himself with Johnson, whom Lasry has blasted as a "Putin apologist" who "would rather spend the Fourth of July in Moscow than Wisconsin." It could also play into criticism from Lasry's Democratic primary opponents, who argue that his massive family wealth has left him out of touch with voters.

The restaurant, Russian Ampir, is a popular site with tourists, according to TripAdvisor, which says the hotspot gives diners an "acquaintance with the cuisine of Russian aristocracy in the days of the imperial St. Petersburg."

"Even the most exacting audience will be fascinated by the view of tables served with 24-karat gold flatware, exclusive porcelain of 18th century, crystal wares encrusted with gold," said the travel guide.

Lasry, who is polling in a dead heat against fellow Democrat and Wisconsin lieutenant governor Mandela Barnes in the party's Senate primary, has been running ads criticizing Johnson over the Russia trip, saying Wisconsinites can't count on the senator to "represent our values of freedom and democracy." Johnson in July 2018 traveled to Moscow on an eight-member Republican congressional delegation led by then-Senate Appropriations Committee chairman Richard Shelby (R., Ala.). The Kremlin later barred Johnson and several other senators from visiting on a bipartisan delegation trip in 2019, reportedly in retaliation for their support of U.S. sanctions against Russia.

"I'll always represent you, as a Wisconsinite and as an American," said Lasry in the ad.

Lasry's campaign did not respond to a request for comment about the nature of the trip. At the time, Lasry had just finished a three-year stint as an aide in the Obama administration. He went on to attend graduate school at the New York University Stern School of Business.

Lasry's trip took place amid global outcry and massive protests against Putin's 2012 election, which many pro-democracy activists said was fraudulent, and as U.S.-Russian relations were growing increasingly rocky.

One year after Lasry's Russia trip, Lasry's father, hedge fund billionaire and Democratic donor Marc Lasry, was dropped from consideration as the Obama administration's ambassador to France due to alleged involvement with an illegal high-stakes poker ring and reported ties to a Russian mobster. The poker game later became the focus of the film Molly's Game.

The younger Lasry went on to work as an executive for the Milwaukee Bucks, which is co-owned by his father.

One of Lasry's far-left Democratic primary opponents, Tom Nelson, during a party forum last week slammed him as an "out-of-state billionaire," citing the candidate's wealth and East Coast upbringing. The Democratic primary is scheduled for Aug. 9.

Colorado Democrat Kicks Off Reelection Campaign With a Lie