Barnes posted an Instagram photo of himself shaking hands with Wright at a small group dinner in Milwaukee in 2013. "What's for certain is that the man is brilliant. It was amazing to hear Dr. Jeremiah Wright speak this evening," Barnes, who was then serving as a state representative, wrote in the caption. 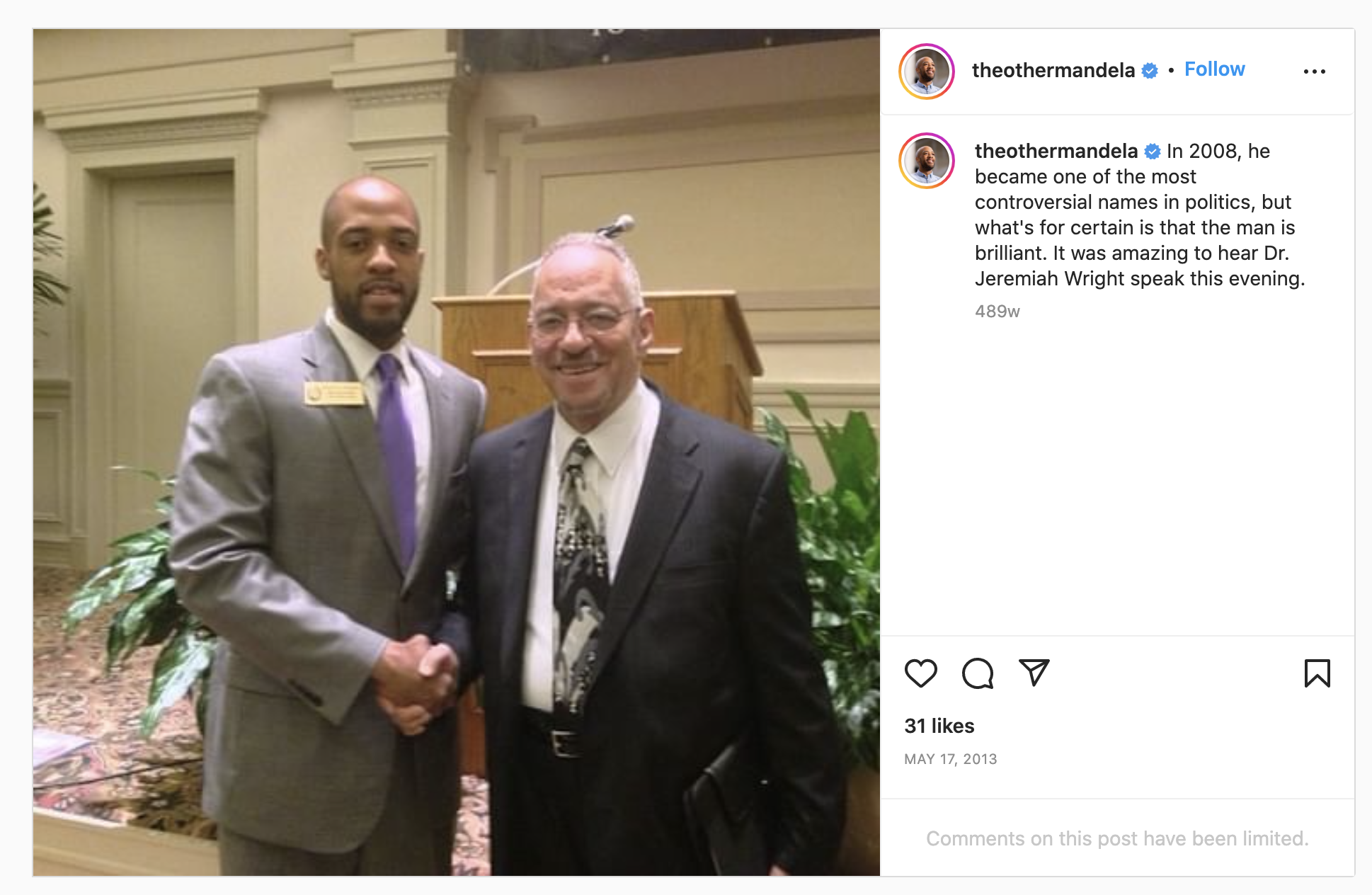 Barnes's comments could add to perceptions that the lieutenant governor holds radical views that are out of step with state voters. Barnes's applause for Wright came years after Wright's former congregant, Barack Obama, famously cut ties with Wright in 2008 due to the preacher's inflammatory anti-American remarks. Wright went on a public rant blaming "them Jews" for his fallout with Obama. Wright previously compared the United States to al Qaeda and claimed that the U.S. government invented HIV to kill black people.

Video of Wright's speech at the dinner, which was reviewed by the Washington Free Beacon, included strong condemnations of the United States and Israel.

In his speech, Wright claimed the Palestinians "are undergoing ethnic cleansing as we gather here tonight."

Wright also appeared to compare the Holocaust to U.S. actions during the wars in Iraq and Afghanistan, calling for "justice not just for the perpetrators of the war crimes at Auschwitz and in Germany, but justice also for the war crimes at Abu Ghraib, the secret CIA rendition camps where waterboarding is an everyday, commonplace occurrence."

Wright added that "war crimes" are being "committed against Gaza and the residents in Guantanamo" by the Israeli and U.S. governments. He described the American bombings of Hiroshima and Nagasaki, which ended World War II, as "murders."

While running for lieutenant governor in 2018, Barnes stood by his praise for Wright, telling the Milwaukee Journal Sentinel that the pastor gave a "good speech that night." Barnes's original post about Wright is still on the Senate candidate's Instagram page.

"Rev. Wright has been explicit about his hateful views," said Rabbi Abraham Cooper, director of global social action for the Simon Wiesenthal Center. "Anyone running for such an important office should denounce this hatred, especially when anti-Semitic hate crimes continue to plague the country."

"There have been too many candidates from both parties who've forgotten that if elected they are supposed to represent all their constituents," he added.

The Republican Jewish Coalition slammed Barnes for his support for Wright, saying this is "why Mandela Barnes's campaign for U.S. Senate is imploding—because he is too radical for Wisconsin."

"Mandela Barnes's praise of Rev. Jeremiah Wright—who has a long and appalling history of trafficking anti-Semitic messages—as 'brilliant' is shameful," said Sam Markstein, a spokesman for the Republican Jewish Coalition. "And unfortunately, the shame doesn't end there: When asked about his comments, Barnes doubled down, saying Rev. Wright gave 'a good speech that night.'"

Markstein added that Barnes's comments weren't an "isolated incident" and noted that Barnes previously belonged to the Wisconsin chapter of Peace Action, which has promoted boycotts of Israel.

Josh Block, the former spokesman for the American Israel Public Affairs Committee, said Barnes's praise for the pastor was a "serious concern" due to Wright's history of "hate speech."

"Anyone seeking a higher office … should know better than to praise an openly anti-Semitic hate-monger as a 'brilliant' person," said Block. "It raises genuine questions about their judgment."

Wright has a history of inflammatory comments. During his infamous 2003 "God Damn America" sermon, he accused the U.S. government of "inventing the HIV virus as a means of genocide against people of color."

"The government gives [black people] the drugs, builds bigger prisons, passes a three-strike law, and then wants us to sing 'God Bless America'? No, no, no," Wright said. "Not 'God Bless America,' God damn America. That's in the Bible, for killing innocent people."

Wright in 2009 blamed his fallout with Obama on the "Jewish vote, the A-I-P-A-C vote that's controlling him," a reference to the American Israel Public Affairs Committee.

"Them Jews ain't going to let him talk to me," Wright told the Daily Press of Newport News, Va. "I told my baby daughter that he'll talk to me in five years when he's a lame duck, or in eight years when he's out of office."

Update 1:20 p.m.: This piece has been updated with comment from the Barnes campaign.