As a corporate attorney, Rep. Susan Wild (D., Pa.) represented a children's psychiatric hospital after one of its counselors sodomized a teenage patient, arguing that the attack was a "medical incident" that should be covered by insurance. Earlier this year, Wild sought $1 million in congressional funding for the organization, which has had numerous other sexual assaults, homicides, and suicides at its facilities over the years.

Wild, who was recently appointed chair of the House Ethics Committee, represented the Pennsylvania-based KidsPeace in a 2005 lawsuit with the nonprofit’s insurance company over a settlement with a 15-year-old patient raped by his counselor, according to court records obtained by the Washington Free Beacon. The patient, Matthew Craft, said counselor Dean Sine imprisoned and raped him in a facility bathroom. After the rape, according to Craft, KidsPeace staff treated him for constipation.

Craft sued KidsPeace for negligence, saying the company knew of Sine’s propensity for violence stemming from a 1993 incident in which he was charged with manslaughter after suffocating a 12-year-old KidsPeace patient. Wild asserted that KidsPeace’s insurance company, and not KidsPeace, was on the hook for a $700,000 settlement payout to Craft because the rape was a "medical incident" covered under its insurance policy. She also claimed that KidsPeace could not have "prevented [Sine’s] malfeasance" without a "crystal ball," and thus was not negligent.

In April, Wild asked the House Appropriations Committee to give $1 million to KidsPeace to repair its Orchard Hills campus in Orefield, Pa. Wild said in a letter to constituents that she would "likely receive hundreds of applications" for funding through the Community Funding Program, but would be able to pick just 10 projects for consideration by the House Appropriations Committee that "fill a clear and present need in the community" and have "proven, widespread, and robust support from the community."

"Our organization is a constituent of Congresswoman Wild," KidsPeace spokesman Robert Martin told the Free Beacon. "As such we have worked with her office on exploring funding possibilities for our operations in the 7th Congressional District."

Wild’s lobbying on behalf of a former client, especially one with a controversial track record, could provide a line of attack for Republicans in a tight contest that could determine which party controls the House. Wild is facing Republican Lisa Scheller, who she beat by just 14,000 votes in 2020. Wild’s challenger in 2018 ran an ad referencing Wild’s representation of KidsPeace, but it has so far not been brought up in the 2022 race.

Wild represented KidsPeace in other litigation related to sexual assault at its facilities. She represented KidsPeace’s Mesabi Academy in Minnesota in a 2007 insurance dispute after a youth care worker was raped by a patient. As with the case in Pennsylvania, Wild argued that KidsPeace’s insurance company should have to pay a $2 million settlement to the woman after she sued for negligence. Years after the case, an independent investigator found that the facility "had far more complaints than any other corrections-licensed juvenile facility" in the state, according to reports. Seventeen families who alleged abuse and negligence against Mesabi Academy settled with the organization last year for $1.5 million.

Wild said in her request to the House Appropriations Committee she does not have a financial relationship with KidsPeace, though she has maintained a close working relationship with the organization since joining Congress. In August 2019, she toured the KidsPeace Orchard Hills facility with KidsPeace lobbyist Caren Chaffee. Chaffee has lobbied Congress and the Department of Health and Human Services for funding for KidsPeace facilities and its program to house unaccompanied children brought to the United States, according to lobbying disclosures.

Wild praised KidsPeace in 2019 after visiting a facility to check on more than 112 Central American refugees in the organization’s care. She said she "was relieved to see that the children at KidsPeace appear to be housed in a safe, clean, and comfortable setting" and that the organization was "experienced in caring for children and adolescents with behavioral and mental health challenges."

The Department of Health and Human Services, which funds the unaccompanied minor program, has awarded more than $81 million in funding to KidsPeace since 2017, according to a federal spending database.

While the case Wild handled is perhaps the most prominent case of abuse at KidsPeace, the organization has been at the center of multiple other scandals over the years.

Sine was charged with involuntary manslaughter in the 1993 death of 12-year-old KidsPeace patient Jason Tallman. Sine sat on the 85-pound boy for 10 minutes as he struggled to breathe before dying from asphyxiation. Sine went to trial but was acquitted of charges in 1994. KidsPeace settled with Tallman’s family for $1 million. Sine was convicted in 2003 for molesting a 14-year-old boy in a case unrelated to KidsPeace.

In 1998, KidsPeace patient Mark Draheim died after being restrained by three counselors at the Orefield, Pa., facility. Draheim’s mother said after his death that she tried to remove her son from the facility after he said he was raped numerous times by another patient. Police disclosed they had opened an investigation into the abuse before Draheim died, and that evidence was found during his autopsy that he was "anally raped," according to reports at the time.

In 2000, a KidsPeace counselor alleged in a lawsuit that he was fired for reporting an attack he suffered from a patient. The counselor, Jeff Wimmer, alleged that KidsPeace officials were upset by the report because it resulted in a loss of revenue for KidsPeace after the patient was transferred to another facility.

Wild recklessly joined a Zoom call while swerving through traffic in May, the Free Beacon reported. Her office did not respond to a request for comment about the past litigation or the congressional funding request. 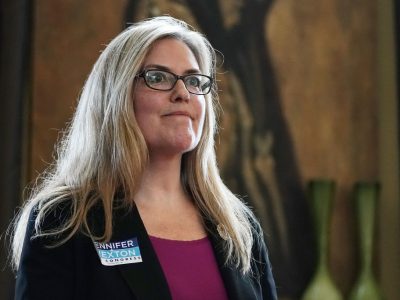