Democratic congresswoman Marie Newman (Ill.) promised a six-figure, taxpayer-funded job to a local activist that he says was a bribe to keep him out of a tight primary race—an apparent violation of federal law.

Columbia College Chicago adjunct professor and Palestinian activist Iymen Chehade sued Newman in January for breach of contract. Included in the lawsuit is a December 2018 agreement signed by Newman that promised Chehade a senior role in the Democrat's congressional office should she be elected. According to the complaint, which was first reported by CBS Chicago and obtained by the Washington Free Beacon, Newman offered the contract "in an effort to induce Chehade not to run against her in the primary."

Newman has not disputed the authenticity of her contract with Chehade—a campaign spokesperson instead shared a statement with the Washington Free Beacon arguing the activist did not receive the job because he "misrepresented his qualifications" and "was ill-suited for a senior role in a congressional office." The spokesperson also called Chehade's claims "fictitious and frankly ludicrous."

According to the contract, Newman agreed to employ Chehade as both chief foreign policy adviser and either district director or legislative director. The role would have paid Chehade between $135,000 and $140,000 and did not require him to "maintain specific hours at the office," the agreement states. Newman also promised Chehade "complete discretion about the selection and employment termination of staff members under his supervision" and pledged to "use her best efforts to provide Chehade a private office within the congressional suite." 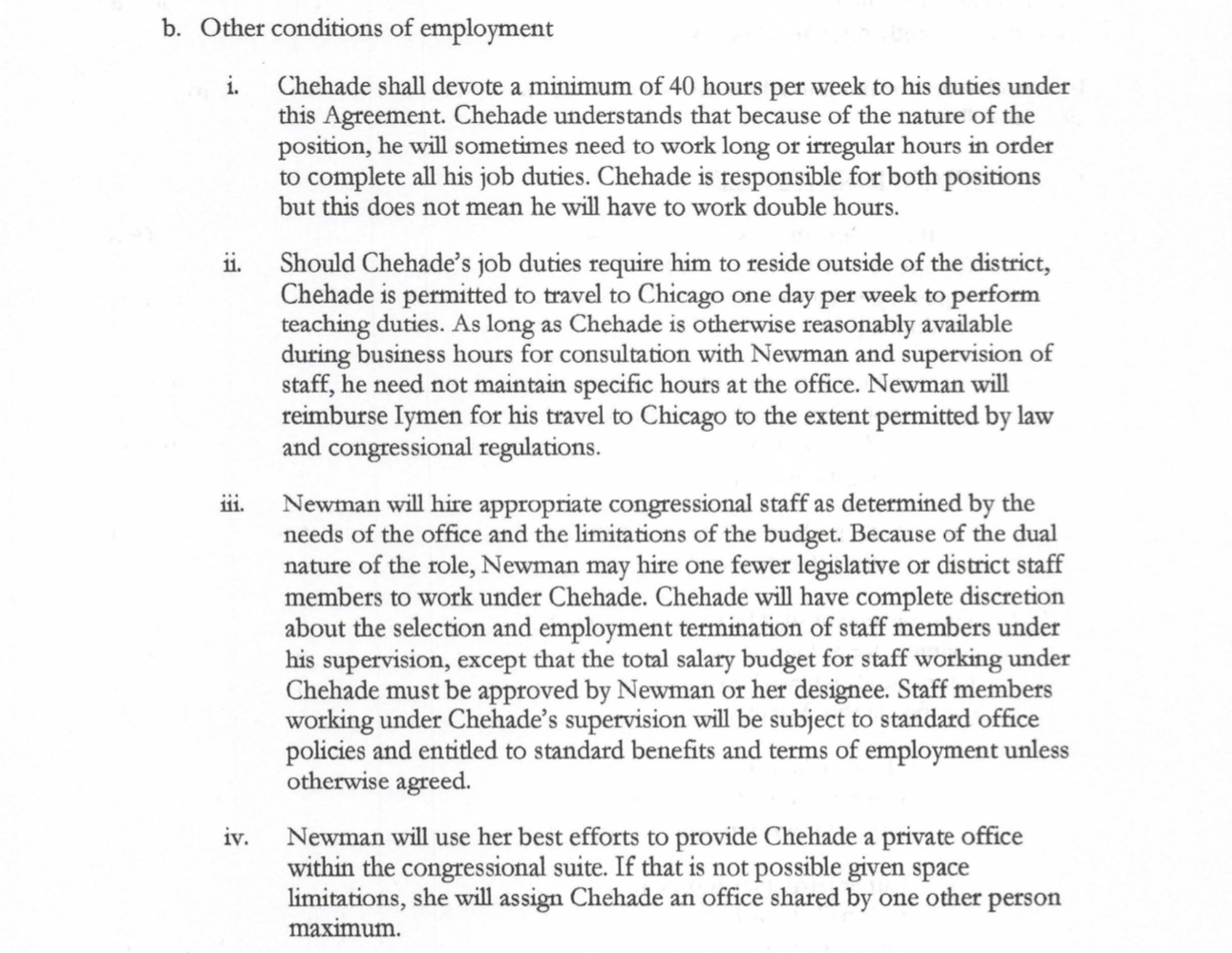 Chehade's involvement in the primary would have likely siphoned votes away from Newman, who defeated Lipinski by fewer than 3 points. Illinois's Third Congressional District holds the largest concentration of Arab Americans in the state and is home to American Muslims for Palestine (AMP), a prominent anti-Israel advocacy group and leading promoter of the Boycott, Divestment, and Sanctions movement. Chehade also backs BDS and spoke at an AMP-sponsored event in 2012.

Chehade went on to assist Newman's campaign after accepting the agreement and declining to enter the primary, the lawsuit states. According to the complaint, Chehade served as an "informal" adviser to Newman prior to the primary and "helped her craft her campaign statement on Israel/Palestine." That statement included Newman's support for "the First Amendment right to pursue the boycott, divestment, and sanctions campaign" and opposition to "any federal, state, or local legislation" criminalizing the BDS movement.

Newman's taxpayer-funded congressional lawyers are seeking to dismiss the lawsuit by claiming that the Democrat "did not have authority to enter into such an agreement." They also argue that the case should be tossed because government officials are immune to most lawsuits.

"Congresswoman Newman could not breach the contract in her individual capacity because she could only hire Mr. Chehade to work in the Congressional office in her official capacity,"  Newman's motion to dismiss states.