Democratic gubernatorial candidate Terry McAuliffe incorrectly stated on Thursday night that there were 1,142 children in Virginia's intensive care unit beds, a gross overestimation of the virus's current impact in the state.

"We in Virginia today, 1,142 children are in ICU beds," McAuliffe stated during a roundtable discussion with local reporters. The statistic is a massive overestimation. Virginia Department of Health statistics show that there are a total of 443 people of all ages currently in ICU beds, a fraction of the figure McAuliffe put forth for children.

McAuliffe also said during the roundtable Virginia had "8,000 cases on Monday," another exaggerated statistic. On Monday, Oct. 4, Virginia saw 1,220 "confirmed" cases and 864 "probable" cases, according to the Virginia Department of Health.

The state has never seen 8,000 confirmed cases in a day. According to the department, Virginia's 7-day moving case average peaked at 5,904 on Jan. 8, 2021—a number thousands short of McAuliffe's case assessment.

McAuliffe's campaign did not respond to a request for comment on his claims.

McAuliffe used the inflated statistics during the roundtable to advocate for extreme COVID-19 mitigation efforts such as mask requirements and vaccine mandates.

McAuliffe also falsely called his Republican opponent, Glenn Youngkin, an "anti-vaxxer." While Youngkin opposes state-imposed mask requirements and vaccine mandates, he has received the vaccine and aired ads urging all Virginians to get the COVID-19 vaccine.

Thirteen, or 0.09 percent, of Virginia's 13,075 deaths attributed to COVID-19 were of individuals younger than 19 years old. 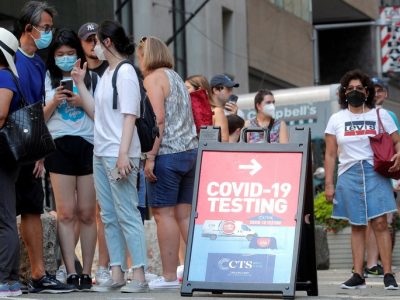